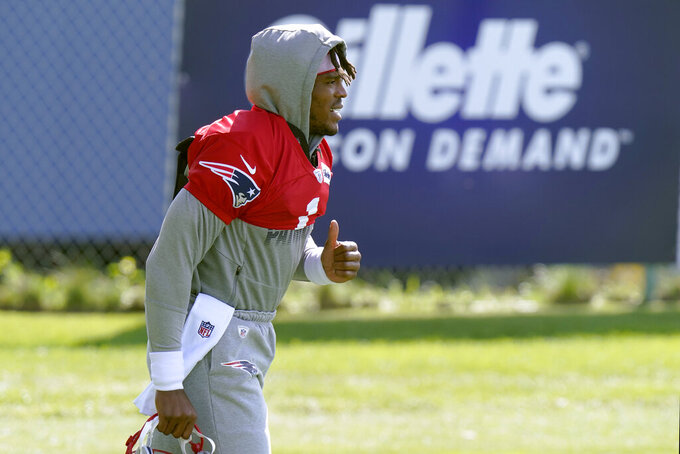 FOXBOROUGH, Mass. (AP) — Cam Newton isn’t concerned with whether he’s the front-runner to be the Patriots’ starting quarterback.

For now, strengthening the bonds he’s building with his new teammates and getting a deeper grasp of the playbook is what’s most important to him.

But with less than two weeks left of training camp, Newton seems to be distancing himself from second-year Jarrett Stidham and veteran Brian Hoyer in the competition to replace Tom Brady.

Newton’s reps during practices have increased and he is most often paired with players expected to have key roles in the offense.

His teammates are also responding to the unique brand of energy he brings to the field.

Whether Newton is dancing during pre-practice warmups, or perfecting intricate and personalized handshakes in the huddle with each member of the offense, he’s slowly putting his stamp on a culture that's long discouraged such individualism.

“It’s extremely important, especially for me as a person,” Newton said. “Anybody who knows me knows that it’s all about the vibe that you have to set and you curate, and in essence, we want to change that word ‘vibe.’ It more or less becomes the standard.”

Receiver Damiere Byrd said the handshakes are from Newton’s time with the Panthers. They were teammates together in Carolina from 2016 to 2018.

“It’s just a way to get the energy going and get the vibe going and really kind of just pull everybody together," Byrd said.

Newton admits, though, he borrowed the handshake idea from another well-known athlete.

“I kind of bit off somebody else’s swag with LeBron (James). I saw LeBron years ago have different handshakes for every single person on the roster. And I was like, ‘Man, that’s pretty cool,’” Newton said.

“We all have indirect and direct ways to hold each other accountable, and it keeps you locked in practices so we can keep everybody’s energy level at an all-time high.”

It’s been apparent recently when Newton has noticed something amiss during a drill or scrimmage session. During breaks he can often be seen working those issues out with his receivers, be it a mistimed route or a read he may have missed.

It's also helped coach Bill Belichick get to know him better.

Newton previously acknowledged that he was curious about how he and Belichick would coexist, considering the outside perception he had about the Patriots’ closely controlled environment.

But Belichick has welcomed the energy Newton has brought.

“I think that’s Cam’s personality," Belichick said. “Look, all the players on the team, we’re all different. We all have different personalities and that’s what makes up a team, that diversity of people. ... It will be interesting to see how it all comes together. Each team forms its own chemistry. Certainly, Cam is an important part of that.”

“There’s been some things that a lot of people may have not known about me prior to (joining the Patriots),” he said.

It’s also why he says he’s not doing anything extra to assume the leadership reins of the team.

“At the end of the day, you cannot be negated off of the person who you really are. That’s what just happens,” Newton said. “You want to be more of the leader that leads more by example than anything else.”

NOTES: RB Sony Michel, who began the season on the physically unable to perform list, returned to practice Wednesday. ... Newton said the recent police shooting of Jacob Blake, a Black man in Wisconsin, struck a cord with him. “It’s just disheartening," he said. “What’s going on in this country of ours at times is extremely disgusting. And until we find a fix, I think more than ever, we have to unify and become one as much as possible. From the Black Lives Matter campaign, from the social injustice, bringing awareness with that, and just everybody becoming more aware of certain things and not necessarily turning their ear or turning their face (away from) things that are extremely blatant.”