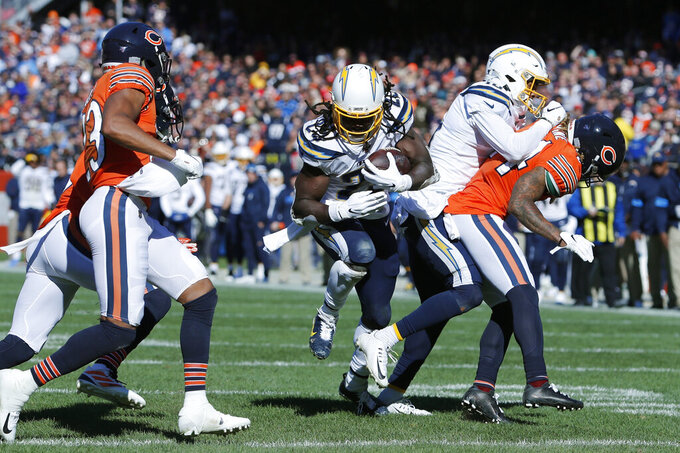 Los Angeles Chargers running back Melvin Gordon, center, scores on a 19-yard touchdown run during the first half of an NFL football game against the Chicago Bears, Sunday, Oct. 27, 2019, in Chicago. (AP Photo/Charles Rex Arbogast)

The numbers paint a convincing picture.

The Chargers had 36 yards on the ground in their 17-16 victory at Chicago, marking their fourth straight game with less than 40 yards rushing.

According to Pro Football Reference, it's the third time since 1940 that a team's ground game has been that ineffective for that long. The prior two are the 1946 Detroit Lions and 1944 Card-Pitt, a combined Chicago Cardinals-Pittsburgh Steelers team due to World War II.

How the running game might be affected by a new voice running the offense will be a major topic going into this week's game against Green Bay after coordinator Ken Whisenhunt was fired Monday night. The Chargers are ranked 28th in the league in rushing offense at 69.5 yards per game. It's their second-worst total in franchise history after eight games.

In losses to Denver and Pittsburgh, the Chargers fell behind by two scores early and had to abandon the running game.

But the last two games have been closer and they have run on only 32.4% of their plays. The win against the Bears marked only the sixth time in 28 games since 2000 that the Chargers have passed on 71% or more of their plays and won. Los Angeles ran it only 12 of 42 plays.

Lynn said one reason for the lack of run plays against the Bears was they were in no-huddle mode more, which lends itself to the passing attack.

There have been other factors in the troubling stretch, like the return of Melvin Gordon and shuffling along the offensive line.

Gordon is averaging 2.6 yards on 44 carries and has only one gain of over 10 yards since ending his two-month holdout. Austin Ekeler, who was among the AFC leaders in scrimmage yards during Gordon's absence, had three carries for 3 yards against the Bears.

"It was back and forth Mel and me, Mel and me. When you are like that, you play a little bit and the offense isn't really on the field and nobody gets into the rhythm," Ekeler said after the game.

The offensive line might be getting some stability with the return of left tackle Russell Okung, who played for the first time Sunday after missing the first seven games due to blood clots. Scott Quessenberry is at center after the season-ending neck injury to Mike Pouncey.

The defense is consistently preventing teams from scoring touchdowns in goal-to-go situations. The Chargers held the Bears to a pair of field goals during the second quarter to keep them in the game after Chicago had controlled the first half. The Bears had seven straight plays inside the Chargers 4 late in the second quarter but could only muster a field goal.

Los Angeles has a 45.5% touchdown allowed percentage in goal-to-go, which is third best in the league. The league average is 68.8%.

Run defense. Chicago's David Montgomery became the third opposing back to put up a 100-yard game. The Chargers allowed only two 100-yard rushers last season and only five to gain 75 yards or more.

The Bears had 10 of their 38 attempts go for 5 yards or more. The Chargers are allowing 122.8 yards per game on the ground, which is 17 more than last season.

Joey Bosa is the first Charger to post multiple sacks in consecutive games since Kevin Burnett in 2010. In addition to his two sacks, Bosa had seven tackles, including four for loss. He is tied for second in the AFC with seven sacks.

Keenan Allen led the NFL in receptions four weeks into the season but has struggled the past four games. He has 17 receptions out of the 33 times he has been targeted in October, compared to his 34 receptions in 47 targets during September. Allen had seven catches for 53 yards Sunday, but repeatedly slipped on the turf and dropped a touchdown pass during the fourth quarter.

48.6 — Gross yards punting average for Ty Long. That leads the AFC and is second in the NFL.

Okung suffered a groin injury during the fourth quarter, but Lynn thought it would not sideline him.

The second half of the season begins with a difficult test against Green Bay (7-1). It will be played in Southern California, but with many expecting at least 80 percent of the fans to be rooting for the Packers, it likely will feel like Lambeau Field West.