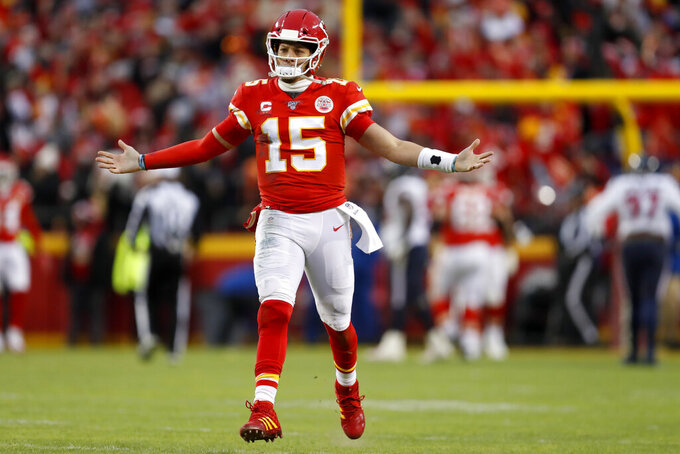 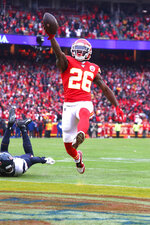 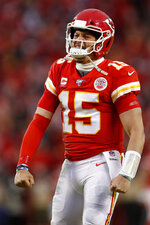 KANSAS CITY, Mo. (AP) — Patrick Mahomes and the Kansas City Chiefs are back in the AFC championship game.

How they returned to the brink of their first Super Bowl appearance in 50 years was unlike anything anybody could have imagined.

After digging a 24-0 hole against Houston early in the second quarter Sunday, Mahomes and the rest of the high-flying Chiefs embarked on the biggest comeback in franchise history. Their young superstar proceeded to throw for 321 yards and five touchdowns, Travis Kelce and Damien Williams reached the end zone three times apiece, and Kansas City reeled off 41 consecutive points in a 51-31 victory over the Texans in the divisional round of the playoffs.

The Chiefs (13-4), who lost to the Patriots in overtime in last year's conference title game, will play Tennessee next Sunday for a spot in Miami. The Titans stunned Lamar Jackson and the top-seeded Baltimore Ravens on Saturday night.

Watson, meanwhile, threw for 388 yards and two touchdowns while running for another, but not even his heroics could bail out the Texans (11-7) after they were outscored 28-0 in the second quarter. They continued to allow Kansas City to pull away during a dismal third, their epic collapse leaving the reborn Houston franchise 0-4 in the divisional round.

The Chiefs certainly gave them the perfect opportunity to finally break that streak in the first quarter.

On defense, Kansas City blew overage on Kenny Stills on the opening possession, allowing him to walk into the end zone from 54 yards. On offense, they wasted timeouts, dropped a series of easy passes and managed just 46 yards. And on special teams, the Chiefs had a punt blocked for a score and fumbled a return that set up another touchdown.

Indeed, the Texans were humming right along after finishing on a 22-3 run to beat Buffalo last week, while the mountain of miscues made by the Chiefs made them only the fourth home playoff team to trail 21-0 after the first quarter.

Then it was the Texans' turn to struggle.

They had stretched the lead to 24-0 before the Chiefs, whose largest deficit overcome had been 21 points, put together a comeback for the ages. Mahomes hit Williams with a quick touchdown toss to begin it, then Houston curiously faked a punt at its own 31-yard line and was stuffed, giving the Chiefs a short field and another easy touchdown.

On the ensuing kickoff, Texans return man DeAndre Carter had the ball pop loose and into the arms of Darwin Thompson, whose return set up a second Mahomes-to-Kelce touchdown in a matter of seconds. And a third came after the Chiefs forced a punt — a successful one, for a change — and they drove 90 yards to take a stunning 28-24 halftime lead.

GREEN BAY, Wis. (AP) — Aaron Rodgers connected with Davante Adams eight times for 160 yards and two touchdowns, Green Bay's spruced-up defense fended off a spirited Seattle rally, and the Packers held on for a victory to reach the NFC championship game for the third time in six years.

Aaron Jones rushed for 62 yards and two first-half scores for the Packers (14-3), who will travel next weekend to take on top-seeded San Francisco.

Russell Wilson carried the Seahawks (12-6) on yet another comeback, this time from a 21-3 halftime deficit, but the Packers forced a punt just before the two-minute warning on the second sack of the game by Preston Smith. That was Green Bay's fifth of the game. Za'Darius Smith, the other big-money free agent added to the defense last spring, had two sacks himself.

Rodgers sealed the win with two third-down throws: first a 32-yard pass to Adams on third-and-8 with 2:19 left and then 9 yards to Jimmy Graham on third-and-9 right after the two-minute warning to take down a Seahawks team that was 8-1 on the road this season entering the game.

Rodgers exacted some payback for five years ago, when the Packers blew a 16-0 halftime lead in the NFC championship game at Seattle and lost 28-22 in overtime. The Seahawks haven’t been back to the conference title game since, let alone the Super Bowl. Rodgers is running out of time faster than Wilson, though, nine years after his only championship.

Racking up 64 yards rushing on seven scrambles and completing 21 of 31 passes for 277 yards, Wilson directed touchdown drives of 69, 84, 79 right out of the gate after halftime. Lynch finished two of them with scores, and Wilson threw to Tyler Lockett for the other one.

Lynch’s second touchdown with 9:33 left cut the lead to 28-23, but Jaire Alexander blew up the 2-point conversion attempt with a sack on an unblocked blitz. The Packers gave the ball back to the Seahawks with a second consecutive punts, this time with 4:54 left at the Seattle 22, but Wilson ran out of tricks in his seemingly bottomless bag of them.