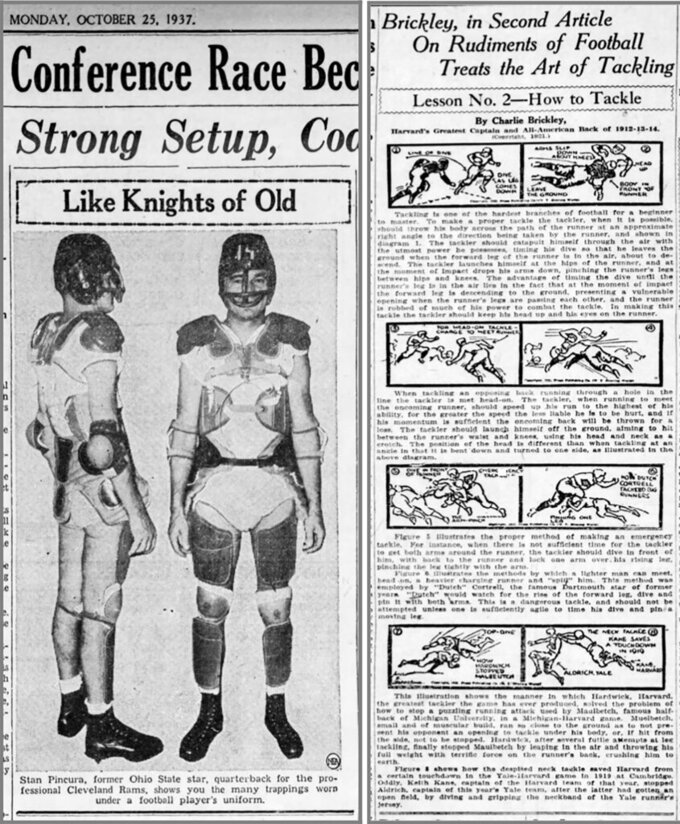 This combination of newspaper clippers show, at left, an Oct 25, 1937 clipping from the Mount Carmel Item with an image of Cleveland Rams quarterback Stan Pincura in padding worn in a game; and an Oct 27, 1921 article from the St. Louis Post-Dispatch by former Harvard football player Charlie Brinkley on the art of tackling. (Mount Carmel Item, left; St. Louis Post-Dispatch, right, via AP)

Football helmets are almost as old as the game itself and, by now, about as safe as they’ll ever be.

The polycarbonate outer shell flexes at impact to redistribute shock, yet remains strong enough to ram a car windshield at 40 mph without cracking. The facemasks wrapped around them are space-age steel. The layered construction and medical-grade foam underneath provide the cushioning equivalent of industrial-strength bubble wrap.

But just like those jerry-rigged helmets made from leather, felt and rubber introduced around 1900, they can’t stop concussions, but they can turn men with bad intent into missiles. That discovery launched an arms race between safety and mayhem that continues to this day.

“When we began researching helmets, one of the first arguments was, ‘Aren’t you just making a better weapon?’” recalled Stefan Duma, director of the authoritative and independent Virginia Tech Helmet Lab, founded in 2011.

“That wasn’t the intention, but I agreed completely with the assessment. … Anytime you put that much force and effort around somebody, there will be risk. That’s why enforcement is a key piece.”

An unbroken line of brutal defenders and spectacular collisions, among other things, helped turn the NFL into must-see TV. Indeed, many of its most-enduring images are photos capturing the devastation those missiles caused, especially after the league switched from hard leather to even-harder plastic helmets in 1950.

Think of Eagles linebacker Chuck Bednarik celebrating his knockout of Giants receiver Frank Gifford. Or Raiders safety Jack Tatum, who was dubbed “Assassin,” gingerly stepping back after a hit that left Patriots receiver Darryl Stingley paralyzed from the waist down.

In fact, rules “against butting with the head” were on the books before 1900, too. But they were unevenly enforced until the scope of the game’s concussion problem became apparent in recent years. In March, 2018, in response to what NFL executive Jeff Miller called “a greater incidence of this behavior,” the league approved a new rule instructing officials to penalize any player who lowers his head to initiate contact.

While that remains a judgment call, players on the field long ago developed their own rule to deal with head-hunting: Do unto others before they do unto you.

“You always know who’s on the field and what they do, so I always felt like I was going to be the hammer and not the nail. Like I always had to bring it just as hard they did,” said Martellus Bennett, who retired in 2017 after 10 seasons playing tight end with the Cowboys, Giants, Bears, Packers and Patriots.

Bennett, 32, believes better enforcement of the rules and less contact in practice and training camp have already benefited players who followed him into the NFL. And the league’s public acknowledgement in 2016 of a link between football and the long-term damage caused by repeated concussions — a condition known as Chronic Traumatic Encepholopathy, or CTE — means those same players understand the risk.

And yet, the few games he watches each season look as dangerous as ever.

“I knew some body parts would be aching for a long time after I was done playing. But one thing I didn’t sign up for was brain problems, and I’m happy to say I don’t have any of those.”

“Maybe,” Bennett joked a moment later, “I benefited from being 6-foot-7. My ankles are bad, but that’s because everybody just tackled my ankles.”

Not every player is that lucky. Participation in boys high school football programs has dropped by 10 percent nationally over the last decade, according to the National Federation of State High School Associations, owing in large part to parents’ concerns about concussions. That has left the game’s stakeholders scrambling for ways to make it safer. But research tells Duma the answer won’t be better helmets.

“There might be some tweaks going forward,” he said. “But I’d say we’re 95 percent of the way there now.”

Duma also takes issue with those who point to rugby to argue football would be safer by ditching the helmets altogether. That, he said, would wreak even more havoc.

“It’s a red herring. People say take the helmet off, or the facemasks off, and see what happens. Well, we followed the U.S. rugby team for several years and the concussion rate is almost three times what it is in football,” he said.

“Half the team was concussed by the end of every season. And that’s in addition to broken noses, facial cuts, fractured orbital bones and all kinds of other injuries,” Duma added.

With equipment nearly optimized, and enforcement of the rules presumably improving, the NFL has latched onto a back-to-the-future instructional program called “Heads-Up Tackling” to convince fans the game can be made safer.

It’s been called “low tackling,” “form tackling” and “proper contact” at different times over the last 120 years and purports to teach players to tackle while placing their heads on either side of an opponent’s body. Just like the introduction of the helmet, it was a response to widespread reports of deaths and injuries, conceived and promoted by some of the best-known coaches of the day.

It didn’t work then. Bennett has less hope for “safe tackling” now.

“Actually, there’s one place it might work,” Bennett chuckled during a break from staging fan football clinics for Dos Equis. “On paper.”