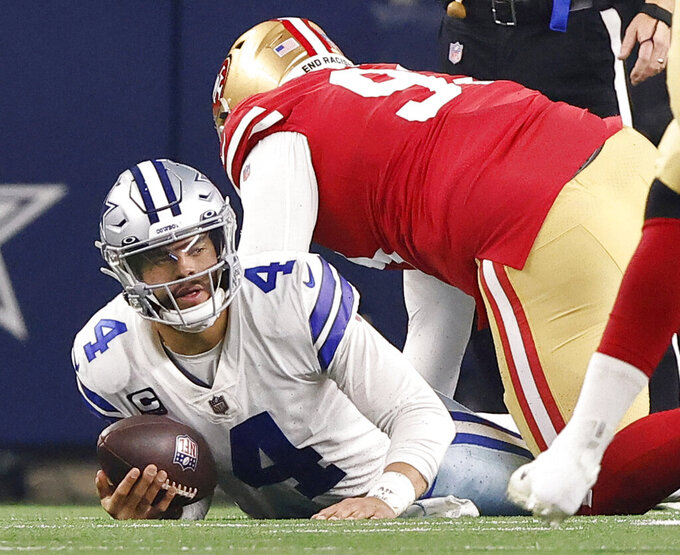 FRISCO, Texas (AP) — Dak Prescott apologized Tuesday night for his comments that condoned Dallas Cowboys fans throwing objects at NFL officials after the team's playoff loss, with the quarterback saying in a series of tweets that he deeply regretted what he said after the game.

When initially asked about objects such as water bottles being thrown at Dallas players as they left the field at the end of their 23-17 wild-card loss to the San Francisco 49ers on Sunday, Prescott said it was “sad” fans would do that. After another reporter said it appeared that officials were the targets, the quarterback responded, “Credit to them then.”

When given another chance to answer a question about fans throwing objects at officials, Prescott said, “I guess it’s why the refs took off and got out of there so fast. I think everybody was upset about the way that this thing played out.”

Prescott had since received plenty of pushback nationally for his comments, even drawing the ire of NBA referees.

“I deeply regret the comments I made regarding the officials after the game on Sunday. I was caught up in the emotion of a disappointing loss and my words were uncalled for and unfair,” Prescott wrote in the first of consecutive posts on his verified Twitter account Tuesday night.

A second post immediately followed, “I hold the NFL Officials in the highest regard and have always respected their professionalism and the difficulty of their jobs. The safety of everyone who attends a game or participates on the field of a sporting event is a very serious matter.”

In the third, he wrote, “That was a mistake on my behalf, and I am sorry.”

The playoff loss ended after Prescott gained 17 yards on a quarterback draw to the 49ers 24, and the Cowboys were unable to spike the ball in time to stop to clock for one more play. Umpire Ramon George bumped into Prescott when officially marking the ball after Prescott's run before time ran out.

“The NBRA condemns the comments by Dak Prescott condoning violence against game officials. As an NFL leader, he should know better. We encourage the NFL to take action to discourage this deplorable behavior in the future,” read the post on the @OfficialNBARefs account earlier Tuesday.