On Football: Officiating not much of NFL issue thus far 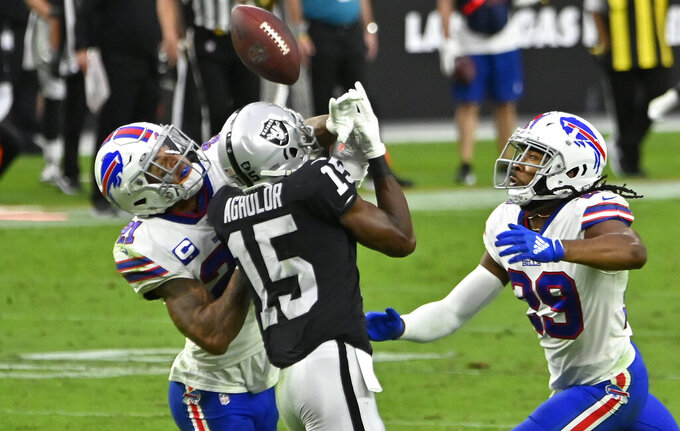 With so much else going on in the pro football world, it's probably no surprise that officiating has not been on the front burner.

For sure, there have been some debatable calls, including the mess-up on Monday night in Kansas City that sent Patriots coach Bill Belichick into such a rage he apparently forgot to throw the challenge flag. Or he didn't realize his team wasn't getting the ball on what clearly was a Chiefs turnover.

Aside from that, things have been rather tame. And the league's former chief of officiating, Mike Pereira, points to several reasons why.

“What I have seen is a group of officials who were under the gun because they didn’t have preseason football and training camps and not any in-person clinics," says Pereira, now an analyst for Fox. "There are 11 new officials just this year alone who never stepped on a field for a regular-season NFL game, so in my mind they were not as prepared as in the past.

“That said, my conclusion is that this group has done a really good job of listening to what they told them. (Officiating supervisor) Walt Anderson told them to make all your calls clear and obvious — like the terminology that goes in instant replay. They have followed the edict, the numbers of fouls are down incredibly. It is a bit distorted because we began the 2019 season with an emphasis on backside holding and there were so many calls. Certainly a lot more than we are seeing; I think the number this year is about (13) penalties per game, less than in the past. ... Great. I say, `WOW.′ "

Through four weeks, the league also is getting fewer complaints from the clubs about specific calls. Wisely, the NFL has instructed the teams that only the most obvious and impactful calls would be made early in the season as everyone gets their footing, Pereira notes.

“They did tell the clubs, 'This is what we told the officials and here is why,′ “ Pereira explains. "At some point the coaches and everybody understood it. The remarkable thing is with the dramatically less number of holding calls, the number of questions sent in are less than were sent in last year to the league office. It is almost like everybody is buying into it.

"I am not saying, 'You said to them let them play.′ No, that's not the same as making your calls off what is clear and obvious. Don’t be ticky-tack. If you have any evidence of doubt, don’t throw it. If it is clearly a foul, then throw it.

It's also encouraging that the new wave of on-field officials, which began with numerous retirements in recent years, is producing efficient replacements for the veterans. While Pereira — and everyone still at the NFL's officiating department — prefers experience to athleticism, if you will, as officials age and leave the league, it's paramount that the newcomers can carry some of the weight.

Pro football is a difficult game to officiate, and the men in stripes are burdened by a rulebook that gets more complex annually, with tangents and offshoots to virtually every rule. Asking the players to bench press the rule book would be cruel and inhuman punishment.

Then there's the addition of needing to wear masks during games, which is new. So are some of the remote whistles. And the required COVID-19 testing — all necessary, of course.

“They are more prepared (today)," Pereira says of the newer NFL officials. "We went into cycles in terms of preparation. We had an extremely prepared group of college officials when we had NFL Europe. And they worked games, and under NFL rules, and they spent a week at a time working with NFL supervisors and got great prep.

“Then it went away and we were pulling a lot of guys right out of college and they did not have that prep. That cycled down, and I don’t think the new people we had were as prepared as when they had the NFL Europe experience.

“Now it has cycled around, mainly because someone came up with idea of putting together a group that were members of the officiating development program. They brought them to clinics and had them participate in rules tests, in preseason games. When they didn’t have a college game and lived in a city with an NFL game, they could go to the pregame conference and the officials’ locker room to spend time with a crew. As a group they are as equally as well prepared or maybe even more now because it is on an ongoing basis they get this prep, as when we had NFL Europe."

There also has been a modicum of experience officials have gotten from the Alliance of American Football and the XFL, which used mostly NFL rules.

So Pereira is heartened by what he has seen and what might be ahead.

“Maybe the expectations were lower this year," he says, “but regardless, they are doing what they have been told to do, and that's been encouraging.”