Greg Olsen's playing days with Panthers over after 9 seasons 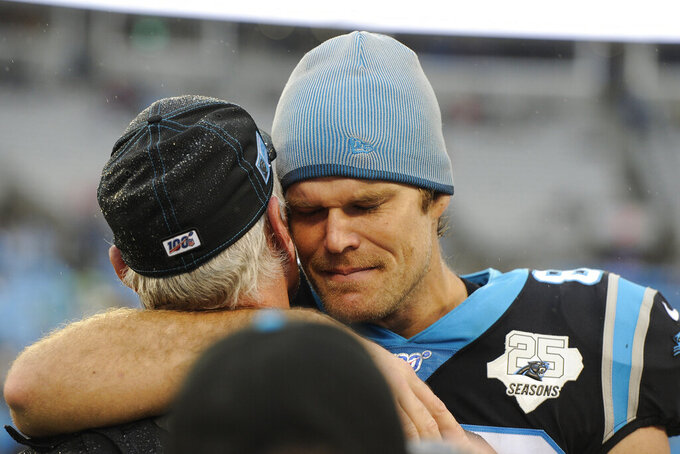 CHARLOTTE, N.C. (AP) — Greg Olsen's playing days with the Carolina Panthers are over.

The 34-year-old tight end announced on Twitter Thursday that he'll be leaving the team, calling it a mutual decision that followed a meeting with general manager Marty Hurney.

Olsen has one year remaining on his contract and is due to cost $11.675 million against the salary cap in 2020. If the Panthers release him, they would be on the hook for $3.7 million in dead cap money. If he retires, the team could recoup that money.

"The team and I are both on the same page that it is best we go in different directions for now," Olsen said. “On the field, I will always cherish the nine seasons we shared together. The wins, the losses, standing at midfield holding the Halas Trophy as NFC champs. The reality of going to the Super Bowl was beyond words, as was the disappointment of falling short.”

Olsen could try to continue playing or venture into broadcasting, something he has dabbled in successfully.

“I still have the love of football in my heart and will explore all career opportunities presented to me,” Olsen said.

The 13-year veteran ranks fifth among tight ends in receptions (718) and yards receiving (8,444). He had 6,463 yards receiving and caught 524 passes in nine years with Carolina, the most by any Panthers tight end.

Middle linebacker Luke Kuechly announced his retirement earlier this month. The team also could be making a move a quarterback. Carolina can save $19 million under the salary cap by trading or releasing veteran Cam Newton this offseason.

Olsen was a popular figure in the community. He was twice named a finalist for Walter Payton NFL Man of the Year.

Olsen missed just two games during the first 10 years of his career, but foot injuries slowed him in 2017 and 2018. He played in 14 games last season, catching 52 passes for 597 yards and two touchdowns.

Hurney added: “Greg's meant so much to this organization and we have a tremendous amount of respect for him. He earned a reputation as one of the best tight ends in the league and served as a great leader and team captain. As special as he was for us on the field, his impact on the community is just as impressive. We are proud that he wore a Panthers uniform.”