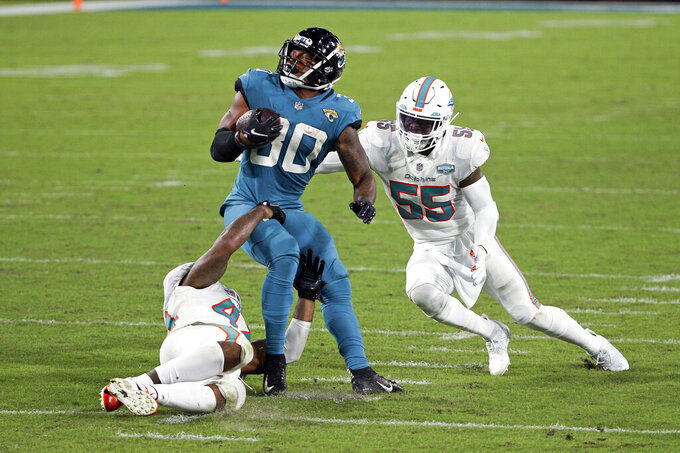 Jacksonville Jaguars running back James Robinson, center, looks for a way to get past Miami Dolphins outside linebacker Elandon Roberts, left, and outside linebacker Jerome Baker (55) during the second half of an NFL football game, Thursday, Sept. 24, 2020, in Jacksonville, Fla. (AP Photo/Stephen B. Morton)

Top-tier players are getting hurt all around the league, but there are still some fantasy studs we can rely on in what has been a highest-scoring NFL season.

These are my best bets at the running back and receiver positions to reach the end zone in Week 4.

Now we see why the Jaguars were willing to let go of Leonard Fournette. Robinson is getting similar usage to what Fournette was getting in 2019, and he’s already tied Fournette’s TD total for that season (three). In Week 3, Robinson got all of the goal-line plays. This week, he’ll go up against a Cincinnati defense that covers the pass well, but is the seventh-best matchup for RBs in the league. They’ve given up the third-most rushing scores (four), and Robinson should make it at least five.

Tied for the league lead in TDs (four), Cook has been the one consistent factor in the Vikings offense in the first three games. Only three backs have averaged more snaps than Cook during that time, and none has as many scores. With a 40.13% TD dependency, Cook should have little trouble reaching the end zone against the Texans, who are the third-best matchup for RBs going into Week 4.

Kamara only had six carries in Week 3, but he led the team in targets (14), scoring twice. Leading all RBs in scoring (six TDs) and fantasy points per game (26.6), Kamara is having quite the bounce-back year. Yes, Michael Thomas’ return may have some effect on Kamara’s targets, but he’ll remain the main conduit through which the Saints’ offense runs — especially with Drew Brees' slow start thus far. The 45.11% TD dependent Kamara gets the Lions this week, our fourth-best matchup for RBs.

Conner was in on 66% of the snaps for the Steelers, but he received 22 touches in the game, with the next-closest back getting only seven. The top goal-line option for Pittsburgh, Conner seems comfortably safe in his role and he gets to face the Titans’ fifth-worst run defense this week. This is a Titans team that just allowed Dalvin Cook to reach a career high in yards last week.

Jordan Wilkins took away a few touches from Taylor in Week 3, but that was in large part because of the comfortable lead the Colts were playing with against the Jets. Indianapolis should have a tougher time against the Bears (3-0), albeit a Bears team that has allowed the third-most rushing TDs in the league (four) to this point. Chicago also has one of the strongest pass defenses going right now, so the 31.5% TD dependent Taylor should continue to have the edge over Nyheim Hines in usage.

With a 40.34% TD dependency, Ridley is fantasy’s No.1 WR going into Week 4, with 4 TDs so far and a possibility that Julio Jones may miss the game. Ridley is a strong bet to score regardless, as two of his TDs came in Week 1, where Jones played the entire game. The Falcons play the Packers this week, our 10th-best WR matchup, and the game could be high scoring — Vegas has the combined score betting line at over/under 58 points, which in part means they’re proposing it will be the highest-scoring game of the week. Ridley scoring in Monday's game seems likely.

When you’re the star WR on the league’s best offense, you’re going to get plenty of scoring opportunities, and Hill is capitalizing on that fact (41.28% TD dependency). He’s tied for second in WR TDs (three) right now, and that number is likely to go up in Sunday's matchup with the Patriots. If the Patriots’ Week 2 matchup with the Seahawks is any indication, this will be a high-scoring matchup, and New England is our fifth-best WR matchup on this week’s schedule. Yes, they tend to take away the opponent's best playmaker, but the Chiefs have at least three players, including Hill, that you could consider in that category and the Patriots could struggle to stop all of them throughout the game.

Robert Woods has the edge over Kupp in snaps this season, but it’s hard to deny the red zone prowess that Kupp has as the second-highest scoring WR in fantasy in 2019 (10 TDs). The Rams face the Giants this week, and they’re the seventh-best matchup for WRs in addition to being one of the worst teams in the league.

Parker has only one TD this season, but he’s been banged up and he gets 10 days from his previous game to heal up for a game against the Seahawks, who have the worst pass defense in the NFL. Third in WR receiving TDs last season, Parker is a strong bet to reach the end zone this week.

The Chargers have a tough matchup with the Buccaneers this week, but with Allen commanding 19 targets in Week 3, almost 42% of the offense’s total targets, he’s got great odds to reach the end zone in Week 4. He is rookie QB Justin Herbert’s favorite option, and it looks as if Herbert will start again this week as Tyrod Taylor continues to heal from an injury.