Jets GM Douglas has 'sense of urgency' to win with Darnold 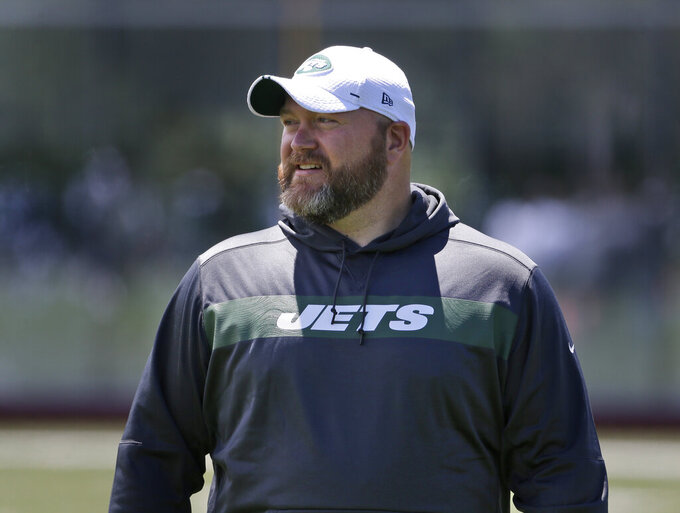 FLORHAM PARK, N.J. (AP) — Joe Douglas stepped to the podium with a big smile — and plenty of pressure.

The new general manager of the New York Jets is a burly, bearded symbol of hope for a franchise desperate to find its way back to respectability.

The 42-year-old Douglas paid his dues for years as an assistant in the front offices in Baltimore, Chicago and Philadelphia. He's now the main man for the first time, and he assured Jets fans that he's more than up to the task.

"You're getting a general manager that is a relentless worker," Douglas said Tuesday during his introductory news conference at the team's facility. "Someone that understands a winning culture. Someone that is going to strive to put a product on the field each Sunday that competes for greatness and that I hope will make you proud."

Douglas' hiring last Friday night marked the end of a tumultuous offseason stretch for the Jets, who stunningly fired Mike Maccagnan last month — only weeks after he oversaw the team's draft, spent big bucks in free agency and played a key role in hiring Adam Gase as coach to replace Todd Bowles.

The timing was odd, and the Jets were criticized by some for appearing to lack focus and direction.

Now, they have Douglas and Gase, who built what the GM called "a special bond" during a stint with the Bears and can't wait to turn things around in New York.

The Jets haven't made the playoffs since the 2010 season, when Mike Tannenbaum was the GM and Rex Ryan the coach. New York is now on its third GM and second coach since the franchise finished one win away from getting to the Super Bowl — in which it hasn't appeared since 1969.

"Simply stated, Joe is the right person at the right time who our fan base will get to know and love," team chairman and CEO Christopher Johnson said. "I feel that we now have the right people in charge of our football operations."

Douglas didn't make any bold proclamations or flashy guarantees, but acknowledged he's stepping into a unique situation — mainly because he's already got a franchise quarterback in Sam Darnold leading the way.

"There's a lot of exciting pieces on this roster," Douglas said, pointing out linebacker C.J. Mosley and running back Le'Veon Bell. "But it starts and stops with quarterbacks. It's the most important position in all of professional sports."

Darnold is entering his second NFL season and coming off an impressive season-ending stretch during which he threw six touchdown passes and just one interception while completing 64% of his throws in his final four games.

"I think there's going to be that same urgency anywhere, but especially here with a young quarterback like Sam."

Douglas will have control over the 53-man roster, and he and Gase will report directly to Johnson. The coach and GM aren't concerned about any perceived potential conflicts where they might not be on the same page — something that apparently caused some friction between Gase and Maccagnan, although both insisted that wasn't the case.

"We're both competitors," Gase said. "And we hate losing."

Douglas and Gase spent only the 2015 season together in Chicago, but Douglas said he and Gase — then the Bears' offensive coordinator — clicked instantly and recognized that they shared similar philosophies on building a winning program.

"His evaluation skills are unbelievable," Gase said of Douglas. "Coaches trust him. Like, you don't hear the squabbles because he does such a great job of evaluating players."

Gase, known for having a high-energy personality on and off the field, thinks there's already a comfort level between the two.

"He's such an easy guy to connect with," Gase said. "He probably likes my insanity a little bit."

After Johnson told Gase last Friday night that he decided to hire Douglas, the coach quickly reached out to his old buddy — a few times.

Douglas reiterated that he learned collaboration between the front office, scouts and coaches is the way to be successful, first in Baltimore under Ozzie Newsome and then in Philadelphia under Howie Roseman.

There were reports that Douglas was going back-and-forth during the interview process, trying to decide whether to stay with the Eagles or join the Jets.

"I would say that if there were serious reservations, I wouldn't be here answering the questions that I'm answering," Douglas said. "We had the interview (last) Sunday and then had multiple discussions up until Friday night that led to me being here."

Douglas said he would spend the rest of this week getting together with the coaching staff to go over the roster, check out the remaining practices and begin to put his front-office staff together.

And then, they'll prepare for the season.

"This is a game of wills," Douglas said. "And we're going to try to build a team that can impose its will on other teams."