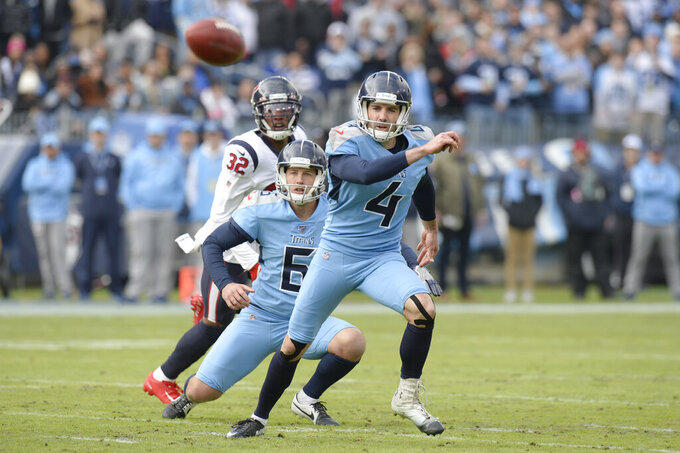 Tennessee Titans kicker Ryan Succop (4) and holder Brett Kern (6) chase after the ball after Succop's 45-yard field goal attempt was blocked by the Houston Texans in the first half of an NFL football game Sunday, Dec. 15, 2019, in Nashville, Tenn. (AP Photo/Mark Zaleski)

NASHVILLE, Tenn. (AP) — The Tennessee Titans are having one of the NFL's worst seasons kicking field goals in decades, and now they're turning to their fifth kicker this season.

The Titans placed veteran Ryan Succop on injured reserve Wednesday for the second time this season and signed Greg Joseph off Carolina's practice squad a day after waiving kicker Ryan Santoso after he struggled on kickoffs.

That's 22.3 percentage points lower than the Jets, who rank 31st in the NFL this season connecting on 66.7% of their field goals. With two games left, the Titans are set for worst season since 1983 when New England finished at 40.9% followed by Tampa Bay at 41.7% and Bills at 42.3%, according to ESPN Stats and Info.

The Titans' kicking issues have cost them in at least two games this season as Tennessee (8-6) chases a playoff berth.

Succop had a 45-yard field goal blocked in Sunday's 24-21 loss to Houston as Tennessee missed a chance to take the lead in the AFC South with two games to play. Succop was 1 of 6 on field goals since returning from injured reserve. He spent the first eight weeks on injured reserve trying to heal from offseason surgery on his right kicking leg.

The Titans signed Succop to a five-year contract in 2018, and the 33-year-old kicker remains under contract through 2022. He came into this season making 83.6 percent of field goals in his career.

“Whenever Ryan's able to come off injured reserve and starts to kick again then we'll update you on that,” Vrabel said.

Joseph, a native of South Africa, was signed by Miami as a college free agent out of Florida Atlantic where he hit 70% of his field goal attempts. He was waived by Miami after training camp, and he spent 14 games with Cleveland last season. He was 17 of 20 on field goal attempts, including all 11 inside 40 yards.

He joins Succop, Cairo Santos, Cody Parkey and Santoso who have kicked for Tennessee this season. Santos missed a 45-yard field goal in the fourth quarter of a 19-17 loss to Indianapolis in Week 2, then missed three field goals and had a fourth blocked in a 14-7 loss to Buffalo on Oct. 6. Succop missed his first three field goals after being activated off injured reserve.

Being a kicker, yes Joseph noticed what was going on in Tennessee this season before his agent called him Tuesday with news the Titans had signed him.

“I don't wish ill on any kicker ever, but yeah I mean you have to be,” Joseph said. “Part of my job is to be aware of what's going on and all that fun stuff. Yeah, I was just staying ready, doing my part.”