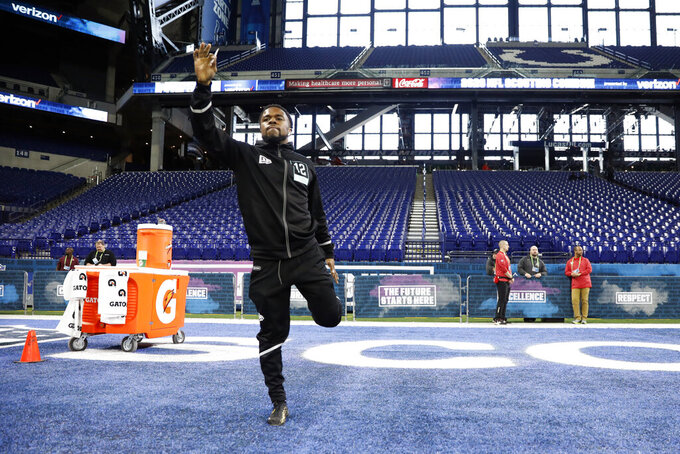 Running back Jonathan Taylor promised to run the 40-yard dash in under 4.4 seconds. He did. Receiver Henry Ruggs III came, literally, a few ticks away from matching the fastest time recorded in the event's 35-year history. Linebacker Isaiah Simmons showed he had receiver-type speed on Saturday, and even the big men turned heads with their fleet feet.

On Sunday, the trend continued with cornerback Javelin Guidry of Utah clocking a 4.29 — the best on the final day of workouts in Indianapolis and tied for third-best among defensive backs since 2003. Only Jalen Myrick of Minnesota in 2017 and Stanford Routt in 2005 posted faster times.

“It was a 4.28 at a Texas camp my sophomore year," Guidry said earlier this week when asked what his fastest 40 was. “I really focused on it (track) when we moved to Texas. Coach Larry Weathers in Austin, he really put it on me to focus on track and running and DB drills as well. He’s a DB coach, but running was the main thing."

Guidry did more than that in Indy. He also posted 21 reps on the 225-pound bench press, tied for fifth among defensive backs.

Jeff Okudah, widely considered the best cornerback in April's draft, didn't have the kind of day he expected.

The former Ohio State player did only 11 reps on the bench press and posted a 4.48 in the 40 before hitting the Lucas Oil Stadium turf while trying to make a spinning catch during one drill. He complained of head and neck soreness, sat out some of the workout, before returning to deliver the best broad jump of the day at 11 feet, 3 inches and a 41-inch vertical jump.

Tristan Wirfs. At 6-foot-5, 322 pounds, Iowa's former offensive tackle might not look like the most athletically gifted player. But he posted a better vertical jump (36.5 inches) than two of the draft's top receivers — Jerry Jeudy (35) and CeeDee Lamb (34-5). He also won three prep state championships in the discus, two in the shot put and was an elite swimmer by age 6. Still don't buy it? There's a video of Wirfs jumping out of the water and straight onto a pool deck.

Isaiah Simmons. The former Clemson linebacker started this week as a potential top-10 pick. He helped himself by running a 4.39-second in the 40, matching Taylor's time and finishing ahead of all but six receivers. He also had the second-best broad jump (11 feet) and tied for third-best vertical jump (39 inches) among linebackers.

Taylor. The fastest running back in Indianapolis also measured in bigger than his two nearest competitors, J.K. Dobbins of Ohio State and D'Andre Swift of Georgia, to be the first runner selected. He outran Swift in the 40 (4.48) with a 4.39, and posted better numbers in the vertical jump and broad jump than Swift, too. An injured ankle, meanwhile, limited Dobbins to only the bench press. Dobbins had 23 reps compared with 17 for Taylor.

Mekhi Becton. A massive 364-pound offensive tackle from Louisville raised eyebrows with a stunning 5.11 in the 40 but may have raised questions with only 23 reps. He tied for 25th among the 39 offensive linemen who lifted — and had two fewer than punter Michael Turk of Arizona State. Next up: Perhaps seeing Becton board a boat at the Bellagio on draft weekend.

Kyle Dugger. The only Division II player in Indy thought he would run in the 4.3's. Instead, his two attempts came in at 4.50 and 4.51, good enough to stay among the top-rated safeties. Plus, he had a 42-inch vertical jump, the best among defensive backs, and the third-best broad jump at 11-fee, 2-inches.

Zack Moss. Of the 28 running backs who competed in the vertical jump, the former Utah player had the seventh worst mark at 33 inches. Worse yet, he hurt his hamstring. Though Moss showed toughness by continuing, he probably should have stopped rather than run a 4.65-second 40, tied for fourth-slowest in the position group.

Laviska Shenault Jr. The 6-foot-1, 227-pound former Colorado receiver played most of last season with a core muscle injury. Only Shenault really knows how much it hurt him at the combine. After posting a less-than-scintillating 4.58-second run Thursday, NFL Network reported he intended to have surgery. The recovery time is expected to be four to eight weeks.

Mitchell Wilcox. Everyone saw the Florida Atlantic tight end get hit in the face by a ball in the gauntlet drill. He never completely recovered from that embarrassing moment, struggling to make catches in other drills, running the third-slowest 40 among tight ends (4.88) and the second worst vertical jump (31).

New drills. Combine organizers adopted 16 new drills and ditched a few old ones to keep up with the evolution of football. Those who watched and participated appreciated the new look and the hope is it might encourage more players to participate in future years.

Scheduling. The revamped schedules got mixed reviews. While the early mornings and late nights have been part of the process for years, the long gap between media interviews and workouts did not make for compelling afternoon television.