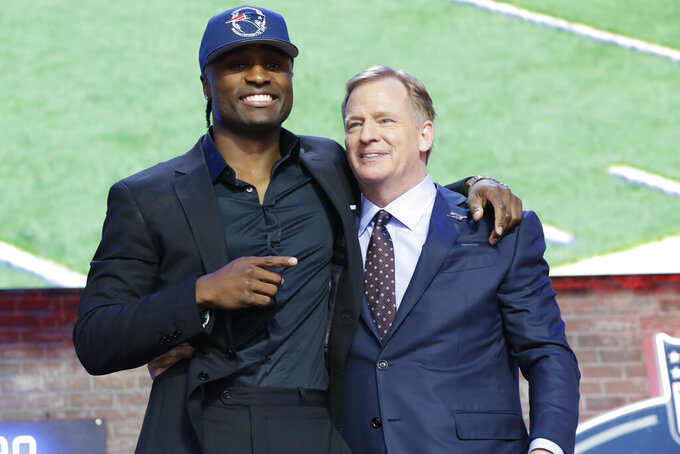 FOXBOROUGH, Mass. (AP) — The Patriots took their first step in upgrading their aging secondary and picked up a versatile edge rusher on a busy Day 2 of the NFL draft on Friday night.

New England chose former Vanderbilt cornerback Joejuan Williams in the second round with the No. 45 overall pick. After a series of trades, they also added defensive end Chase Winovich out of Michigan in the third round with the 77th overall pick. New England ended the third round selecting Alabama running back Damien Harris 87th overall and former West Virginia offensive tackle Yodny Cajuste with the 101st pick.

The Patriots began the night holding two picks in the second round and three in the third. They traded their top pick of the second round (No. 56 overall) and the lowest of their three picks of the third round (101st overall) to the Rams to draft Williams. New England then traded the 64th overall pick to Seattle in exchange for the 77th and 118th (fourth round).

But the Patriots weren't done, trading the 73th pick (third round) to Chicago in exchange for the 87th and 162nd picks, as well as a 2020 fourth-round selection. They then sent the 97th and 162nd picks to the Rams for the 101st and 133rd selections. That leaves New England with seven picks in the final three rounds on Saturday.

At 6-foot-4, 210 pounds Williams is a physical player that showed lots of range in college. He had four interceptions and 14 pass breakups as a junior last season.

Williams said he felt good about the possibility of going to New England after going through a private workout for coach Bill Belichick and his staff. He said Belichick shared that he primarily views Williams as a cornerback, though he is willing to fill any role that's needed.

"I feel like I can contribute anywhere," Williams said.

Winovich is 6-foot-3, 256-pound former Wolverines linebacker that started all 13 games as a senior and earned third-team All-America and first-team All-Big Ten honors. He led the team with 17 tackles for a loss and had five sacks. He has the potential to see a lot of playing time in 2019 as New England looks to replace the production lost by edge rusher Trey Flowers' departure to division rival Miami during free agency.

Known for his ferocious style of play, Winovich said he sees himself as a "junkyard dog" that attacks every task in front of him. It started when he was in about fifth grade, when he ate a live fish to win a $20 bet.

"The value of a dollar I definitely earned it in that moment," Winovich said. "That's kind of been my mantra — outwork everybody."

The pick of Harris was a surprising one, with Sony Michel coming off a rookie season in 2018 in which he rushed for 931 yards and six touchdowns. But Michel dealt with a knee issue during the season. New England is also fond of Rex Burkhead, but he also is coming off a season that saw him miss time with a neck injury.

Cajuste becomes another candidate to replace Trent Brown, who signed with the Raiders in free agency.

Williams also joins Obi Melifonwu, primarily a special teamer, as the tallest players in in the defensive back group.

Most comfortable playing on the boundary, Williams said he is looking forward to picking the brain of Gilmore — an All-Pro last season.

That said, Williams said he feels like he is a natural leader and exhibited those skills at Vanderbilt, breaking down opposing receivers and sharing that information with his teammates each week.

Aside from helping the team prepare for their upcoming opponent, he said it was early practice for what he wants to do after his football career is over.

"I want to be a coach after this game is over with," he said. "This is just helping me get to that level. ... I watch film like I watch 'Game of Thrones' or something. Football just runs in my blood. That's just how I work."