Punter Colquitt's resume too good for Steelers to pass up 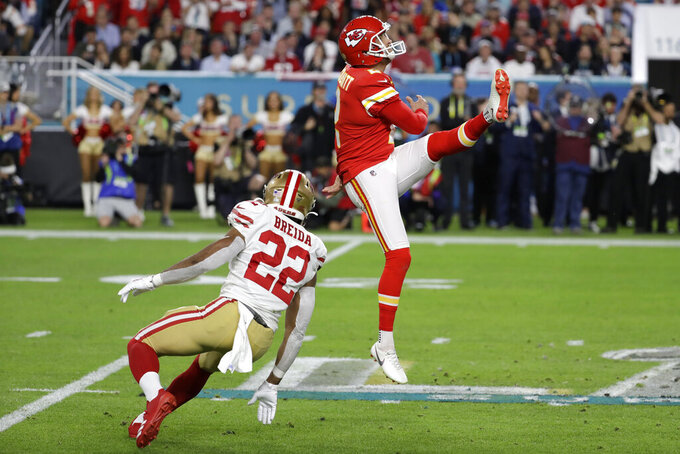 FILE - Then-Kansas City Chiefs punter Dustin Colquitt (2) punts the ball during the first half of the NFL Super Bowl 54 football game Sunday, Feb. 2, 2020, in Miami Gardens, Fla. Pittsburgh signed Colquitt on Monday, Sept. 7, 2020, and he will be in uniform when the Steelers open at the New York Giants on Sept. 14. It was the highest-profile of a series of roster moves Pittsburgh made in hopes of chasing down defending AFC North champion Baltimore.(AP Photo/Seth Wenig, File)

The longtime Kansas City punter has seen a little of everything during his 15 years kicking for the Super Bowl champion Chiefs. And it's that experience that led to the Steelers cutting Jordan Berry to make room for Colquitt on the eve of the 2020 regular season.

Pittsburgh signed Colquitt on Monday and he will be in uniform when the Steelers open at the New York Giants on Sept. 14. It was the highest-profile of a series of roster moves Pittsburgh made in hopes of chasing down defending AFC North champion Baltimore.

The Steelers also brought back Josh Dobbs and safety Sean Davis — both players originally drafted by Pittsburgh who struggled elsewhere — but they will likely serve in support roles. Not the 38-year-old Colquitt, who developed a reputation as one of the steadiest punters in the NFL while twice making the Pro Bowl for the Chiefs.

Pittsburgh will rely on that resolve as it begins a season unlike any other, one that will begin without fans in the stands, a variable that made Colquitt particularly attractive.

“He’s got a consistent resume over 15 years under a variety of circumstances,” coach Mike Tomlin said Tuesday. "That’s an asset to us.”

Tomlin repeatedly mentioned Colquitt's floor, hinting that Colquitt's consistency gave him an edge over Berry. Berry spent five years punting and serving as a holder for the Steelers and his 45.5 yards per kick average in 2019 was the second-best of his career. Berry beat out Corliss Waitman during training camp, but Colquitt impressed during a tryout and Berry found himself out of a job.

“We have a great deal of comfort in (Colquitt's) ability to deliver,” Tomlin said.

The Steelers have a similar level of comfort in both Dobbs and Davis, a comfort that comes from spending so much time with the organization. Pittsburgh selected Davis in the second round in 2016 and Dobbs in the fourth round in 2017. Davis left for Washington in free agency over the spring and Dobbs was traded to Jacksonville last September. Both were cut loose over the weekend and the Steelers raced in to bring them back to the fold.

While Dobbs will serve as the third-stringer behind Ben Roethlisberger and Mason Rudolph, Davis will likely see plenty of time on special teams while backing up safeties Terrell Edmunds and Minkah Fitzpatrick.

The Steelers made room on the roster for Dobbs by releasing Devlin “Duck” Hodges, who signed with the practice squad on Monday. Tomlin said the decision to keep four quarterbacks in the fold was a precaution because of the unusual nature of the 2020 season.

“In this COVID environment, you can't insulate yourself enough,” Tomlin said.

Pittsburgh is hopeful Pro Bowl left guard David DeCastro will be available to practice on Wednesday. DeCastro was limited during training camp because of an undisclosed lower-body injury. Tomlin is still weighing who will start next to DeCastro at right tackle. Both Chukwuma Okorafor and Zach Banner performed well during camp.

“It’s been a tough decision because I feel like we have two guys that are starter capable,” Tomlin said. “We’ll sort through that as we get through the week."