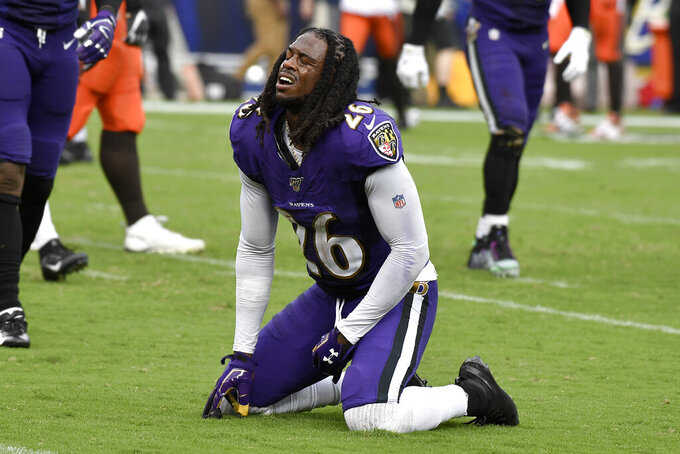 Baltimore Ravens cornerback Maurice Canady (26) reacts after failing to tackle Cleveland Browns running back Nick Chubb on a touchdown run during the second half of an NFL football game Sunday, Sept. 29, 2019, in Baltimore. (AP Photo/Brien Aho)

BALTIMORE (AP) — The Baltimore Ravens figured they really didn't have much to worry about after a narrow loss on the road against the unbeaten Kansas City Chiefs.

Their mood changed dramatically with a blowout defeat at home against a team they've dominated for well over a decade.

One week after absorbing their first defeat of the season, the Ravens played poorly offensively and defensively Sunday in a 40-25 rout by the Cleveland Browns.

Coach John Harbaugh didn't have to look at the tape to realize why Baltimore (2-2) fell into a tie with Cleveland (2-2) atop the AFC North ahead of winless Pittsburgh and Cincinnati.

Browns quarterback Baker Mayfield kept the Browns on the field on third down, tiring out a Ravens defense that has yielded more than 500 yards over successive weeks.

"When I broke down (the Chiefs game), I told the guys we had a brand to protect," defensive tackle Michael Pierce said. "For a lot of reasons, we did not do it."

In spite of it all, the Ravens still had a shot after Lamar Jackson threw an 8-yard touchdown pass to Mark Andrews to cut the deficit to 24-18 with 9:51 left.

An instant later, Nick Chubb burst through the left side of the Baltimore defense on an 88-yard run for a 12-point cushion.

That pretty much sealed defeat against a team the Ravens had beaten 30 of 40 times. Prior to this ambush, Baltimore was 10-1 against Cleveland at home since Harbaugh took over in 2008.

Mayfield threw for 342 yards, Jarvis Landry had eight receptions for 167 yards and Chubb rambled for 165 yards. But blame the Ravens for busted coverages, poor tackling and three turnovers — including a pair of interceptions by Jackson, ending his run of passes without a pick at 248.

"Mistakes are going to happen," Jackson said. "I've never seen a person play a perfect game. We just have to go out there, move on to the next play and do us."

For the most part, the Browns seemed to effectively shut down the Ravens passing attack, especially the deep balls that Jackson has become much more adept at throwing.

"They played sound defense," said rookie Miles Boykin, who made his second touchdown catch. "They tried to keep everything in front of them and limit their mistakes, and that's what they did."

About the only positive is that the defending AFC North champions are still looking good in a division that has experienced a dramatic dropoff — except perhaps for the Browns.

Next week, Baltimore takes to the road for a rivalry game against Pittsburgh.

"It's going to sting for a couple of hours. (Monday) we will be getting ready for the Steelers," wide receiver Willie Snead said.

Rookie Marquise Brown, Baltimore's most prominent deep threat, was held to four catches for 22 yards with a long of 10 yards.