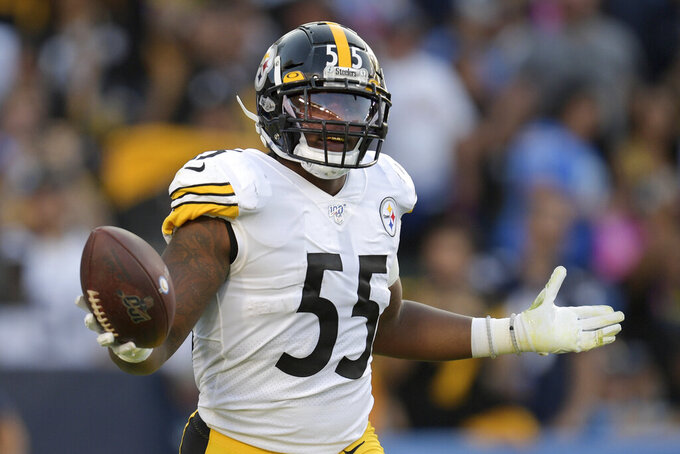 Asked why the winless Miami Dolphins (0-6) have taken steps toward competency after a horrific start heading into Monday night's visit to Pittsburgh (2-4) — their last two losses have come by a combined 11 points — the Steelers coach played it down the middle.

"They are a professional football outfit," Tomlin said.

One that is starting to look like one — at least just a little — on defense. So forgive Tomlin if he views Miami as something more than a mere speed bump for his own banged-up team, which has a very slim window to resurrect its season. Yes, the Dolphins are rebuilding under first-year coach Brian Flores. Yes, they haven't won a game in over 300 days. Yet there's a freedom amid the misery. With no expectations, Flores can experiment as he pleases. He can order a fake field goal or an onside kick, as he's done in each of the last two games, and if it doesn't work, so what?

Tomlin said that aggressive approach could be "troublesome" for an "inexperienced quarterback."

He's talking about Mason Rudolph, whose last appearance at Heinz Field ended when he slowly — very slowly — made his way to the sideline following a hit to the head by Baltimore's Earl Thomas that briefly left him unconscious. Given three weeks to recover, Rudolph said he's not concerned about any long-term effects of the harrowing collision that Thomas literally wiped from Rudolph's memory.

"I'm going to go play the game I've always played and play with the aggressiveness and if I need to extend the play, that's what's going to happen," Rudolph said. "I'm not going to think twice about worrying about getting hit in the right spot. That's just the luck of the draw."

Pittsburgh's path forward in 2019 without injured franchise cornerstone Ben Roethlisberger will rely heavily on how quickly the offense can create a distinctive identity behind Rudolph and whether the defense can continue its hot start even with defensive end Stephon Tuitt out for the season with a pectoral injury .

The Steelers are tied for second in the NFL in takeaways (15) and rank fifth in sacks (20). Yet they remain wary despite being 6-0 all-time against Fitzpatrick, who threw for 411 yards and three touchdowns against Pittsburgh last season while playing for Tampa Bay.

"We have everything to lose," Steelers safety Terrell Edmunds said. "We can't really worry about what they've got going on. We've just got to come in and play our game because we've got to win. That's just our whole mindset. We don't want to lose any more games. That's how we're approaching each week. Regardless of their team record, if they're coming in undefeated, if they come in here with all losses, we've still got to go out there and play our game."

The Dolphins' offensive line became a revolving door this year with personnel turnover that extended past the end of training camp. As coaches sort out their options and deal with injuries, Miami has had the same five starters for two games in a row only once.

But there are signs the group is beginning to mesh. Fitzpatrick wasn't sacked in last week's loss at Buffalo , and Miami topped 100 yards rushing for the first time.

"There's been so much improvement from Week 1 to now," Fitzpatrick said. "A lot of that is just working together, whether it's at practice or just sitting at a lunch table. I think we all know each other a little bit now. Everybody knows each other's names, and that's something we didn't have in the first few weeks."

The Steelers will be without backup outside linebacker Anthony Chickillo, who is on the commissioner's exempt list following his Oct. 20 arrest on misdemeanor charges stemming from an incident with his girlfriend at a resort during the team's bye week. Chickillo was a fixture in the linebacker rotation alongside Bud Dupree and T.J. Watt. Now it will be up to Ola Adeniyi and perhaps recently re-signed Jayrone Elliott to help pick up some of the slack.

"I think all of our guys that aren't front-line starters better have big-time versatility," Tomlin said. "Playing right or left should not be significant in terms of their ability to put their hand in the pile and aid us, particularly at the outside linebacker positions."

The Dolphins rank last in the NFL in passer rating, but their wideouts are a bright spot in the sputtering offense.

DeVante Parker has caught a touchdown pass in the past three games, the longest streak of his five-year career. Undrafted Preston Williams ranks second among all NFL rookies with 23 catches, which leads the Dolphins, and he also leads team with 314 yards receiving.

"I take pride in it, but it's nothing without wins," Williams said. "Winning is No. 1 on my list."