Rodgers leads Pack to top of NFC after draft disappointment 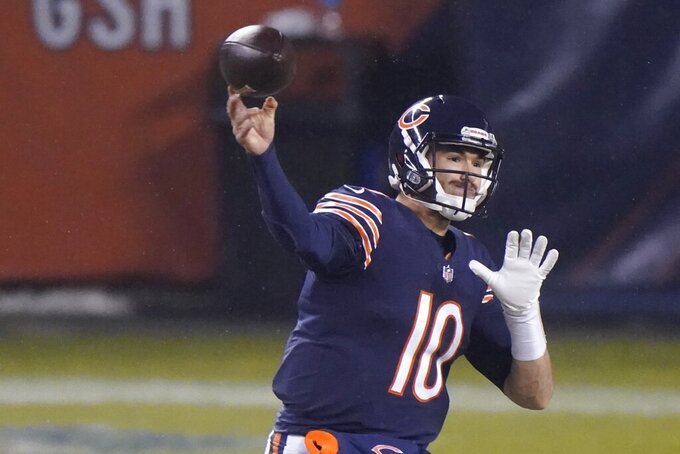 Chicago Bears' Mitchell Trubisky thorws a pass during the second half of an NFL football game against the Green Bay Packers Sunday, Jan. 3, 2021, in Chicago. (AP Photo/Nam Y. Huh)

The six-time Super Bowl champion left the Patriots for the Buccaneers last spring and led Tampa Bay to its first playoff berth since 2007.

The Bucs visit Washington in the wild-card round Saturday.

“It’s about one football game, who plays well, who executes when the pressure is on,” said Brady, who has an NFL-record 30 playoff wins but is just 4-4 with nine TDs and 10 interceptions in eight career playoff road games.

Rodgers led the league with 48 touchdown throws, including 18 to Davante Adams, and guided Green Bay (13-3) to the NFC’s top seed and its only first-round bye in the expanded playoff format that added a third wild-card team.

That puts Rodgers one win from finally playing a conference championship at Lambeau Field. He’s played four on the road, winning at Chicago on his way to bringing home the Lombardi Trophy following the 2010 season.

In addition to Tampa Bay-Washington, the Rams visit the Seahawks on Saturday after splitting in the regular season, and the Saints visit Chicago on Sunday.

HOPE: Packers are NFL’s top-scoring team at 31.8 points per game behind Rodgers, who threw just five interceptions to go with his 48 TDs, and Adams, whose 18 TD catches led the league even though he missed two games (hamstring). The defense boasts one of the game’s premier cornerbacks in Jaire Alexander, pass rusher in Za’Darius Smith, who has 26 sacks since 2019, and a solid safety duo of Adrian Amos and Darnell Savage.

DOPE: “It’s been a long time. There’s been a lot of ball between now and February 6, 2011, which was a beautiful day. It’s important to all of us. There are so many guys who haven’t been in that mix before. Only a few of us actually were there for that moment, so it would be nice for all of us to get back.”--Rodgers.

HOPE: Brees, who turns 42 on Jan. 15, threw for 4,967 yards and 34 TDs with 12 interceptions. RB Alvin Kamara led the league with 21 TDs (16 rushing, five receiving) and tied an NFL record by scoring six times in his last start in Week 16. Kamara also had a career-best 83 receptions, tops among the league’s running backs. The Saints also sport one of the top defenses with a front that’s stout against the run and a playmaking secondary that tied for first in the NFL with 18 interceptions.

NOPE: The Saints’ defense lost LB Kwon Alexander for the season with an Achilles tendon injury in Week 16. Will Brees be his vintage self in the playoffs? He’s played just three games since coming back from rib and lung injuries that sidelined up for more than a month and is now playing with a new type of protective vest. S Marcus Williams missed the last two games with an ankle injury and WR Tre’Quan Smith (ankle) is not eligible to return from IR for another week.

HOPE: The Seahawks have spent the last two months relying on their run game and returning to their defensive roots. Over their last eight games they’ve allowed an average of just 16 points and they’ve held their last five opponents under 20, an astounding feat considering the 2020 NFL season featured the most points (12,692) and touchdowns scored (1,473) in a single season in NFL history.

NOPE: Seattle’s high-flying offense was grounded over the last half of the season. Chunk plays haven’t been there as often, making it harder for Wilson to sustain drives. Third downs have been a season-long problem. Seattle proved in the first half of 2020 it can win shootouts if needed, but aside from a 40-point outburst against the Jets in early December, there’s been little that’s come easy for Seattle’s offense lately.

DOPE: “I’m thrilled about the fact that we’ve just continued to crescendo. We have continued to play solid football and keep the points down. I’m ready to play anybody, doesn’t matter who we play.”--coach Pete Carroll.

HOPE: The team with no name won the NFC East thanks to an improved defense led by No. 2 pick Chase Young and the stable control of veteran QB Alex Smith. The defense ranked second in the NFL overall and against the pass after several mediocre seasons and has the ability to take over games and torment opposing QBs. If Young, Montez Sweat, Jonathan Allen and Daron Payne can pull it all together on the defensive line, watch out for Ron Rivera’s bunch.

NOPE: Division champions under .500 have won playoff games before, but it’s hard to see Washington making a run unless everything goes right. Smith is dealing with a strained right calf in the same leg he broke two years ago, an injury that limits his movement. Rookie RB Antonio Gibson and second-year WR Terry McLaurin have also been banged up, which hinders a team with few other offensive weapons.

DOPE: “I’m not apologizing for getting in with a sub-500 record. At the end of the day, we won our division. It doesn’t matter how we did it, it’s a matter of getting into it. If people don’t think you have an opportunity and people don’t think you have a chance, well, great. It’s my job to make sure our players believe we have an opportunity and we have a chance.”--Rivera.

HOPE: No one has a more dazzling postseason resume than Brady, 43, who piled up enough rings for each hand with the Patriots, who fell to 7-9 without him. Over his last eight quarters, Brady threw for 1,067 yards with 10 TDs and one interception. That’s the most passing yards over an eight-quarter stretch in the last 30 years. He’s surrounded by an All-Star cast of playmakers: WRs Mike Evans, Chris Godwin and Antonio Brown, RBs Ronald Jones and Leonard Fournette, and TEs Rob Gronkowski and Cameron Brate. And Brady’s 40 TD passes were second only to Rodgers’ 48.

NOPE: The Bucs are 10-0 this season against opponents that didn’t make the playoffs, 1-5 against teams that did. They begin their first postseason appearance in 13 years without LB Devin White, who’s on the reserve/COVID-19 list. He’s the team’s leading tackler and ranks second with nine sacks. The Bucs have struggled against opponents who are able to pressure Brady, and Washington’s pass rush led by Young is among the NFL’s best.

DOPE: “It doesn’t matter what a team’s record is, it doesn’t matter how they got here. They’re here, so they’re going to give you their best and we should put our best out there.”--LB Lavonte David, making his playoff debut after nine seasons.

HOPE: The Rams’ defense is the best in the NFL by nearly every significant measure, with Aaron Donald and Jalen Ramsey leading a deep, versatile group under wunderkind coordinator Brandon Staley. The defense has kept Los Angeles in essentially every game despite the Rams’ six losses, and the unit is easily capable of dominating any opponent that isn’t clicking.

NOPE: Los Angeles’ offense has been mediocre all season, with coach Sean McVay failing to get the group back to the levels it reached in his first two playoff seasons. QB Jared Goff has an injured thumb and has been frequently ineffective even when healthy. Even if backup QB John Wolford plays, he won’t fix the Rams’ balky running game or middling pass protection, neither of which shows any signs of improvement.

DOPE: “I think our defense has consistently performed really well throughout the year. In spite of some of the things that have gone on with the offense, that’s not going to be an excuse for us not to be ready to go. The guys are going to be asked to step up, and I feel like they’re more than capable.”--McVay.

HOPE: Chicago will be hard-pressed to beat Brees and the Saints, let alone make a deep run. Then again, the Bears are resilient. They bounced back from a six-game losing streak to win three in a row before bowing to Green Bay in the regular-season finale. Their defense ranked among the top 10 for most of the year. And with 102 receptions for 1,250 yards, WR Allen Robinson is having one of his best seasons.

NOPE: The Bears could be missing several important players, including OLB Roquan Smith. The Bears’ leading tackler left in the first quarter of the Green Bay game with an elbow injury. Rookie Darnell Mooney, the Bears’ second-leading receiver, exited in the fourth quarter with an ankle injury after setting career highs with 11 catches for 93 yards. DBs Buster Skrine, rookie Jaylon Johnson and Deon Bush missed the loss to Green Bay.

DOPE: “So you lose six in a row, you still make the playoffs, and that’s not easy — 8-8. No it’s not perfect. We understand that. It’s not perfect. We have a lot of things to get better at, but we can’t worry about that. Now what we need to do is worry about everything we can to be the best team that we can on Sunday against the Saints."--coach Matt Nagy.