Sacking QBs has always been passion for Bengals' Hendrickson 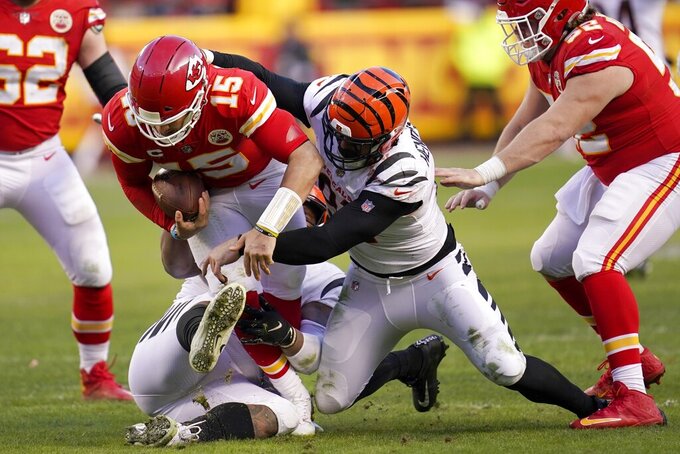 Trey Hendrickson was once a touchdown-catching tight end in high school, a big-bodied target who was tough to take down.

You see, pass rushing is a passion for the Cincinnati Bengals defensive end. And opposing offenses are the unfortunate recipients of his game-wrecking fervor.

“I did love playing tight end, but there's nothing like sacking the quarterback," Hendrickson said. "Everybody will say touchdowns are the greatest thing. But I've scored touchdowns and I've sacked quarterbacks.

"There's nothing close to a sack.”

Hendrickson would certainly know. His 27 1/2 sacks over the last two regular seasons rank him third in the NFL in that stretch, behind only Pittsburgh's T.J. Watt (37 1/2) and Cleveland's Myles Garrett (28). That includes 14 for Hendrickson this season, his first in Cincinnati after four in New Orleans.

“In the secondary, we always joke about how Trey needs to let us get some interceptions,” safety Jessie Bates III said with a laugh. “He was on a hot streak. I think he had like 10 games straight with a sack, so I know how much this means to Trey. He’s a hell of a player and an even better person.”

Bates was close: Hendrickson actually had nine straight games with a sack. But if you count half-sacks, he was in on taking down the quarterback in 11 consecutive games.

“The first thing you have to mention when you talk about Trey is his intensity,” Bengals defensive line coach Marion Hobby said. “He’s an intense football player. He’s intense in the meeting rooms and he’s intense on the field. And on game day, he tries to take it up to another level.”

In the 16 regular-season games he played, Hendrickson was shut out just three times. He has 2 1/2 sacks in three playoff games, including 1 1/2 at Kansas City in the AFC championship.

“I think the goal every game you go into is to affect the quarterback, whatever team you’re playing for,” Hendrickson said. “Quarterbacks win games. If you can take that piece of the puzzle away, I think it’s a lot easier to control a game on defense and make sure that things are going in the proper direction.”

In other words, dominating on defense and making things miserable for offenses. And winning games.

Hendrickson has helped the Bengals do all that since signing a four-year, $60 million deal last March following a breakout season in New Orleans, where he had 13 1/2 sacks. That came after he had 6 1/2 in his first three NFL seasons.

“He’s been a tremendous pass rusher his whole career, and especially this season for us,” linebacker Logan Wilson said. “I’m thankful our front office and coaching staff went out and signed him."

And Hendrickson's impact has been felt far beyond his sacks. Bates noted how defensive end Sam Hubbard had just two sacks last season, but had 7 1/2 in 2021 and three more so far in the playoffs. There's also this: The Bengals had just 17 sacks in 2020, fewest in the NFL. They had 42 this season, ranking in the top half of the league.

“It’s not all about what Trey (himself) has done for us,” Bates said. “He helps out other guys around the defense.”

Hendrickson has always shown an ability to make plays on the football field, making it look easy at times.

Growing up in central Florida, Hendrickson was a terrific athlete who also played lacrosse. His 6-foot-4, 215-pound frame in high school made him an ideal defensive end at Apopka High School. That's where the love for dumping quarterbacks began.

In three years, Hendrickson established himself as a top college prospect on defense, first as a linebacker and then as a defensive end, and drew the attention of several Division I programs. Then came some troubles before his senior year. Hendrickson was briefly booted from the football team because of his attitude, according to a Cincinnati Enquirer report.

When Hendrickson came back, he was asked to move to tight end because of injuries at the position. He embraced the move — and had seven touchdown catches that season.

“There’s been a lot of places where as a young man, you have challenges and things like that, and I think it was good to have some adversity early,” Hendrickson recalled Monday during the Bengals' Zoom sessions. “Just to really appreciate the game of football, continue to work toward being a better teammate and a better player to inevitably go on to win a state championship.”

Hendrickson moved back to defensive end in college at Florida Atlantic, where he developed into an NFL prospect in his four years. He was selected the top defensive player of the East-West Shrine Game in 2017, with his strip-sack a highlight.

New Orleans drafted him in the third round that year. He showed promise, culminating in his big breakout a year ago.

And now he's a force on a sack-happy defense looking to cap the season with a Super Bowl victory over the Los Angeles Rams.

“I can’t say enough about guys that have done it before me and continue to get after the passer consistently,” Hendrickson said. “It’s a hard thing to do, but it’s a great fight. So I look forward to getting after the quarterback on Sunday and taking care of our job.”