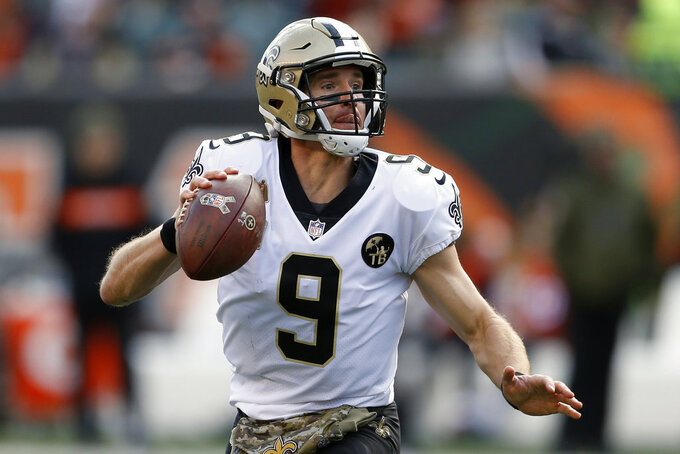 FILE - In this Nov. 11, 2018, file photo, New Orleans Saints quarterback Drew Brees looks to pass in the second half of an NFL football game against the Cincinnati Bengals, in Cincinnati. Brees completed an NFL single-season record 74.4 percent of his passes during the just-completed regular season, surpassing his own previous NFL record of 72 percent last season. Brees has completed 67.3 percent of his passes during his 18-year pro career, also the highest such mark in NFL history.(AP Photo/Gary Landers, File)

METAIRIE, La. (AP) — It's one thing to throw passes as accurately as any quarterback ever has, which the New Orleans Saints' Drew Brees arguably does.

His pinpoint control was even documented in a "Sport Science" episode in which Brees' ability to hit a target compared favorably to that of an Olympic archer.

Yet Brees attributes his record career and single-season completion percentages to far more than his ability to throw passes wherever he wants. And he is also quick to stress that he can't do it alone.

"We work at it. It takes an entire group and it starts with the guys up front, goes to the receivers catching the ball, tight ends, backs, everybody in protection and running routes and timing," Brees said. "I mean, there is so much that goes into that."

Brees takes time during or after virtually every practice or even offseason workout to help receivers and blockers see the field the way he sees it, to help them understand how he's inclined to act when the approach of a defense causes plays to develop any variety of ways.

During the course of 18 full regular seasons, Brees, who turns 40 on Jan. 15 and has one year remaining on his contract, has set an entirely new NFL standard for completion percentage. His 74.4 percent completion rate (364 of 489) this season broke the NFL record of 72 percent that Brees himself set last season. Brees owns three of the six highest single-season completion rates in NFL history. His 70.6 rate in 2009, when the Saints won the Super Bowl, tied Kenny Anderson for the highest of all time. He owned the record alone after completing 71.2 percent in 2011. That stood until Sam Bradford's 71.6 percent in 2016, which Brees broke the very next year.

Brees' career completion rate of 67.3 percent also is highest of all-time. And he leads in passing yards and number of completions.

Saints coach Sean Payton, who played quarterback in college and very briefly as a pro, and whose entire 30-year coaching career at the college and pro levels has involved working with offenses, attests to the rarity of what Brees has accomplished by completing nearly three-quarters of his passes this season.

"Honestly, it's a high mark. I can't recall being with a quarterback or an offense where (a QB) is completing balls at that high number," Payton said. "It's exceptional and I don't think you take it for granted. That efficiency is impressive."

Brees is a stickler for throwing mechanics. He has trained for years with throwing coach Tom House, a former major league pitcher. And the ex-Purdue star sounds like an engineer when he explains the "kinetic chain," which, in his case, refers to the transfer of energy from his feet to his hips, shoulders and ultimately the index finger in his throwing hand as he unloads the ball. He drops terms like "ankle eye," referring to an imaginary eye on the inside ankle of a passer's back foot, which should be looking straight at the intended target.

"His accuracy is exceptional," Payton said. "Then the methodical approach, the amount of time he puts into the situations, those things factor in."

Tight end Ben Watson, whose 15-year NFL career included several seasons with New England's Tom Brady, said Brees spends as much or more time explaining what he's thinking, seeing and needing on a given play than any QB or offensive coordinator he's known. Brees goes into fine detail with receivers about route depth, timing and leverage. He reminds offensive linemen that when he's taking just a three-step drop blocks need to be aggressive so that defensive lineman will be forced to engage with their hands, preventing them from getting their arms up to bat down the ball.

Sometimes, Brees can sound defensive when discussion turns to his completion rate, as if he's sensitive to the notion it's only so high because he often throws short, particularly to running backs. Brees tends to harken back to advice from his second NFL head coach, Marty Schottenheimer, who'd extol the virtue of modest completions by saying one never goes broke taking a profit.

"I know this: completions usually equal positive plays. Positive plays move the chains, moving the chains scores points, scoring points wins games," Brees said. "So you just focus on getting the ball in the hands of your playmakers as early and often as possible. Good things happen. But we work on that. That's not easy."

Added Watson, "The No. 1 thing about having a high completion rate is getting to a play that has a high chance of being a completion."

"A lot of our plays have options," Watson continued, citing different versions of a given passing play for zone or man-to-man coverage, as well of the option to check out of a play and call an entirely new one because of defensive alignments.

So Brees' sophisticated understanding of opposing defenses "is just as important as his accuracy or a guy catching the ball," Watson concluded.

Saints veteran receiver Ted Ginn played in Carolina when Cam Newton was the NFL's Most Valuable player in 2015. Ginn said Brees was MVP-worthy this season — and not just for his completion percentage record or the fact that the Saints went 13-2 in Brees' 15 starts.

"He's one of the smartest human beings that I know on and off the field," Ginn said. "You can understand why him and Sean have been together for a long time."

And Ginn added that Brees' affability, leadership and ability to communicate play a part, too.

"The guy is amazing and he does a lot of things that a lot of people wouldn't even know," Ginn said. "He's really like a father figure out there to a lot of our guys that's on that field. We really believe in that guy — and that guy really believes in us."