Seahawks can't make up for an imperfect Russell Wilson 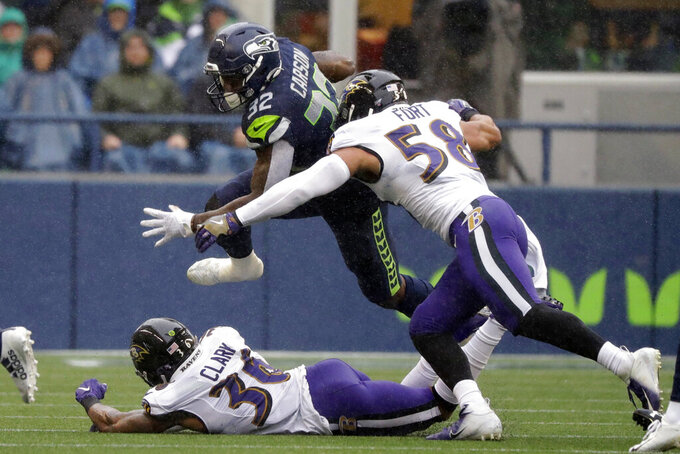 RENTON, Wash. (AP) — Russell Wilson was never going to be perfect all the time. But in making his first major miscue of the season, Wilson showed the tiny margin the Seattle Seahawks have for absorbing mistakes.

If Wilson isn't right on point or Seattle's defense isn't forcing turnovers and causing chaos for the opposition, the Seahawks will end up with performances like Sunday in a 30-16 loss to Baltimore.

Wilson threw his first interception of the season and it was a doozy, watching Marcus Peters return the pick 67 yards for a touchdown. It was the first of the Ravens' two defensive scores, which would be challenging for any team to overcome. But combine those two turnovers with Lamar Jackson running around and through the Seahawks defense, and it was a perfect formula for Seattle's second home loss.

Wilson had been nearly flawless for the first six weeks, inserting himself into the early MVP conversation. Despite Wilson's high level of play, Seattle had a pair of one-point wins, a two-point victory and a four-point win. Even when Wilson was great, the Seahawks were still squeaking by.

Sunday, he was not at his best. Aside from the interception, Wilson completed only 48.7% of his passes. The complementary pieces Wilson needed were absent as well. Seattle rushed for only 36 yards in the second half and the Seahawks' defense failed to force a turnover while watching Jackson rush for 116 yards and be the best player on the field.

"It hammered home one of the lessons of our program that it's all about the ball," Seattle coach Pete Carroll said. "We know. We're on it so diligently that when you give the ball up a couple of times, it's hard to win. You give up a couple of scores, it's really difficult."

The connection between Wilson and WR Tyler Lockett remains highly productive. Lockett had five receptions Sunday, but most impressive was two plays where Wilson trusted Lockett would get to the ball first. One went for an 8-yard TD . The other came as Wilson was facing a blitz and lofted a deep pass down the middle. Lockett ran under it for a 33-yard gain.

Carroll's decision making has always seemed a little emotional, but he made two critical decisions on Sunday that proved costly. He continued to test the ability to challenge pass interference at times where it seemed obvious there would be no change to the original call. His decision to do so in the first half ended up costing Seattle a timeout it could have used on the final drive of the half.

His second questionable choice was attempting a 53-yard field goal on a stormy day in the third quarter in a 13-all game. Seattle faced fourth-and-3 at the Baltimore 35. Carroll showed trust in kicker Jason Myers by sending out the field goal unit. Myers missed wide right and given a short field, Baltimore scored late in the quarter — on a fourth-and-2 no less — to take the lead for good.

The debate was between Myers attempting the kick or punting. Carroll said going for it with the offense was never the right choice in his mind.

"It's a little longer than you want to go for it," Carroll said.

Rookie second-round pick Marquise Blair not only started Sunday at safety, but played well. Blair was one of four players to be in for all 59 defensive snaps for the Seahawks. He finished with six tackles and had no major, obvious assignment errors. Carroll said Blair will be getting more playing time.

Fellow rookie DK Metcalf made the kind of mistake that can't happen in the fourth quarter. Metcalf simply dropped the ball trying to switch hands after making a short reception and the fumble was returned for a touchdown by the Ravens. It was the final blow in a day when Metcalf had four catches for 53 yards but was targeted nine times and struggled to get away from physical coverage by the Ravens in the second half.

Carroll said LT Duane Brown (biceps) wants to practices this week, but "we may have to protect him from himself." Brown has missed the last two games. The Seahawks are hopeful D.J. Fluker (hamstring) will be ready to play against Atlanta after sitting out the past two. Fluker was active Sunday, but did not play with Jamarco Jones filling in again at right guard.

Safety is another area of concern as Lano Hill (elbow) is not expected back this week and Bradley McDougald missed Sunday's loss with back spasms.

The availability of defensive end Ziggy Ansah is also in question from an ankle injury suffered against Cleveland and kept him out of the loss to Baltimore.

The Seahawks make another East Coast road trip to take on Atlanta. The Seahawks are just 2-5 against the Falcons during Carroll's tenure, including a pair of playoff losses in Atlanta.