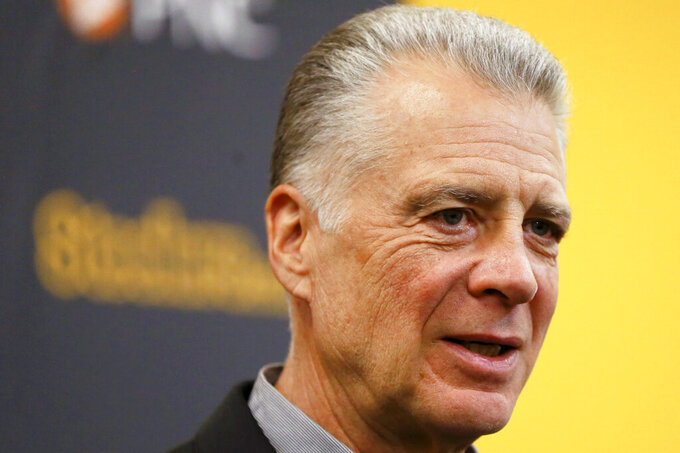 Time, however, appears to be running out.

Steelers president Art Rooney II said Wednesday the team still hasn't heard from Brown since he left Heinz Field following a victory over Cincinnati in the regular-season finale on Dec. 30. Brown did not play after failing to communicate with Pittsburgh coach Mike Tomlin in the 48 hours leading up to the game to provide an update on an apparent knee injury.

Brown didn't show up when the Steelers cleaned out their lockers on New Year's Eve after finishing 9-6-1 and has made repeated overtures on social media over the past few weeks to indicate he'd prefer to play elsewhere in 2019.

Rooney said the team has "left everything open" in terms of Brown's future, including a potential reconciliation but added "there aren't that many signs out there that that is going to happen."

Brown, the only player in NFL history with six consecutive seasons of at least 100 receptions, has three years remaining on his current contract. Though the team has been unable to make contact with him, the 30-year-old has been staying busy by posting video from workouts on Instagram and interacting with fans and former teammates on Twitter .

Rooney indicated he would like to have the chance to get Brown's side of the story, but stressed he would not "disparage" the player who evolved from a sixth-round pick into one of the best players of his generation. Rooney brushed off the notion the Steelers have become a "circus," calling it "nonsense" and didn't believe Brown's sometimes erratic behavior was an issue until recently.

"Were there things that maybe we would have liked to do differently or liked him to have done differently?" Rooney said. "The answer to that is probably yes. But he's one of the hardest working players on the team, contributed to a lot of wins. I think someday we'll probably understand better what happened here the last week of the season but don't really understand it right now."

Brown's status is the biggest offseason question facing Pittsburgh, but not the only one. The team could still — at least in theory — try to re-sign running back Le'Veon Bell, though that seems unlikely after Bell opted to sit out all of 2018 rather than agree to his $14.4 million franchise tender. Rooney shook his head when asked if the team should have approached negotiations with Bell differently last spring.

"If you know a guy is going to hold out a whole season, how would you know that?" Rooney said. "How often does that happen in the history of the National Football League? To sit there and say you should have known, I don't know. I didn't expect it. I didn't expect it so I'm guilty of not expecting that to happen, what can I say?"

James Conner and Jaylen Samuels were productive in place of Bell, though that didn't stop Pittsburgh from letting running backs coach James Saxon walk after his contract expired, a move the team made because Tomlin felt it was "time for a change," according to Rooney.

The team also opted not to retain outside linebackers coach Joey Porter and offensive line coach Mike Munchak left for the same position in Denver to be closer to his family.

Rooney does not anticipate any additional departures, meaning defensive coordinator Keith Butler — whose unit produced an NFL-high 52 sacks but also let second-half leads slip away four times over the final six weeks — will stay on. Rooney stressed blame for Pittsburgh's 2-4 slide down the stretch is widespread.

"I have to say that when you miss the playoffs nobody gets absolved, coaches, players, scouts, front office, so I think everybody knows we need to be better, including Mike," Rooney said. "And there's no disagreements in the organization about that. We all need to do better."

Rooney called the swoon "tough to swallow" and pointed specifically to kicker Chris Boswell's struggles (he made just 13 of 20 field goals after reaching the Pro Bowl in 2017) and a defense that produced just 15 turnovers, tied for third-fewest in the league.

"We just have to be more aggressive at taking the ball away and finding players that can do that," Rooney said. "So I think that it is something that you can improve on and we need to do that."

The team would like to sign quarterback Ben Roethlisberger to a new deal. Roethlisberger turns 37 in March, but is coming off a season when he led the league in passing yards.

"Good news is that you look around the league and quarterbacks are playing at a high level into their 40s," Rooney said. "Wouldn't have expected that years ago. I feel good about where Ben is physically, mentally, his ability to be a productive player for multiple years."

Pittsburgh could also put together a new contract for Tomlin, whose current deal runs through 2020, though that will likely be tabled until later in the offseason.

The Steelers plan to find a spot on the roster for injured linebacker Ryan Shazier, who is recovering from a spinal injury suffered in December 2017. There appears to be no plans to renege on the decision to exercise the fifth-year option on outside linebacker Bud Dupree, who is scheduled to make $9.2 million in 2019. Rooney said he wouldn't "predict anything" in regards to Dupree's contract, but added "I think there was progress there this year and we're looking for progress from him next year."