Strong field of DBs and OLs for Hall of Fame election 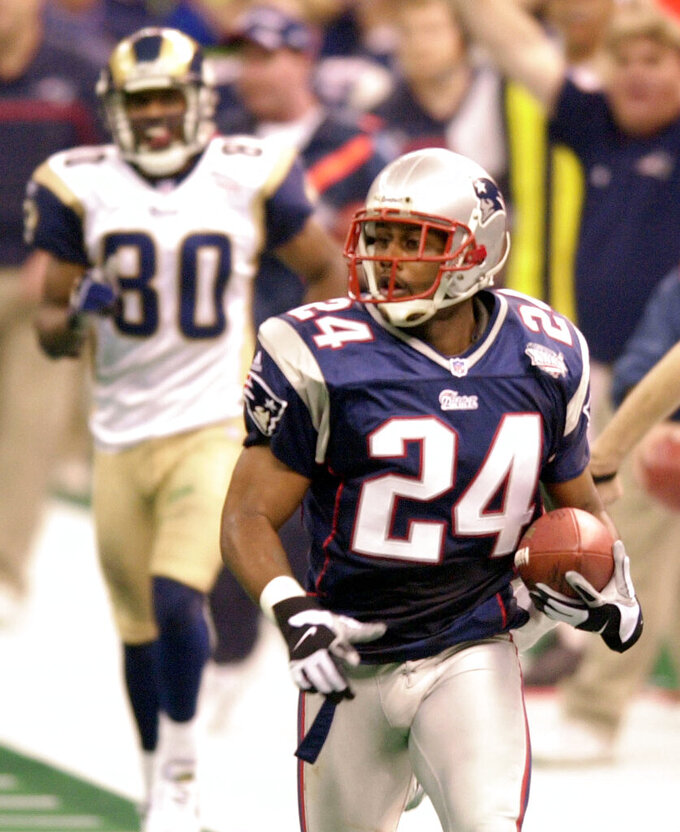 FILE - In this Feb. 3, 2002, file photo, New England Patriots cornerback Ty Law (24) is trailed by St. Louis Rams' Isaac Bruce (80) as he scores a touchdown during the second quarter of NFL football's Super Bowl XXXVI at the Louisiana Superdome in New Orleans. In the last decade, four defensive backs from the modern era have made the Pro Football Hall of Fame. On Saturday, five of them are up for consideration. Cornerback Champ Bailey and safety Ed Reed are in their first year of eligibility. Cornerback Ty Law and safeties John Lynch and Steve Atwater each have been this route before and fallen short. (AP Photo/Tony Gutierrez, File)

ATLANTA (AP) — In the past decade, four defensive backs from the modern era have made the Pro Football Hall of Fame.

On Saturday, five of them are up for consideration.

Cornerback Champ Bailey and safety Ed Reed are in their first year of eligibility. Cornerback Ty Law and safeties John Lynch and Steve Atwater each have been this route before and fallen short.

There are 26 defensive backs in the Canton shrine, not a particularly high number; 26 quarterbacks are in the hall, and only one of them is on the field at a time — OK, the Saints sometimes go with two. Most defenses have at least four DBs out there at a time, and more often these days there are five or six.

So the relative shortage of coverage guys and bone-shattering tacklers from the secondary could get addressed this year.

"Man, just a playmaker," Ravens general manager Eric DeCosta says of Reed, who was a five-time All-Pro, won a Super Bowl for the 2012 season, made the All-Decade team of the 2000s, and was the 2004 Defensive Player of the Year.

"Ed just always had a great knack for making a critical play in a critical situation. He was a finisher. He was a guy that when the lights were on, he was going to make the play."

DeCosta recalls a game against Washington:

"I'll never forget that night game when he blocked the punt, recovered the fumble and basically, singlehandedly, won that game for us. He just had a flare for making the best play of the game."

Reed's fellow newcomer to the process, Bailey, starred for the Redskins for five seasons, then for another 10 with Denver. A three-time All-Pro who also made the 2000s All-Decade squad, he had 52 interceptions and was a lockdown cornerback for most of his career. Bailey also played some offense and returned punts.

"I just loved to play. That's why I did so much," he says. "I love to do it, it wasn't because I was good at it. A lot of guys are good at it, but they hate putting in the work. That's what I love to do.

"When I went to college, it was the same thing. When I got to NFL, I wanted to do everything. I did as much as I could, as long as I could, and as long as they allowed me. Then once I got a little older, I got a little smarter and realized that I shouldn't be doing all of this stuff. But it's football and I miss the game."

Lynch was the bulwark of the Tampa 2 defense for the Buccaneers and then the Broncos, winning a Super Bowl with Tampa Bay. Law also won rings, getting three with New England, and had 53 interceptions. Atwater, as fierce a hitter as the safety position has seen, won two Super Bowls with the Broncos.

There is a definite Denver flavor to this year's class, with team owner Pat Bowlen on the ballot as a contributor. The other contributors' category nominee is long-time Cowboys and league executive Gil Brandt, and the senior candidate is former Chiefs safety Johnny Robinson. They are considered separately from the modern-era guys.

Along with DB, the offensive line is loaded with contenders, featuring center Kevin Mawae, tackles Steve Hutchinson and Tony Boselli, and guard Alan Faneca. All have been finalists before. Mawae, Faneca and Hutchinson also made the All-Decade team of the 2000s, Boselli was voted to the 1990s squad.

The other first-year eligible player in the mix is Tony Gonzalez, who holds most of the NFL's career records for tight ends.

A maximum of five modern-era candidates can make it, and a maximum of eight overall.

Inductions will be on Aug. 3.