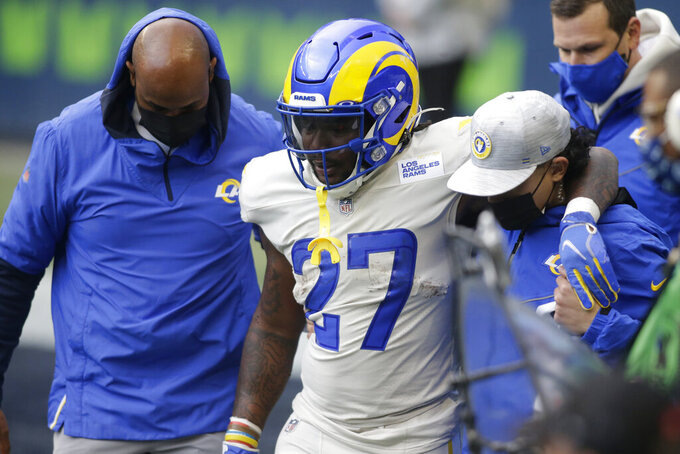 Los Angeles Rams running back Darrell Henderson Jr. (27) leaves the field with an injury during the second half of an NFL football game against the Seattle Seahawks, Sunday, Dec. 27, 2020, in Seattle. (AP Photo/Scott Eklund)

LOS ANGELES (AP) — The Los Angeles Rams' sputtering offense is the biggest culprit in their slide from the top of the NFC West to the brink of missing the playoffs.

In fact, the unit is so ineffective that it's unclear whether the injury absence of its starting quarterback and its leading rusher will hurt or help the Rams in their regular-season finale.

Jared Goff and Darrell Henderson will both miss the Rams' crucial game against Arizona on Sunday. Los Angeles (9-6), which led the division before its first two-game skid of the season, will miss the playoffs if it loses to the Cardinals and Chicago beats Green Bay.

Goff injured his thumb in the Rams' 20-9 loss at Seattle last Sunday, while Henderson is headed to injured reserve with a high ankle sprain. Goff had surgery Monday, which means backup John Wolford will make his NFL debut against the Cardinals.

Los Angeles already was without its second-leading rusher, rookie Cam Akers, who sprained his ankle a week earlier.

But the injuries don't cover the depth and breadth of everything going wrong with coach Sean McVay's offense, which couldn't score a touchdown despite gaining 334 yards against the Seahawks.

The Rams are seventh in the NFL with just under 380 yards per game, yet they’re 17th in the league with only 23.6 points per game. LA has moved the ball well occasionally in December, but with nothing like the flair and consistency of a Super Bowl contender, let alone the Rams' dominant units from 2017 and 2018.

“We've had opportunities the last two weeks to punch our ticket to the playoffs, and unfortunately we haven't played well enough to do that,” center Austin Blythe said Monday. “Luckily we put ourselves in a position early in the year where these games matter, and we still control our own fate. We're going to be working hard this week.”

The Rams' defense is still solid after holding Seattle to 292 yards and 14 fewer plays than LA. The group is No. 1 in the league in yards allowed (286.5) and third in points (19.3). It wasn't totally dominant against the Seahawks, who had two second-half TD drives. Sebastian Joseph-Day also lamented its inability to force a turnover, but McVay couldn't realistically ask for much more than coordinator Brandon Staley's group is giving.

Explosive plays. The offense averaged only 4.5 yards per snap, and it didn't have an offensive play longer than one 26-yard catch by Josh Reynolds. McVay and Goff rarely throw the ball deep, and they're rarely successful when they do. Without Akers' breakaway speed in the backfield, Los Angeles has little capacity for game-changing plays.

LB Leonard Floyd. The veteran who joined the Rams on a one-year contract sacked Russell Wilson twice to give himself 9 1/2 sacks this season, eighth in the NFL. He's fully capitalizing on the chance to play next to Aaron Donald, and the reward is likely a big payday next spring.

Goff, the NFL's leader in turnovers since 2019, gave away the ball only once against Seattle, but it was an atrocious interception that he called “really dumb.” Otherwise, Goff and his receivers were unable to do much against the NFL’s worst pass defense, managing just 216 net yards passing despite several big catches by Cooper Kupp and Robert Woods. Goff’s offensive line also wasn’t dominant against the Seahawks’ normally unimpressive pass rush, allowing three sacks and 10 quarterback hurries. It's extremely unclear whether Wolford will be able to change anything.

Goff will miss a game due to injury for the first time in his five-year NFL career. Henderson will miss his first game this season. The Rams also will open the 21-day window for the return of left tackle Andrew Whitworth, who hopes to play if the Rams make the playoffs.

0 — The number of NFL snaps taken by Wolford. He excelled in the AAF in 2019 after leaving Wake Forest in 2017, but the fleet-footed, 6-foot-1 passer hasn't received any playing time from McVay in two years, even late in a handful of comfortable wins this season.

Beating the Cardinals for the eighth consecutive time in McVay's four seasons to reverse this late-season slide. Going into the playoffs on a three-game skid seems like a recipe for first-round failure.

By Julie Watson 7 minutes ago
By Stephen Whyno 2 hrs ago
By Dennis Waszak Jr. 17 hrs ago
By Tom Withers 18 hrs ago
By Kristie Rieken 22 hrs ago