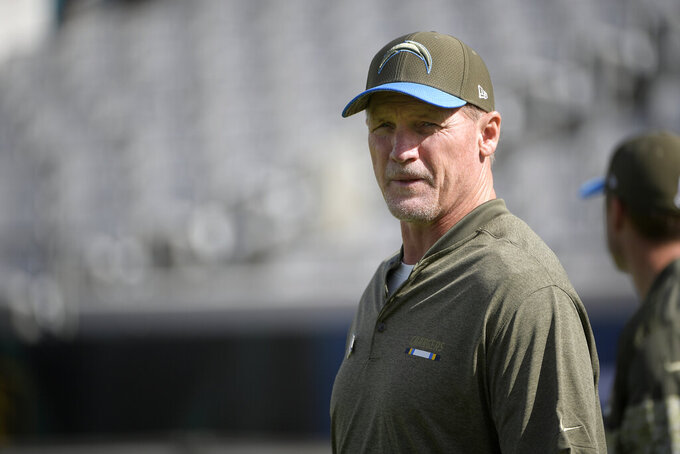 FILE - In this Nov. 12, 2017, file photo, Los Angeles Chargers offensive coordinator Ken Whisenhunt watches warmups before an NFL football game against the Jacksonville Jaguars in Jacksonville, Fla. Whisenhunt has been relieved of his duties as the Chargers offensive coordinator. The team announced the move Monday, Oct. 28, 2019, a day after they defeated the Chicago Bears. (AP Photo/Phelan M. Ebenhack, File)

COSTA MESA, Calif. (AP) — The Los Angeles Chargers fired offensive coordinator Ken Whisenhunt on Monday night, shaking up the coaching staff after a disappointing first half of the season.

Coach Anthony Lynn said in a statement that it was not an easy decision to let go of Whisenhunt, but that he felt a change was necessary. Lynn did not name an interim coordinator, but he did run Buffalo's offense during most of the 2016 season before coming to Los Angeles in 2017. The Chargers' next game is against Green Bay on Sunday.

Considered by some to be a Super Bowl contender before the season, the Chargers are 3-5. They needed a missed 41-yard field goal as time expired to beat Chicago 17-16 on Sunday and snap a three-game skid.

Lynn said as recently as two weeks ago that there weren't any disagreements during games between him and his assistants.

"Every plan — offense, defense and special teams — crosses my desk before it goes to those players. If there was a disagreement, it would be handled right then and there, not on Sunday," he said.

Los Angeles is ranked 17th in the league in total offense and 28th in rushing. The Chargers have gained less than 40 yards on the ground in four straight games. According to Pro Football Reference, they are the first team since the 1946 Detroit Lions to accomplish that dubious feat.

The running game has been ineffective despite the return of Melvin Gordon, who missed two months while holding out. The two-time Pro Bowler is averaging 2.6 yards per carry and has only one run over 10 yards in four games. He also had a fumble at the goal line on a potential game-winning touchdown on the final drive of a 23-20 loss to Tennessee on Oct. 20.

Philip Rivers is tied for sixth in the league in interceptions with seven after throwing 12 last season.

The Chargers have also been plagued by problems in the red zone. They have five turnovers in goal-to-go situations, including three at the 1-yard line. And they've had six touchdowns nullified because of penalties or replay reversals, including two on the final drive against Tennessee.

Lynn also has not been happy with his team's slow starts. The Chargers have been outscored by 28 points in the first quarter in their last four games and have committed four turnovers. Both are second-worst in the league in October.

Whisenhunt had been the Chargers' offensive coordinator since 2016, their last season in San Diego. He had the same role with the Chargers in 2013 before leaving to spend two seasons as head coach of the Tennessee Titans. He's also been a head coach with Arizona. He was a candidate to be the head coach at Georgia Tech last year before removing his name from consideration at his alma mater.