Cam Newton confident he can recover from dismal outing 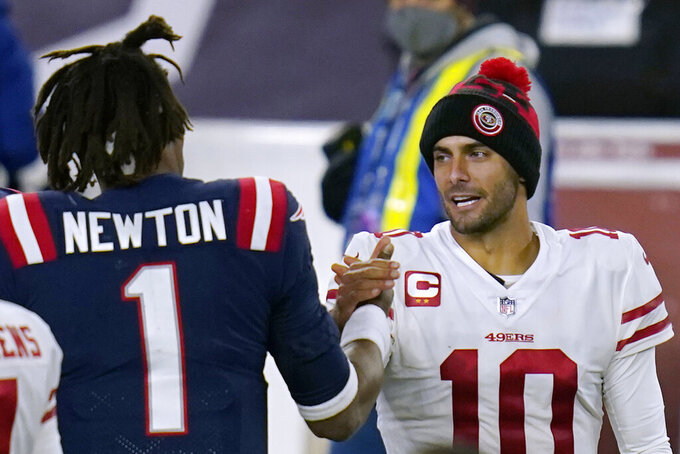 FOXBOROUGH, Mass. (AP) — In the days leading up to the Patriots' matchup with the 49ers, Cam Newton said he felt like he hadn't played up to the expectations he set for himself prior to this season.

That standard took another beating during Sunday's 33-6 loss to the 49ers.

Newton played his worst game of 2020, completing 9 of 15 passes for a season-low 98 yards and three interceptions before being replaced by Jarrett Stidham in the fourth quarter. Stidham was 6 of 10 for 64 yards and an interception.

Newton's 39.7 quarterback rating was his lowest of the season. In his two games since returning from reserve/COVID-19 list, he is 26 of 40 for 255 yards, no touchdowns and five picks. The Patriots are 0-2 in those games.

“I can’t speak for everybody. I just stick to the man in the mirror and I wasn’t good enough. ... In no way shape or form did I put this team in a position to compete, and that’s inexcusable,” Newton said.

"This is the National Football League where a lot is put on the quarterback, and I have to deliver and I haven’t done that. Quite frankly, it’s evident.

“So here moving forward I know what the issue is, like I just said, and I just have to be better.”

The 27-point loss was New England's largest at home under coach Bill Belichick, according to Elias Sports Bureau. The Patriots had gone 286 games without a three-game losing streak, the longest span between three-game slides in NFL history.

It's left the Patriots with a three-game skid and at 2-4 for the first time since Belichick’s first season in 2000, when the Patriots went 5-11.

Belichick said corrections need to be made across the board.

“I think we need to do better job in all areas. I don’t think there’s anything you could say that we don’t need work on,” Belichick said. “Obviously we weren’t good on third down on either side of the ball. We weren’t good in the red area. The opportunities that we had we didn’t, weren’t able to capitalize on. We turned the ball over. One takeaway, basically. So we just, just need to be better everywhere.”

Newton was out of sync from the start of the Patriots' first drive, making poor reads, and mistimed throws to receivers.

Trailing 10-3, he made a bad play worse when he tried to dump off the ball on the run to receiver Jakobi Meyers. It was intercepted by linebacker Fred Warner. Five plays later, the 49ers capitalized with a 4-yard touchdown run by Kyle Juszczyk.

His second pick came in the second quarter on a deep pass over the middle of the field also intended for Meyers that was about 10 yards too long and easily snared by Emmanuel Moseley.

In the third quarter, after Newton threw his final interception of the day on a short pass intended for Julian Edelman, the veteran receiver could be seen on the sideline voicing his frustration. Newton said it was justified for a receiver who has been targeted 12 times over the past two weeks, but has just five receptions. Edelman has also yet to catch a touchdown pass this season.

As for the roots of the issues, Newton dismissed any notion of his having lingering issues with his surgically repaired shoulder. He also said he doesn't think they are related to his mechanics.

“So I just got to be better. And a lot of things starts and stops at that position and I understand that. And I have put this team in a rut with the performances here, and yet just start over with Monday and see where it goes.”