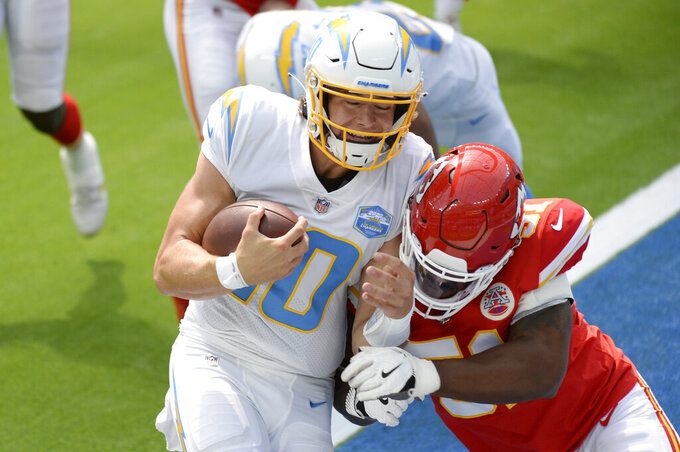 Los Angeles Chargers quarterback Justin Herbert runs into the end zone for a touchdown next to Kansas City Chiefs defensive end Michael Danna during the first half of an NFL football game Sunday, Sept. 20, 2020, in Inglewood, Calif. (AP Photo/Kyusung Gong)

Anthony Lynn did a good job throughout the offseason and training camp of installing Tyrod Taylor as the Los Angeles Chargers' starting quarterback — even after Justin Herbert was taken with the sixth overall pick in April's draft.

But after Herbert came on as a last-minute starter and threw for 311 yards in Sunday's 23-20 overtime loss to Kansas City, Lynn has the makings of a quarterback controversy on his hands.

The coach is trying to squelch any sense of a competition by saying: “Tyrod Taylor 100% is our quarterback.” Lynn said Taylor was in the team's building Monday, but didn't have any update on his status for the upcoming week.

“The veteran QB gives us the best chance to win. I know what to expect from him and know what we are going to get done,” Lynn said. “Justin stepped up and gave us a chance. I’m really excited about Justin, but I want to put him out there when he’s ready. He’s a rookie and has a lot to learn about."

Herbert found out less than a minute before kickoff that he was going to get his first NFL start after Taylor couldn't play due to complications from a chest injury. Instead of being fazed, Herbert became the ninth quarterback since the merger to post a 300-yard game in his debut and was the first in 66 years to rush and pass for a touchdown in the first half of his first game.

Taylor led the Chargers to a 16-13 win in the Sept. 13 opener at Cincinnati, but struggled at times in throwing for 208 yards. The offense had four three-and-out drives and didn't gain consistency until the second half.

Herbert finished 22 of 33 with a touchdown and interception. The offense had only two three-and-outs, but one was on the opening possession of overtime.

Herbert showed tremendous accuracy on a TD pass to Jalen Guyton and a 25-yard throw to Keenan Allen in the third quarter between two defenders that had a 22.9% completion probability according to the NFL's Next Gen Stats. But he also made a costly error in the third quarter with an ill-advised throw downfield that was picked off by L'Jarius Snead instead of scrambling and taking the first-down yardage.

“I think Tyrod did a great job in Week 1 and had stuff to build on," running back Austin Ekeler said. "I still think he’s probably in the starting role. But going forward, you know, he’s gonna have to prove just like all of us that, ‘Hey, I deserve to be in this spot.’ I feel comfortable with both of them. I think it just comes down to the performance.”

Herbert and Ekeler had similar numbers in downfield throws, but Herbert did a better job of getting Ekeler and Joshua Kelley involved on screens. Herbert was 6 of 6 for 73 yards, while Taylor had only two screens in the opener.

Lynn's goal of making this a run-first team has been accomplished through the first two games. The Chargers lead the league with 83 rushing attempts and their 55.3% rush percentage leads the AFC and is second in the NFL.

Ekeler has gone over 80 rushing yards in consecutive games for the first time in his four-year career, while Kelley has provided a nice balance as a between-the-tackles type back.

Keeping someone to spy on the quarterback so they don't scramble for huge yards. The Chargers have already allowed four quarterback scrambles of over 10 yards, with two going for 20 yards or more. Kansas City's Patrick Mahomes had a 21-yard scramble on third-and-20 late in regulation to get the Chiefs into field goal range.

“I’ll just say we just have to stay locked in,” linebacker Kyzir White said. “We just have to know that's how teams are going to try to attack when they've got a quarterback that can run.”

DT Jerry Tillery has had a strong start after having a disappointing rookie season. Last year's first-round pick blocked an extra point and had a pair of quarterback hits.

Desmond King played 44 of the 77 defensive snaps, but the fourth-year defensive back thinks he should be on the field more. When safety Derwin James was lost for the season due to a knee injury, many thought that would open up more opportunities for him to get more plays because of his versatility in the secondary.

King took to social media after Sunday's game and tweeted: “I’ll continue to do my job but I’m going to need answers real soon.”

Lynn responded to King's tweets on Monday by saying, “I think everyone knows where to get those answers. They may not like the answers, but they know where to get it.”

7 — Consecutive losses in division games with six decided by seven points or fewer. This is the Chargers' second losing streak of at least six games in AFC West contests since 2010.

The Chargers face NFC South teams the next three weeks, beginning next Sunday when they host the Carolina Panthers. Los Angeles is 8-4 against NFC teams under Lynn, but Los Angeles has dropped three straight and five of six to Carolina.