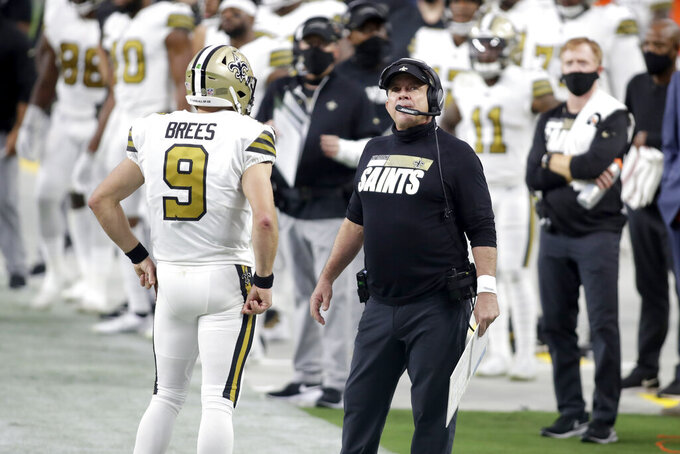 FILE - In this Sept. 21, 2020 file photo, New Orleans Saints head coach Sean Payton, right, speak with quarterback Drew Brees (9) during the first half of an NFL football game against the Las Vegas Raiders, in Las Vegas. The NFL has fined the New Orleans Saints $500,000 and stripped them of a 2021 seventh-round draft pick for violating league COVID-19 protocols, a person with direct knowledge of the discipline told The Associated Press on Sunday, Nov. 29. New Orleans was fined as a repeat offender; Payton previously was docked $150,000 and the team $250,000 because the head coach failed to properly wear a face covering against the Raiders in Week 2. (AP Photo/Isaac Brekken, File)

NEW ORLEANS (AP) — Saints record-setting quarterback Drew Brees “looked good” in his first practices since returning from rib fractures and a punctured lung, and is slated to start against the Kansas City Chiefs on Sunday, coach Sean Payton said.

“We went off how it felt as he went through a full practice week. And he’s done a good job,” Payton said after Friday's practice.

Brees has missed four games since his injury, which occurred when he was sacked against San Francisco.

Taysom Hill has started in Brees' place, going 3-1. Even before Brees' injury, Hill would intermittently take snaps under center to provide New Orleans' with a change-of-pace, read-option QB. So he could continue to see snaps at QB as well.

"We have a number of personnel groupings to give us some flexibility and we’ll go from there,” Payton said.

Payton said Brees would be wearing a protective vest over his torso, but the coach dismissed the idea that the Saints were rushing the 41-year-old QB back from injury.

“We wouldn’t be playing him if he wasn’t healthy and able to function and feeling good and recovered,” Payton said.

Brees is the NFL's career leader in yards passing with 79,612. He has 565 TD passes to rank second behind only one active QB, Tampa Bay's Tom Brady, who has 571.

The Saints (10-3) enter the weekend tied atop the NFC with Green Bay, but the Packers would own the tie-breaker for the No. 1 playoff seeding — and the only playoff bye — in the conference by virtue of a Week 3 victory in New Orleans.