'Revolution is on' as Jackson takes Ravens to AFC North lead 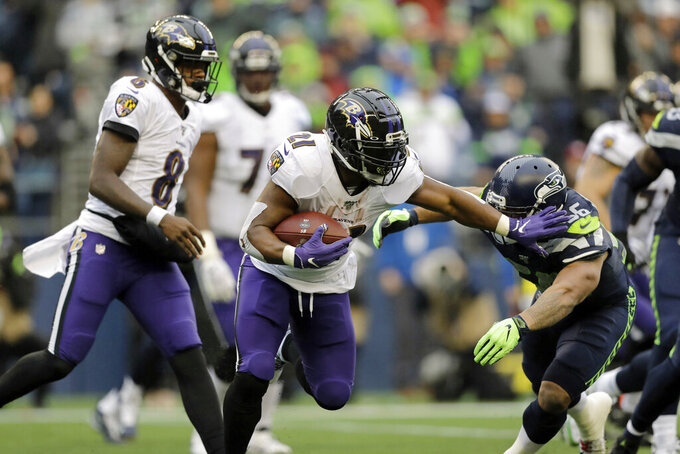 OWINGS MILLS, Md. (AP) — Darting between and past would-be tacklers with uncanny guile and deceptive quickness, Lamar Jackson is the focal point of a run-oriented offense in the NFL's pass-happy world.

Baltimore Ravens coach John Harbaugh and offensive coordinator Greg Roman overhauled the playbook during the offseason, gearing virtually every facet of the attack to take advantage of Jackson's extraordinary skills. The finished product is not only unique, but exceedingly productive.

The Ravens (5-2) entered their bye week with more points than any team but the Patriots. And, even though Baltimore owns the NFL's top rushing attack, Jackson has proven to be an adept passer, too: He threw five touchdown passes and registered a perfect quarterback rating in a 59-10 season-opening rout of Miami.

"The revolution is on," Harbaugh declared Monday. "For those who are paying attention, there's something pretty cool going on, and it's right here in Baltimore."

Jackson ranks fifth in the NFL with 576 yards rushing, more than the combined total of seven teams. The 2018 first-round pick out of Louisville has three 100-yard games and is averaging a robust 6.9 yards per carry.

"You've got to respect that man's game. He's one of a kind. You don't see a lot of quarterbacks like that," Seattle's Chris Carson said after Jackson ran for 116 yards and a touchdown to lead the Ravens past the Seahawks 30-16 on Sunday.

From 2008 to the middle part of last season, Harbaugh put his faith in strong-armed quarterback Joe Flacco. The duo paired to reach the playoffs six times and won a Super Bowl together in 2012. But after Flacco sustained a hip injury last year, Harbaugh turned to Jackson, who stayed on after Flacco got healthy and led a late charge that earned the Ravens the AFC North title.

Flacco was subsequently traded to Denver, and now Harbaugh's all-in on the slick-footed Jackson.

"He always impresses me," Harbaugh said. "I love the guy. I love the person, the player."

Jackson will run when necessary and throw if dared. Stack the line, and he'll fling the ball downfield. Whatever it takes to win.

Against Miami, Jackson ran three times for 6 yards because the pass was there. The following week, he ran for 120 yards against Arizona — because he could.

"Defenses approach me different, so I just have to play off of them and take advantage of them," he said.

The 2016 Heisman Trophy winner's competitive nature was on full display in noisy Seattle. When center Matt Skura failed to snap the ball as Jackson adamantly clamored for it from the shotgun formation, the Ravens drew a delay of game penalty. Jackson slammed the ball to the ground in disgust but followed up with a good-natured tap on the helmet to Skura, letting him know all was forgiven.

Although Jackson is the main reason why Baltimore has won three straight and owns a huge lead in the AFC North, he's had plenty of help.

After replacing Ozzie Newsome, the only general manager the Ravens ever had, rookie GM Eric DeCosta has done a solid job. Not only did he sign free agent running back Mark Ingram, who's turned out to be a bruising contributor, but DeCosta shored up a defense that lost free agent linebackers Terrell Suggs, C.J. Mosley and Za'Darius Smith.

Safety Earl Thomas was obtained during the offseason and has since been joined by cornerback Marcus Peters and linebackers L.J. Fort and Josh Bynes, providing defensive coordinator Don Martindale plenty of options.

The depth chart will expand when Baltimore returns from the bye to face New England at home in a highly anticipated showdown between two of the best teams in the conference. If all goes as planned, injured linebacker Patrick Onwuasor (ankle) and cornerback Jimmy Smith (knee) should be healthy enough to contribute the rest of the way.

For decades, the Ravens relied on their defense to win. This year, the unit is playing a supporting role to an offense led by a slashing, dashing quarterback.

"Lamar put the team on his back, scrambling when it's third-and-long, third-and-short, staying inbounds, leaning on the ankle," Ingram said after Baltimore's statement win in Seattle. "I don't know how he does it, but man, he's a beast. I feel like he's going to be the greatest one day."