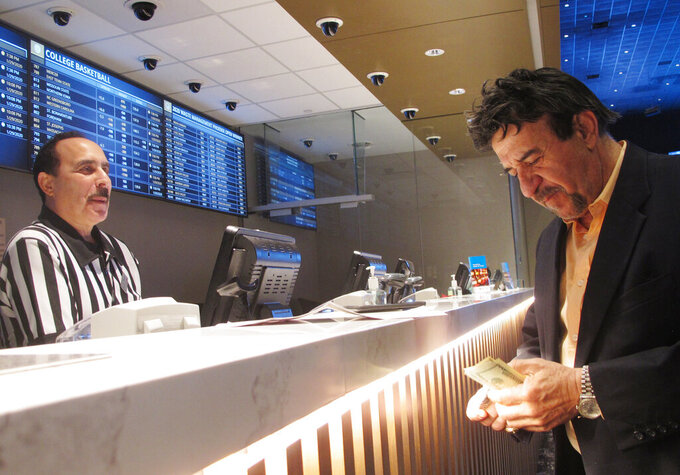 In this Jan. 29, 2020 photo, a man makes a bet on the upcoming Super Bowl at Bally's casino in Atlantic City, N.J. Business was brisk at sports books around the country on Super Bowl Sunday, with customers risking money on everything from the coin toss at the start of the game, to the color of the Gatorade dumped on the winning coach, Kansas City's Andy Reid, at the end of it. (AP Photo/Wayne Parry)

ATLANTIC CITY, N.J. (AP) — Gamblers in Nevada wagered $154.7 million on this year's Super Bowl, an increase from last year but still below the high set in 2018.

The Nevada Gaming Control Board released its Super Bowl betting figures on Tuesday, a day later than expected, because of technical difficulties with one of its licensees collecting and reporting betting data.

The Nevada totals were the highest in the nation, where 14 states now offer legal sports betting. The 190 sports books there won nearly $18.8 million, for a hold percentage of 12.1%.

The amount wagered in Nevada represented an increase from last year's figure of $145.9 million, but it still trailed the $158.5 million that was bet on the 2018 Super Bowl.

The amount bet on the Super Bowl in Nevada, known as the “handle,” was three times higher than in New Jersey, the second-largest sports betting market. New Jersey's casinos and horse tracks took in $54.2 million, up from $34.8 million. But New Jersey's 10 retail sports books and 19 sports wagering mobile applications lost $4.28 million on the game, for a negative hold percentage of 7.8%.

Pennsylvania, which released its own figures Tuesday, handled $30.7 million in Super Bowl wagers, leading to a $3.3 million loss for sports books.

Mississippi regulators reported taking in $6.7 million worth of bets on this year's game, but they did not immediately calculate how much of that was paid out to customers who made winning bets.

In Rhode Island, with the New England Patriots not in the Super Bowl for the first time in four years, gamblers showed less interest in betting on someone other than Tom Brady. The $5.5 million wagered was about 84% of the $6.5 million wagered last year when the Patriots beat the Los Angeles Rams.

Rhode Island's sports books had a hold percentage of 14.6%. That worked out to a hold of about $805,000 for the sports books, about half of which goes to the state. Last year when the Patriots won, the sports books lost $2.3 million.

West Virginia took in nearly $3.9 million in bets on the big game, up from $2.8 million a year ago. It did not immediately provide hold percentage information.

Several other states, including New York and New Mexico, said they do not calculate Super Bowl bets separately.