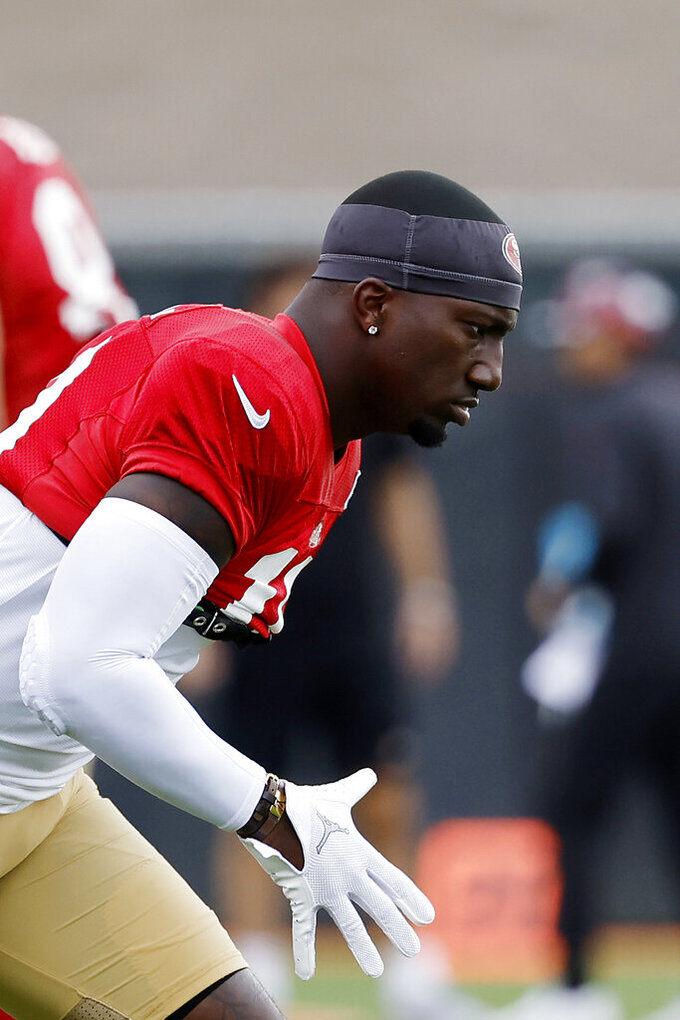 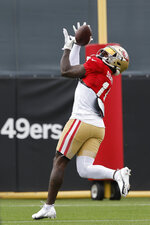 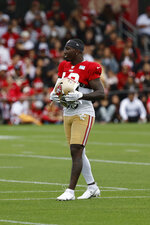 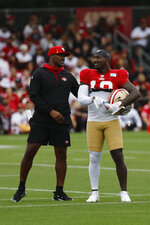 The two sides finalized the deal that will pay Samuel $71.55 million with $41 million fully guaranteed at signing on Monday.

“It was awesome to get Deebo’s deal done,” coach Kyle Shanahan said before practice. “I know it’s been a while but I’m just pumped they got it done and I know how pumped he is and we are and he'll be back at practice.”

The deal ends a months-long saga that began before the draft when Samuel publicly demanded a trade. He stayed away from the team for the voluntary portion of the offseason but reported for mandatory minicamp in June and training camp last week.

But Samuel was “holding in” and hadn’t taken part in any practices as his representatives finalized the latest rich wide receiver contract.

Shanahan said that once he got to talk to Samuel in person this offseason he was confident a deal would get done and was hoping it would be finalized before the first padded practice Monday.

All-Pro left tackle Trent Williams said he had been talking to both sides during the whole process as a mentor to Samuel and a leader on the team.

He was confident a deal would get done but had to wait for the two sides to finalize it.

“I never wanted to overstep and boundaries because Deebo worked his whole life to get into this position,” Williams said. “You don’t work your whole life on this dream and get in this position and let someone else tell you what to do. I just offered my little two cents when he asked for it. ... Deebo did a great job of just ignoring the outside noise.”

Getting Samuel back on the practice field was a priority for the 49ers so he could get to work with new starting quarterback Trey Lance. After drafting Lance third overall last year, the Niners are turning the offense over to him in 2022 and want as much time as possible to build a rapport between Lance and Samuel.

Samuel took part in practice Monday, participating on a limited basis in both team and individual drills as he works his way back up to speed

Samuel had been set to be paid nearly $4 million in the final year of his rookie contract this season after being a first-team All-Pro in 2021. But he became the 14th receiver to receive a contract with an average annual value of at least $20 million, with 11 of those deals being signed this year.

Samuel emerged last season as one of the most dangerous offensive players in the game with the unique ability to thrive as both a running back and a receiver in Shanahan’s offense.

“My favorite thing about Deebo is how much he inspires people,” Shanahan said. “He inspires me more than almost any player I’ve watched on the field. The way he runs the ball, whether you’re handing it to him, whether you’re throwing it to him, whether he’s catching on a kick. These aren’t things that we have to talk him into doing. He usually talks us into doing. Deebo loves playing football and he loves helping this team win.”

Shanahan said Samuel's side never brought up his usage as a running back in contract talks and that it's possible he would still be used that way again this season if it was best for the team.

The contract includes incentive clauses that can earn Samuel up to an additional $650,000 a year based on rushing yards and TDs, according to ESPN.

NOTES: The 49ers signed DL Akeem Spence to a one-year deal and placed DL Maurice Hurst (biceps) on IR. ... DT Javon Kinlaw got a scheduled rest day after participating in team drills for the first time on Saturday.