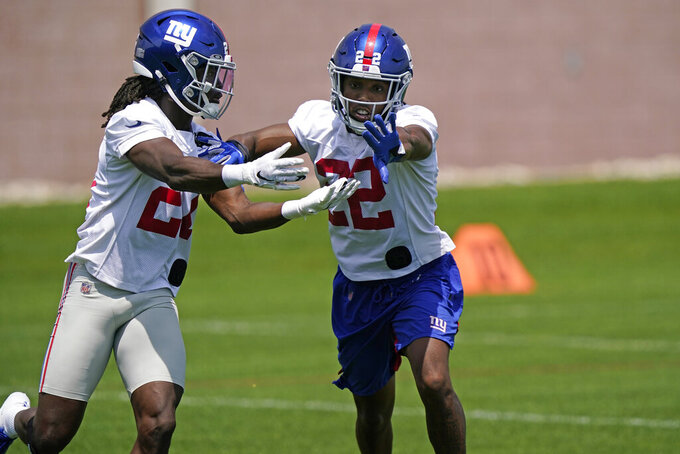 EAST RUTHERFORD, N.J. (AP) — After free agency and the draft, most of the talk concerning the New York Giants was about how many more weapons quarterback Daniel Jones will have this season.

Defensive coordinator Pat Graham picked up more than a couple, too, led by cornerback Adoree Jackson.

Jackson, who signed a three-year, $39 million contract as a free agent, gives the Giants a cornerback who is almost as dependable as James Bradberry. The former Tennessee Titan can go one-on-one with nearly anyone.

“I think that’s the beauty of Pat Graham,” Ryan said. “I think we have good players and I think Pat Graham has to — or does a great job of — making the defense fit the players. I don’t know, but I think we have a versatility to do multiple positions.”

The key might be Jackson. If he can shut down an opponent's other big receiver, the Giants will be much better off than last season. Bradberry was outstanding doing that, but the other cornerbacks had trouble handling one-on-one coverages.

Jackson isn't looking for the starting job to be handed to him.

“Just trying to come prove myself, just trying to get respect from my peers,” said the 25-year-old, who is entering his fifth season. “Obviously I played with some (guys), some time had changed, things had changed and everything’s different when you go place to place. So I’m just trying to prove myself and show these guys that I’m willing to learn and play for the team.”

"I like the feel that he brings to the secondary,” Bradberry said. “Right now we are trying to get our chemistry down and get the communication down. But I think we are going to be pretty solid. He’s a great athlete and he’s also smart as well.”

The Giants finished 12th in the league in defense last season, a major improvement from the 2019 season, which was Pat Shurmur's last as head coach.

Joe Judge came from New England to take the head coaching job and hired Graham, whom he knew from their days with the Patriots.