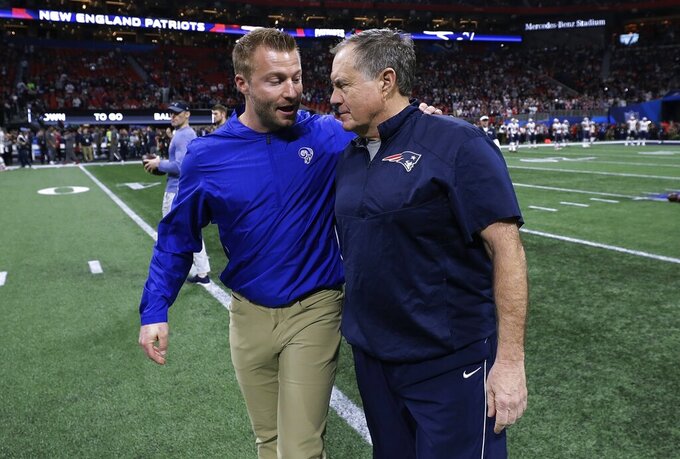 FILE - Los Angeles Rams head coach Sean McVay, left, and New England Patriots head coach Bill Belichick speak before the NFL Super Bowl 53 football game in Atlanta, in this Sunday, Feb. 3, 2019, file photo. Less than two years ago, McVay became the youngest head coach to lead his team to the Super Bowl. The big game was played in his hometown, and the Los Angeles Rams' opponents were led by one of his coaching idols. Set up for the best day in an up-and-coming football coach's life, it turned into the absolute worst, thanks to Belichick and the Patriots. McVay and the many remaining Rams (8-4) get their first chance at a measure of atonement when they host Belichick’s Patriots (6-6) on Thursday night, Dec. 10, 2020. (AP Photo/David J. Phillip, File)

INGLEWOOD, Calif. (AP) — Less than two years ago, Sean McVay became the youngest head coach to lead his team to the Super Bowl. The big game was played in his hometown, and the Los Angeles Rams' opponents were led by one of his coaching idols.

Everything was set up for the best day in an up-and-coming football coach's life. It turned into the absolute worst, thanks to Bill Belichick and the New England Patriots.

“It was a very humbling night for myself,” McVay said this week. “I didn’t think that I did nearly a good enough job for our football team to give us a chance to be crowned world champs.”

McVay, Aaron Donald, Jared Goff and the many remaining Rams (8-4) get their first chance at a measure of atonement when they host Belichick’s Patriots (6-6) on Thursday night in an important game for both teams’ playoff hopes.

Los Angeles is tied for first place in the tough NFC West, while New England has clawed into the AFC hunt with four wins in five games after its worst start to a season since 2000.

But while the Patriots' ugly victory in February 2019 was just one of six championships for Belichick, the 13-3 loss was an embarrassment for Los Angeles and its wunderkind coach, who believes he overprepared for the game. The size of the Rams' failure when they reached the sport's biggest stage hasn't been forgotten by the rest of the NFL — and certainly not by fans of the Rams' opponents.

“That’s just a loss,” Donald said. “I try to not think about the loss. But you know, this (Thursday) is definitely a game that’s going to give you a little bit more push just for a little payback.”

Los Angeles became the first team in 53 years to fail to score a touchdown in a Super Bowl thanks to Belichick’s thorough outcoaching of McVay. New England amplified strategies used by Chicago earlier in the season to utterly shut down Goff and the Rams’ offense, holding it to just 260 yards.

Los Angeles still sees versions of those strategies two seasons later. McVay’s offense, while still quite competent, has yet to recapture consistently the high-scoring, innovative form it had throughout his first two seasons.

The most interesting portion of the rematch should be what Belichick does this time against McVay's schemes, which feature many of the same skill-position players. The Patriots still have six defensive starters from that Super Bowl, along with two more who opted out of the season.

“First of all, you take away how good Coach Belichick is,” Goff said of his memories of the Super Bowl, in which he went 19 of 38 with an interception by Stephon Gilmore. "It’s not a night that you're particularly happy with, but an experience that you’re able to hopefully draw from as time goes on throughout my career.”

New England had less travel disruption for this game than the Rams, who flew home from a win at Arizona. The Patriots were already in Southern California for their 45-0 thrashing of the Chargers, and even that little bit of rest could be valuable with only three days of preparation.

“It was a big advantage (Sunday night) to be able to play the game and come back to the hotel and watch the film,” Belichick said. “Players are resting, no travel involved and all that. So it’s almost like having a home game.”

Thursday’s matchup will feature the NFL’s two least-penalized teams. The Patriots have been whistled for a league-low 45 penalties, followed by the Rams at 51.

The Rams committed just 187 total yards in penalties in their first six games, but they've had more penalty yards than their opponents in four of the past five.

Cooper Kupp was a key receiver for the 2018 Rams, but he missed the Super Bowl after a midseason knee injury. The fourth-year pro leads the Rams this season with 74 catches for 836 yards, still forming his productive duo with Robert Woods.

“We didn’t see him two years ago,” Belichick said. “He certainly makes a big difference.”

The Patriots have the NFL's third-best rushing offense with 150.9 yards per game, while the Rams have the league's third-best rushing defense, allowing 93.1 yards per game. Los Angeles hasn't allowed a 100-yard rusher all season long, but New England's Damien Harris and Sony Michel have combined for four 100-yard games this season. Cam Newton also is a major threat with 435 yards and 11 touchdowns on the ground.

The Patriots' offensive line was solid against Joey Bosa and the Chargers, but it faces an even stiffer challenge this week opposite Donald, who's second in the NFL with 11 sacks.

Patriots center David Andrews, who has been responsible for only one of the 22 sacks New England has allowed in 2020, welcomes the challenge. While Andrews said he will watch tape from New England’s 2016 regular-season win over LA and the Super Bowl matchup, he expects Donald to bring something new.

“It’s kind of like a bullfighter, right?" Andrews asked. “You get your dance card and you’ve got to go out there and go.”