Aiyuk shows progress for 49ers after 'words' with coach 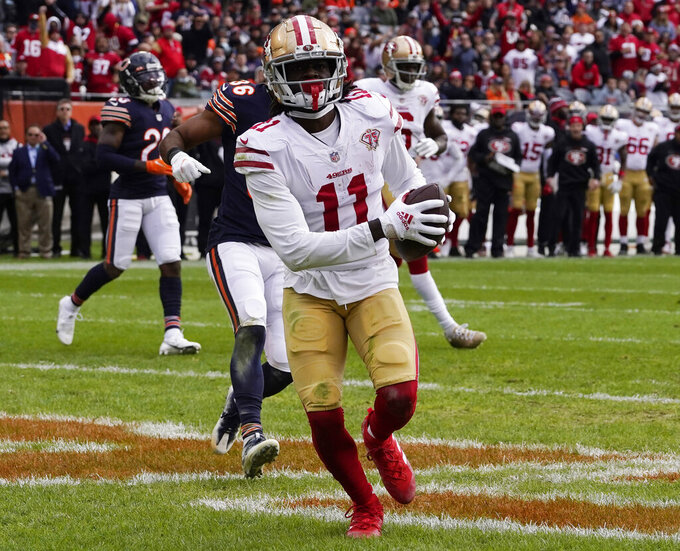 FILE - San Francisco 49ers wide receiver Brandon Aiyuk scores a touchdown against the Chicago Bears during the second half of an NFL football game Sunday, Oct. 31, 2021, in Chicago. After being a no-show offensively early in the season, Aiyuk is coming off his best game of the year this past week at Chicago with four catches for 45 yards, a 21-yard punt return that set up a TD and a key downfield block on a 39-yard run by Elijah Mitchell that helped seal the game. (AP Photo/Nam Y. Huh, File)

SANTA CLARA, Calif. (AP) — Brandon Aiyuk needed a restart to his disappointing second season in the NFL when the San Francisco 49ers headed into their bye week.

After being a no-show offensively early in the season, Aiyuk is coming off his best game of the year last week at Chicago with four catches for 45 yards, a 21-yard punt return that set up a TD and a key downfield block on a 39-yard run by Elijah Mitchell that helped seal the game.

Aiyuk said a talk with the coaching staff before the bye week last month helped him move past the slow start.

The talk with coaches included a meaningful one with head coach Kyle Shanahan that Aiyuk wouldn't detail other than to say: “Me and Kyle had some words. We had some words."

The Niners traded up six spots in the first round to draft Aiyuk 25th overall last year and the move looked like good one when he had 60 catches for 748 yards and scored seven TDs from scrimmage.

Aiyuk was expected to take on an ever bigger role this year but acknowledges that he might have lacked the same intensity for each day in practice in year two that he had as a rookie.

That led to a significant decrease in production. Aiyuk didn’t even start the opener, with Trent Sherfield getting the nod instead, and wasn’t targeted once that game.

He had just nine catches for 96 yards the first six games but teammates and coaches have praised his improved practice habits since the bye and it may be leading to better results.

“These last couple of weeks he’s looked like the player that we envisioned when we drafted him," offensive coordinator Mike McDaniel said. "He’s a young guy that’s finally starting to understand what it means to be a pro and to approach every practice like, ‘Hey, I’m determining the game on Wednesday. I’m winning the game on Thursday.’ That’s been the difference.”

That might have been most evident on his big block late in the Bears game when he came from the other side of the field to block the safety on Mitchell's long run that Aiyuk celebrated more than any of his catches.

That caught the attention of his teammates, who said those kinds of blocks were key to the success of the team in 2019.

“I think we’re starting to figure that out as a wide receiver unit again, is how important that is,” tight end George Kittle said. “That’s going to be, make a 10-yard run into a 30-yard run. I think when you make an emphasis of that and guys make it important to them and then they celebrate it, you’re going to win football games when everybody cares about every single play.”