Amid injuries, Cowboys try to be coy about rookie Parsons 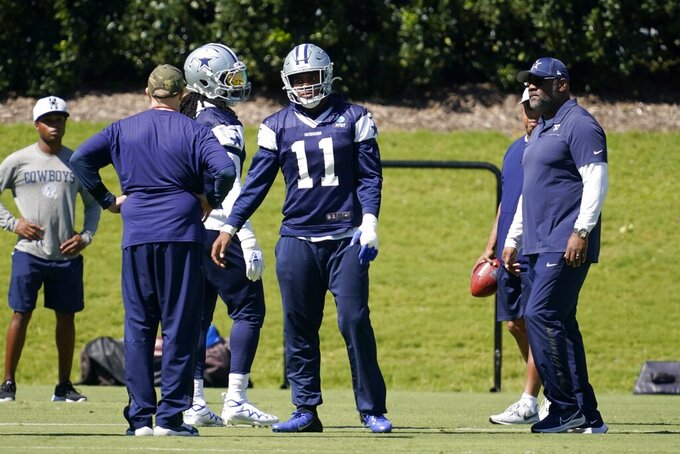 FRISCO, Texas (AP) — The Dallas Cowboys don't want to give away where Micah Parsons will line up after the versatile rookie linebacker played almost exclusively as a pass rusher in the second game of his career following a midweek switch.

Injuries and COVID-19 issues in the defensive line might be blowing their cover anyway.

Just as he did last week after star rush end DeMarcus Lawrence broke his left foot in an individual drill, Parsons spent most of his time with the defensive line during the portions of practice that were open to reporters Thursday and Friday.

The Cowboys (1-1) are trying to be coy about Parsons' role for their home opener against Philadelphia (1-1) on Monday night. But with Lawrence and fellow starter Randy Gregory out last week against the Los Angeles Chargers, Parsons chased Justin Herbert on nearly all of his 39 snaps.

Gregory is off the COVID-19 reserve list and set to play against the Eagles and another young, mobile QB in Jalen Hurts. But second-year end Bradlee Anae was the latest Dallas player to enter the health and safety protocols Friday and is likely out, along with linebacker Keanu Neal, who went on the COVID-19 list Wednesday.

Defensive tackle Carlos Watkins (knee) and end Dorance Armstrong (ankle) won't play after getting injured against the Chargers, creating an opening for third-round draft pick Chauncey Golston to make his debut after being inactive the first two weeks.

The focus, though, will be on Parsons, taken 12th overall by the Cowboys in part because they thought he could be an effective pass rusher. The former Penn State player had his first career sack and a game-high four QB hits against Herbert, the mobile NFL 2020 Offensive Rookie of the Year.

“I like just being on the field in general,” Parsons said. “I don’t think it really matters whether it’s linebacker or D-end. I feel like I’m an every-down player. Each week I’ve got to prove that. Maybe last week they just wanted to see if I could really fill (Lawrence's) shoes and how I would do. Proved them right. Going to play a lot more. You just never know where I’m going to play it at, though.”

Early in the week, first-year defensive coordinator Dan Quinn hinted Parsons could be back to some of his duties at linebacker. But that was before Watkins and Armstrong were ruled out, and before Anae was sidelined.

“I thought he did a good job and it will continue to be a part of what he does, but there’s also some good linebacker things that he does,” Quinn said. “We’re going to make sure we don’t overload him but give him the right amount that he needs.”

Parsons played 55% of the snaps in the 20-17 victory over the Chargers but wanted more. Then again, one of the highlights of the “Hard Knocks” series chronicling Dallas' training camp was Parsons almost begging to go back into preseason games.

“I like where he is at,” Quinn said. “He hit the mark where I hoped he would go as a defensive lineman in the game. Definitely a lot different when you are battling 320-pounders as opposed to guarding running backs and tight ends.”

Before Lawrence's injury, Parsons was a linebacker occasionally lining up at end and even on the interior of the line. Speed is the reason. While he struggled to get past Chargers left tackle Rashawn Slater, Parsons had little trouble running around right tackle Storm Norton.

Because Gregory has more experience rushing from the right side and facing the left tackle, there's a good chance most of Parsons' snaps against the Eagles will come from the left side.

“Sometimes throughout the week I feel we kinda get on him sometimes about his level of attention and I have to tell myself he has a lot of things that he’s doing,” Gregory said. “He’s got a lot of stuff being thrown at him."

Tarell Basham, the most experienced healthy defensive end, and second-year player Azur Kamara should be in the rotation along with Golston and Gregory — and, presumably, Parsons.

“He creates targeting challenges for the offense,” coach Mike McCarthy said. “We’ll maximize that opportunity the best we can. I think we all recognize the week that we went through last week, we had some changes midweek, and that all factors that into it, too.”

The rookie's home debut will be a game within the game: “Where's Parsons?”

NOTES: WR Amari Cooper said he ended up with cracked ribs in the 31-29 loss to Tampa Bay in the opener. Cooper played through the injury last week and plans to do so again this week. Cooper went from a career-high 13 catches against the Buccaneers to three against the Chargers. ... OT Ty Nsekhe will miss his second consecutive game after being treated for a heat-related illness after practice last week.