Amid safety talk, Cowboys draft pair of RBs behind Elliott 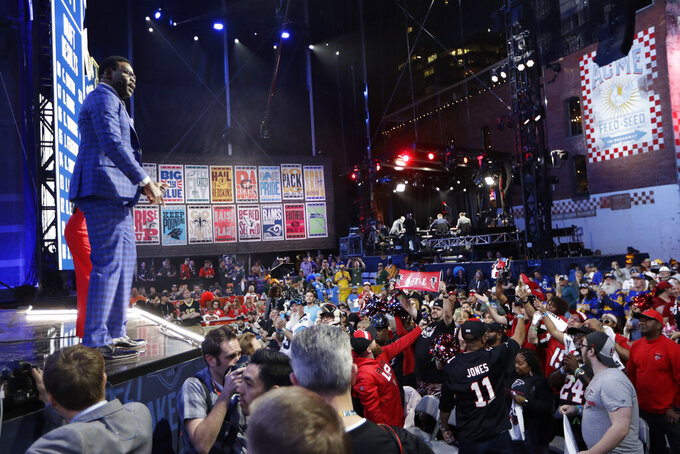 FRISCO, Texas (AP) — For all the offseason talk about safety with the Dallas Cowboys, they ended up spending more resources from the draft on potential backups for two-time NFL rushing champion Ezekiel Elliott.

Dallas used two picks on running backs, starting with all-purpose back Tony Pollard of Memphis in the fourth round Saturday. Then the Cowboys went back to Elliott's alma mater, Ohio State, for a more traditional runner in Mike Weber with one of two seventh-round choices.

Elliott was the fourth overall pick in 2016, won his first rushing title as a rookie for the NFC East champions, and did it again with another division winner last season.

The Cowboys said running back was a priority after deciding not to bring back seldom-used backup Rod Smith. But it didn't figure to rank ahead of safety since Dallas was never a serious bidder for free agent Earl Thomas, who made no secret of his desire to join the Cowboys but ended up in Baltimore instead.

Owner and general manager Jerry Jones suggested that was the plan all along. Dallas took safety Donovan Wilson of Texas in the sixth round as five of the club's eight picks were defensive choices. Cornerback Michael Jackson, taken in the fifth round, could have the flexibility to be in the mix at safety as well.

"I knew it was very possible that we could get out of here without picking a safety," Jones said. "We need to, from a standpoint of efficiency within a game as well as from managing our overall future, we need some good running back skill behind Zeke. That was a goal coming into this draft was let's let us wisely use Zeke now and in the future. So those two address that perfectly."

Pollard also has potential as a return man after tying the FBS career record with seven kickoff returns for touchdowns. He had 552 yards rushing with six touchdowns and 458 yards receiving with three more scores as a junior at Memphis.

"I think this guy can be a lot different than just a space player," executive vice president of personnel Stephen Jones said. "He can do a lot of things. What excites me the most is just his home run threat as a running back."

Weber had his only 1,000-yard season at Ohio State as a redshirt freshman the year after Elliott left, rushing for 1,096 yards and nine scores. A hamstring injury limited him as a sophomore and he had 954 yards last season.

The Cowboys followed the "best available" model with their first two picks in Central Florida defensive tackle Trysten Hill (58th overall, second round) and offensive lineman Connor McGovern from Penn State (90th, third). Dallas hadn't drafted an interior defensive lineman that high since No. 1 overall choice Russell Maryland in 1991. And coach Jason Garrett said McGovern was "by far" the best player on Dallas' board when he was selected.

It's been 10 years since the Cowboys didn't have a first-round pick, and that 2009 draft was a poor one for Dallas. Jones said the lesson from a decade earlier was to stick with the picks you have rather than trade back (the first pick in 2009 ended up being a third-rounder).

While Dallas followed that plan by making its first three picks — in the second, third and fourth rounds — the focus turned to stockpiling later when players the Cowboys wanted were drafted ahead of their slot. They traded back twice and ended up with five picks in the final three rounds.

The Cowboys made a practical choice with Hill since 2016 third-round pick Maliek Collins is going into the final year of his rookie contract. Defensive coordinator Rod Marinelli considers their spot on the interior of the line the most important position on his defense, and wants to pressure the quarterback from there.

While Dallas has invested in that spot for Marinelli, it was usually later for a coach who believes he can turn any pick, and any undrafted free agent, into a productive inside player. Collins has been a solid three-year starter, but he hasn't been a force and has battled injuries. The Cowboys don't want to rule out Hill becoming a starter.

The availability of Randy Gregory will go a long way toward determining the fate of late-round pass rushing picks Joe Jackson (fifth, Miami) and Jalen Jelks (seventh, Oregon). If Gregory is reinstated from an indefinite suspension, his fourth substance-abuse ban, it might be difficult for Jackson or Jelks to make the active roster. The Cowboys are optimistic Gregory will be allowed to return.