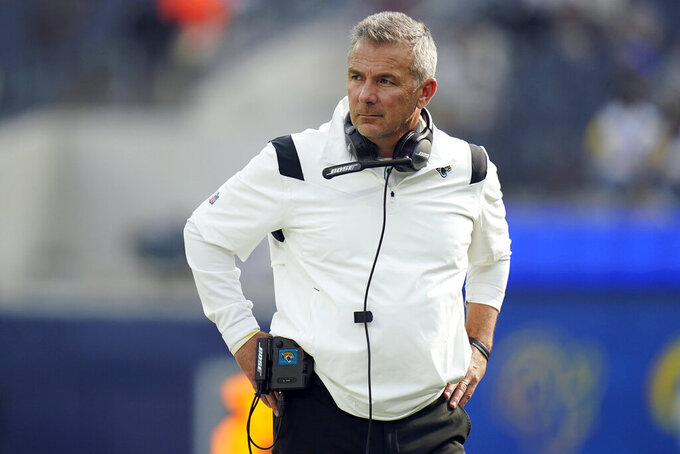 JACKSONVILLE, Fla. (AP) — Former Jacksonville Jaguars coach Urban Meyer was fired for cause and the team does not intend to pay him for the final four years remaining on his contract, a person familiar with the termination told The Associated Press.

The person spoke to the AP on condition of anonymity Saturday because neither side has publicly discussed details of Meyer’s termination. It remains unclear how much Meyer made annually. ESPN first reported Meyer being fired for cause.

Owner Shad Khan dismissed Meyer early Thursday after weeks of analysis that focused on Meyer’s mounting public blunders and even more missteps behind the scenes. The person said firing Meyer for cause was not tied to any one incident during his 11 months on the job, a tumultuous tenure that was filled with off-the-field drama and negative headlines.

“I just apologize to Jacksonville,” Meyer told NFL.com in his first public comments since he hastily left the facility without telling anyone Wednesday. “I love Jacksonville. It’s one of the reasons I took the job. I still think Shad’s a great owner.

"It’s heart-breaking. I just had a dream of it becoming a destination place with a new facility he agreed to build and some day to walk into that stadium where it’s standing room only. Because I know how bad the people of Jacksonville want it. So, I’m just heartbroken that we weren’t able to do that. I still believe it’s going to be done. It’s too good of a place.”

Meyer said he was devastated and added a familiar refrain from recent weeks: “I tell people losing eats away at your soul. Once you start losing, it’s hard on everybody."

Florida is an “at-will” employment state, meaning employers or employees can terminate employment at any time and without any advance warning. That could make it tougher for Meyer to prove he was wrongly fired or should be owed the remainder of his contract.

It’s common for disputes regarding negated guarantees to be negotiated by the two sides in hopes of finding an amicable resolution that would avoid a lengthy and potentially expensive legal battle.

The Jaguars (2-11) host Houston (2-11) on Sunday, with offensive coordinator Darrell Bevell serving as interim coach. Bevell got the nod over assistant head coach Charlie Strong because he has previous experience as an NFL head coach; he went 1-4 as Detroit’s interim coach last season.

A spokesman for Khan told The Associated Press on Friday that the decision to move on from Meyer was initially made following Jacksonville’s 20-0 loss at Tennessee on Sunday. A conversation Khan and Meyer had in the locker room after that shutout — Meyer had few answers for the team’s woes or how he planned to fix them — sealed a decision Khan had been mulling for weeks.

Khan waited several days to finally pull the plug on Meyer because he had a scheduled media event on his yacht Monday and was at the NFL owners’ meetings in Dallas on Tuesday and Wednesday. He also attended an All-Elite Wrestling show Wednesday night in Dallas. Shad Khan and his son Tony own the wrestling league.

The Jaguars ended up firing Meyer early Thursday, hours after former kicker Josh Lambo accused Meyer of kicking him during an August practice. Connecting that report by a Florida newspaper, which the Jaguars haven’t disputed, to Khan’s announcement made sense. But the Jaguars insist it was more coincidental than causative.