Arians feels Brown has matured, will be good fit for Bucs 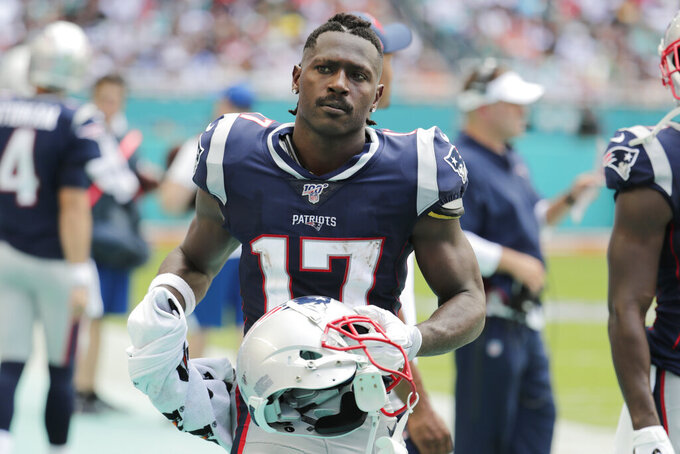 FILE - In this Sunday, Sept. 15, 2019, file photo, New England Patriots wide receiver Antonio Brown stands on the sidelines during the first half at an NFL football game against the Miami Dolphins in Miami Gardens, Fla. Brown has agreed to return to the NFL with the Tampa Bay Buccaneers on a one-year deal, according to a person with knowledge of the move. The person spoke to The Associated Press on condition of anonymity Saturday, Oct. 24, 2020 because the contract had not been completed. (AP Photo/Lynne Sladky, File)

TAMPA, Fla. (AP) — The Tampa Bay Buccaneers are off to their best start in 10 years and betting on Antonio Brown to not derail a promising season.

The suspended receiver who hasn’t caught a pass in the NFL in more than 13 months is reuniting with Tom Brady on an incentive-laden, one-year contract. Brown is expected to begin practicing with the first-place Bucs (5-2) on Wednesday.

Brown, nearing the end of an eight-game suspension for multiple violations of the league’s personal conduct policy, is eligible to play in two weeks against the New Orleans Saints.

“I think he’s matured. I believe in second chances,” coach Bruce Arians said after Sunday’s 45-20 blowout of the Las Vegas Raiders kept the Bucs alone atop the NFC South, a half-game ahead of the three-time defending division champion Saints.

Brown, who’s been accused in a civil lawsuit of sexual misconduct, played one game with Brady in September 2019 before being released by the Patriots. The Steelers and Raiders have also sent him packing since the end of the 2018 season.

Asked what he would say to women who might question why the Bucs would risk bringing in a player facing serious allegations, Arians said:

“Allegations, I’ve been around a lot of players that had allegations that weren’t true. Some were. So let the court system handle it. If it’s found out to be true, he won’t be with us.”

Arians, Pittsburgh’s offensive coordinator when Brown entered the league as a sixth-round draft pick in 2010, had previously said Brown would not be a good fit for the Bucs, who signed Brady in free agency last March. But with injuries to Mike Evans, Chris Godwin and Scotty Miller limiting the amount of time Brady has had to work with his top receivers, the stance changed and general manager Jason Licht explored the team’s options.

“Everybody wants to say that Tom picked him. Tom didn’t have anything to do with it,” Arians said.

“This is something Jason had been talking for a couple of weeks, ever since the injuries to our other guys. ... And we’ll see,” the coach added. “If Antonio does what I think he’s going to do, he’s going to be fine.”

Brown had four receptions for 56 yards and a TD in the only game he played with Brady, who described the receiver as “a tremendous football player” while declining to discuss any personal conversations he’s had with Brown.

“He’s a very hard-working guy. ... We’re all going to go out there on the practice field and do the best we can do,” Brady said. “And we’re going to see how it all fits together. It’s a lot of hard work ahead. None of it just magically happens.”

Arians, meanwhile, is happy to have an “insurance policy” for a team that’s outscored opponents 83-30 the past two weeks to emerge as one of the top teams in the NFC.

Brady has thrown for 15 touchdowns versus one interception the last five games. Tampa Bay’s start is its best since 2010, when the Bucs finished 10-6 but didn’t make the playoffs.

If Arians had a complaint after Sunday’s rout of the Raiders, it was the defense was flagged for a couple of penalties during a third-quarter touchdown drive that helped the Raiders hang in the game before the Bucs broke it open in the fourth quarter.

Miller is developing into a dependable option for Brady when he’s not targeting Evans, Godwin and Rob Gronkowski. The second-year pro had six catches for a career-best 109 yards and a TD on Sunday.

Nothing major coming out of Sunday’s game. RB Leonard Fournette (ankle) returned against the Raiders after missing two games and most of a third. He led the team with 50 yards rushing on 11 attempts and also had six receptions for 47 yards.

55 — as in points scored following takeaways, second most in the league.

The Bucs are 3-0 at home and 2-2 on the road, where they’ll be favored to beat the struggling New York Giants next Monday night.