Bears' Fields a rising star as he faces his hometown Falcons 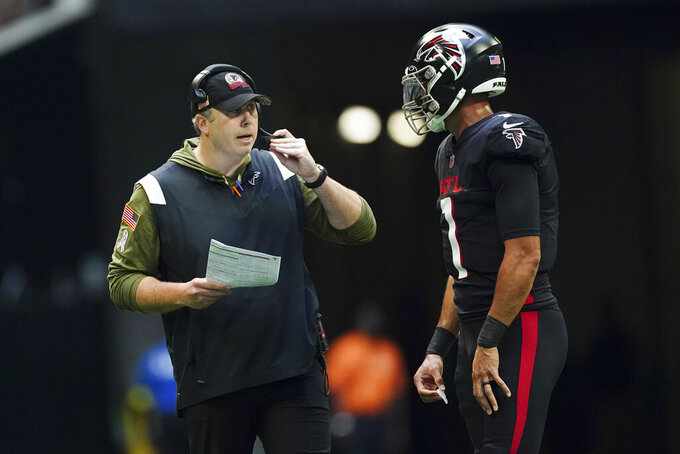 ATLANTA (AP) — Justin Fields and the Chicago Bears are learning how to score in the quarterback's second season.

Learning to win has been the more difficult lesson.

Fields will be in the spotlight for his Georgia homecoming as the Bears and Atlanta Falcons match strong running games — and deflating losing streaks — on Sunday. Fields, a native of the Atlanta suburb of Kennesaw, began his college career at Georgia before transferring to Ohio State.

Fields didn't know how many of his friends and family members will attend the game.

“I know my regular people are going – my mom, my dad,” Fields said. “But of course it’s exciting, for sure. My goal really is just to go 1-0 this week and win the game down there.”

Fields, a 2021 first-round pick, has solidified his status as the Bears' franchise quarterback by leading the NFL's top rushing offense. He returns to Atlanta after rushing for a combined 325 yards the last two weeks, the highest two-game total by an NFL quarterback, surpassing the 268 two-game total by Baltimore's Lamar Jackson in 2019.

Fields ran for 178 yards against Miami two weeks ago and added 147 in last week's 31-30 loss to Detroit. He will be the top priority for Atlanta's defense.

“He knows how to move the ball around and he knows how to use his legs to make big plays,” Falcons cornerback A.J. Terrell said. “We’ve just got to key in on the details and just make sure we attack him the right way and don’t let him loose, keep him contained and not let him get out of the pocket for sure."

After scoring 90 points in their first six games, the Bears have scored 91 in their last three. More points haven't led to more wins. Chicago (3-7) has lost three straight and six of seven.

The Falcons (4-6) have dropped two straight and three of four, but still trail first-place Tampa Bay by only one game in the woeful NFC South.

Fields' homecoming gives Falcons fans a chance to second-guess the team's decision to bypass Fields and instead draft tight end Kyle Pitts with the No. 4 overall pick of the 2021 draft. The Bears selected Fields seven picks later.

Asked this week to look back on that draft decision, coach Arthur Smith said: “There’s a lot of players available, you can go down that rabbit hole a lot of different ways.”

The Falcons traded Ryan to Indianapolis after the 2021 season and acquired Marcus Mariota before picking quarterback Desmond Ridder in the third round of the 2022 draft. Smith continues to express confidence in Mariota while Ridder has yet to make his debut.

The Bears are averaging a league-leading 201.7 yards. The Falcons rank fourth with 160.4.

Chicago became the first team in the Super Bowl era to run for at least 225 in five straight games after finishing with 258 last week.

While each team has a run-first mentality, the passing numbers have suffered. Chicago is last in the league in passing and Atlanta ranks 30th.

The Bears’ rushing attack took a hit this week when the team placed running back Khalil Herbert on injured reserve.

Herbert is the team’s second-leading rusher behind Fields with 643 yards while sharing duties with David Montgomery. He is sixth in the league at 6 yards per carry. Montgomery has 434 yards on 115 attempts.

The Falcons hope to have Terrell, their top defensive back, back on the field after missing three games with a hamstring injury.

Terrell returned to practice Wednesday. He said this is his first hamstring injury and he's trying to be careful not to rush his return.

“I’m pushing it as much as I can, just to see where I’m at,” Terrell said.

Bears rookie Jack Sanborn got his first two sacks last week and had an interception on a fourth-quarter touchdown drive negated by a penalty against cornerback Jaylon Johnson. He was one of the bright spots on a gutted and struggling defense.

The Bears have allowed 115 points over the past three games and are tied for 25th in scoring defense this season. Chicago traded three-time Pro Bowl defensive end Robert Quinn and star linebacker Roquan Smith last month.

“Those guys are getting experiences that they can’t replicate and that they need to get,” coach Matt Eberflus said. “In order to improve, you need to get the reps."