Bengals' fast start leads to another dead end, loss No. 13 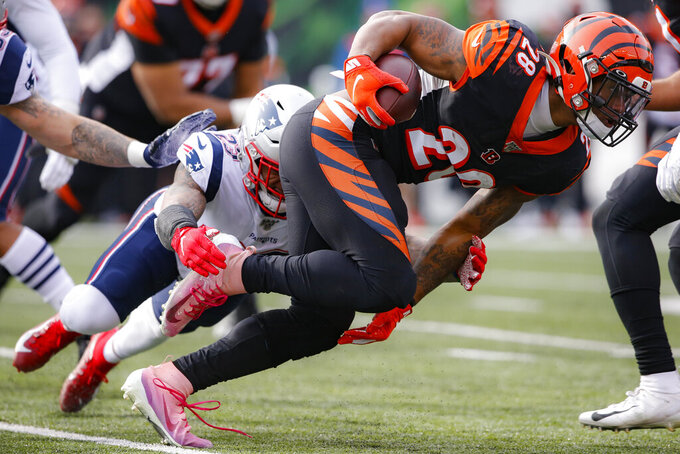 CINCINNATI (AP) — The biggest crowd at Paul Brown Stadium this season was roaring for the visiting Patriots. Even so, the home team was feeling pretty good about itself after scoring a touchdown on its opening possession.

Yes, the Bengals finally reached the end zone on their first try, ending a streak of 20 straight failures. Joe Mixon was slipping away from Patriots defenders. All was going well for once.

Andy Dalton threw four interceptions in the second half — one of them returned for a touchdown — and the Bengals had five turnovers in all that set up a 34-13 loss to New England on Sunday.

Just like that, Cincinnati (1-13) moved a step closer to clinching the top pick in the draft. A banner in the upper deck Sunday reminded the Bengals that Heisman Trophy winner Joe Burrow would be a welcomed sight in town.

The countdown has begun. Two more games — one in Miami, the other at home against Cleveland — and all the draft talk can begin.

“Do everything we can to win these last two games, and go from there,” Dalton said.

The Bengals had a little extra incentive to be ready for the Patriots (11-3) after a video crew affiliated with the team taped their sideline during a game in Cleveland a week earlier, violating league rules. The NFL is investigating.

First-year coach Zac Taylor had been on the other sideline against Bill Belichick, most recently in the Super Bowl as the Rams' quarterback coach. This time, Taylor was calling the plays. He went with the run early and often, giving the ball to Mixon or Giovani Bernard on the first eight plays.

Mixon slipped away from four Patriots on a 29-yard run. Dalton threw a touchdown pass. The Bengals added a field goal and led 10-7, silencing all those Patriots fans in the crowd of 57,066.

Then, it all fell apart.

Alex Erickson muffed a punt, setting up a Patriots field goal. Dalton then tied his career high with four interceptions in the second half, one of which Stephon Gilmore returned 64 yards for a touchdown. New England scored 17 straight points off turnovers to put it away.

“That's their modus operandi, and they did that today,” Erickson said.

Mixon finished with 136 yards on 15 carries, a healthy 5.4-yard average. He also caught three passes for 20 yards, including one that floated out of Dalton's hand as he was hit.

The receiving group is depleted by injuries. A.J. Green missed a 14th game recovering from ankle surgery. Auden Tate suffered a season-ending knee injury in Cleveland. In his second game back from a shoulder injury, John Ross III had only two catches for 24 yards.

The Patriots went with more man-to-man defense in the second half and Dalton let his receivers try to get the better of the match-ups. Instead, they went the other way.

“The quarterback's going to take all of the blame for it, when in reality he's taking some one-on-one opportunities that we had to take to be in that game,” Taylor said. “You're counting on some guys to get some separation and go compete, and they got the better of us on a lot of those.”