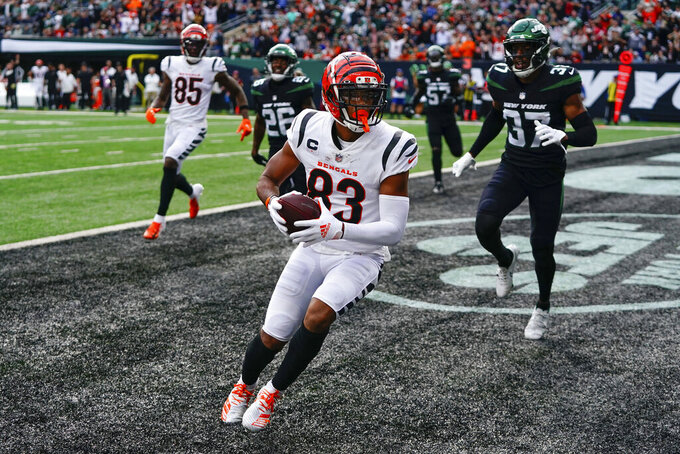 EAST RUTHERFORD, N.J. (AP) — The Cincinnati Bengals were the talk of the NFL last week after going into Baltimore and beating the Ravens.

One week later, the discussion has shifted dramatically again.

Back to the Bungles?

The Bengals followed up that 41-17 win over the AFC North-rival Ravens by blowing a 11-point fourth-quarter lead and losing to the New York Jets 34-31 on Sunday. The loss to the previously one-win Jets dropped the Bengals to 5-3 on the season.

It was the third consecutive road game for Cincinnati, and with a home game against Cleveland up next, the Bengals failed to beat a team they were a double-digit favorite to handle.

Bengals coach Zac Taylor was wary of a letdown going into the game.

“This was always in the back of your mind coming off a win against Baltimore,” Taylor said. "We spent a lot of time making sure that we were focused because I was looking for any warning signs that this would appear during the week and I didn’t see any.”

The Bengals' offense put up 31 points and the defense forced three turnovers, all in the first half, but had no answer for Mike White.

White, making his first career start with starting quarterback Zach Wilson injured, dominated the Bengals as he went 37 for 45 for 405 yards with three touchdowns and two interceptions. The Jets overall gained 511 yards.

“Defensively the tackling was bad as it’s been in a long time," Taylor said. "Just the things we’ve been good at, we were not today.

“We haven’t seen it all year, we’ve been really good in that area. We’ve just got to turn our focus toward Cleveland and move on."

“I think just the tackling,” Hubbard said. “As a unit, we didn’t tackle well. There were a lot of extra yards that shouldn’t be given away. It’s on us. We’ve got a lot of stuff to correct.”

Despite the defense's struggles, the Bengals led 31-20 halfway through the fourth quarter as Joe Burrow threw a 10-yard touchdown pass to Tyler Boyd.

“There were times in this game we were in good position,” Taylor said. "31-20 should be a position for us to be able to put our foot on their throat there and end the game, and we just didn’t handle it well enough.”

Burrow was 21 for 34 for 259 yards with three touchdowns and a costly interception in the fourth quarter that led to the Jets' winning touchdown.

“We answered their blows, they gave us their best shot, we answered it," Burrow said. "We went up two scores and then you’ve got to give credit to them.

The Jets' defensive line also shut down Joe Mixon and the running game as he finished with 14 carries for just 33 yards and a touchdown.

“We’ve got to have our team ready to go,” Mixon said. “Today we just weren’t ready. We came out flat. They wanted it more.

“We’ve got to come out there and dominate. We didn’t do that today. We’ve got to respond in a way where we come through and send a message.”

Ja’Marr Chase, who had eight catches for 201 yards last week at Baltimore, was held to three receptions for 32 yards and a touchdown. However, he had a costly drop on the Bengals' second drive after Jessie Bates intercepted White and returned it to the 1. But Chase dropped a pass in the end zone and the Bengals failed to score after Burrow was sacked on fourth down.

For the Bengals, the goal is to put this disappointing loss, their third of the season by three points, behind them before hosting the rival Browns next week.

“It’s a tough spot to be in right now,” Hubbard said. "We’ve got to look at ourselves in the mirror. The biggest thing is to go 3-0 in the division next week. We’re going to feel this pain, turn the page and get on to Cleveland.

“It’s a wakeup call for sure. Any team can beat anybody at any given Sunday. We learned that today. It’s a valuable lesson that won’t be forgotten.”