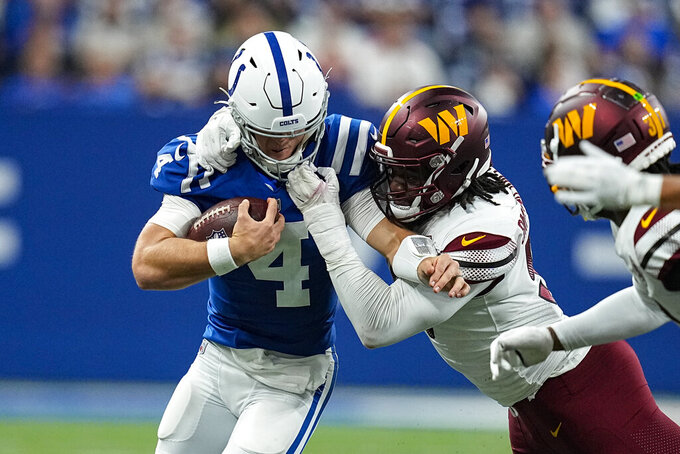 Taylor Heinicke and Terry McLaurin are justifiably getting the lion's share of the attention for helping the Washington Commanders come back to beat the Indianapolis Colts for their third consecutive victory.

But this winning streak would not be possible without the defense, which forced two fumbles Sunday and has risen to 13th in the NFL entering Monday after ranking 23rd after the first four games of the season. The unit has forced three turnovers during this run that has helped Washington get back to .500 with the Minnesota Vikings up next at home.

“I wouldn’t say (we are) ‘right where we want to be,’ but we’re definitely getting closer to where we want to be," defensive tackle Jonathan Allen said. "We still have to make some improvements on consistency, not giving up cheap stuff. You have to give the Colts credit. They have some creative plays, and they executed.”

The Commanders still give up a few big plays each game, most recently passes of 47 and 38 yards and runs of 28 and 27 yards by Indianapolis.

But they've also made several stops inside their 5-yard line and are now tied for eighth in the league in red zone defense entering Monday.

Led by Allen and Daron Payne, a former Alabama teammate and fellow first-round pick who has a team-high 4½ sacks, the Commanders have been able to get pressure on opposing quarterbacks without needing to blitz much. They have seven sacks over the past three games, including two of Colts rookie QB Sam Ehlinger on Sunday in his first NFL start.

“Changing some things up and making it look different and doing some of the things that we were doing in the past, I think, really helped,” Rivera said.

The chemistry between Heinicke and McLaurin is top notch. They've connected for 11 completions for 186 yards and a touchdown — plus the play to the 1-yard line in the final minute Sunday — since Heinicke replaced Carson Wentz as the starting quarterback.

“Maybe sometimes I force him the ball,” Heinicke said. "But I do know when the opportunity is there and the coverage is right for him to get the ball and to give him a chance, I give him the chance because he continues to make the plays.”

That was enough to get a win, but it likely won't work against Minnesota, which ranks in the top 10 in the league in rushing defense.

Thanks to the emergence of rookie running back Brian Robinson Jr., who missed the start of the season after being shot twice in an armed robbery Aug. 29, Antonio Gibson has been able to do more in the passing game. Gibson, who played receiver in college but was seen as a running back in the pros, led Washington with seven catches and had 58 yards against the Colts.

"It is giving him an opportunity to be even more dynamic," Rivera said Monday. “There’s a threat that if he gets out into space and catches the ball, he can immediately impact the offense.”

Stability on the offensive line continues to evade the Commanders, with struggling veteran Trai Turner returning to right guard in place of Saahdiq Charles, who was sick last week.

Washington has used numerous combinations along the line this season, including four different starting centers.

Rivera said pass rusher Chase Young is expected to take part in practice Wednesday, starting his 21-day clock to be activated off the physically unable to perform list. It's not clear when Young will be available to play, though he is starting with positional drills before ramping up to team activities.

Young, doctors and the team are taking a methodical approach to his return after the 2020 Defensive Rookie of the Year tore the ACL in his right knee last November and underwent surgery that involved grafting part of his left patellar tendon to fix the tear.

41 — Years since Washington had two fourth-quarter scoring drives that began inside its 20-yard line until Sunday at Indianapolis. The previous time? Sept. 20, 1981 at the St. Louis Cardinals.

Prep for old friend Kirk Cousins and the Vikings, who opened as 3½-point favorites on FanDuel Sportsbook.

Cousins played his first 62 NFL games for Washington from 2012, when he was the team's fourth-round pick the same year Robert Griffin III went second, to 2017. Only Allen, punter Tress Way and injured center Chase Roullier remain from Cousins' tenure with Washington.