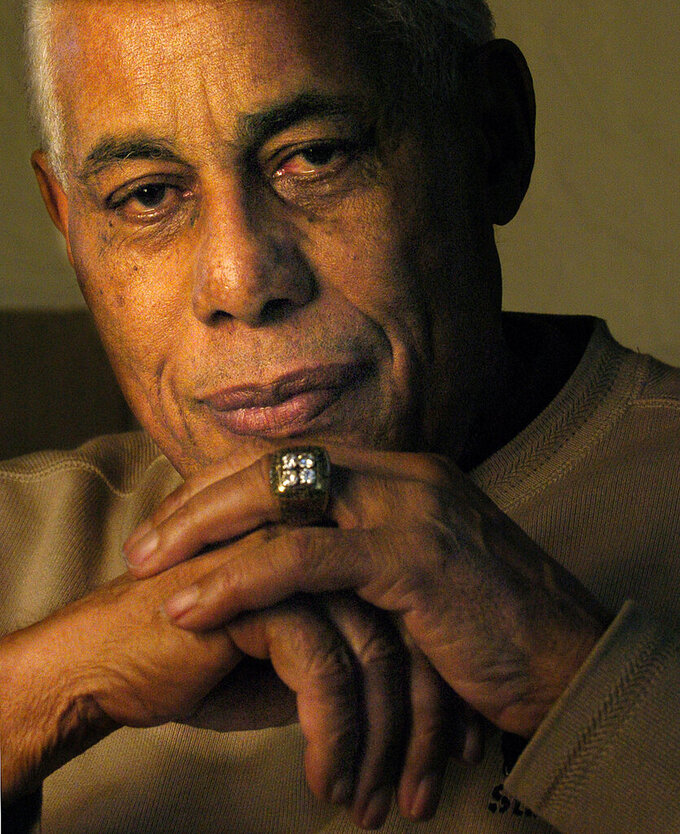 This Thursday, April 15, 2004, photo shows Bill Nunn in Pittsburgh. For those who consider the Steel Curtain teams of the 1970s as the NFL’s all-time best, the name Bill Nunn needs to be remembered. And honored. That happens in Canton, Ohio, next week when Nunn enters the Pro Football Hall of Fame as part of the class of 2021 as a contributor. (Peter Diana/Pittsburgh Post-Gazette via AP, File)

For those who consider the Steel Curtain teams of the 1970s as the NFL’s all-time best, the name Bill Nunn needs to be remembered.

Next week, that happens in Canton, Ohio, when Nunn enters the Pro Football Hall of Fame as part of the class of 2021 as a contributor.

Nunn, who died in 2014, was directly responsible for finding talent from the Historically Black Colleges and Universities (HBCUs). And get a load of some of the talent he came up with for the Steelers, who won four Super Bowls in six seasons in the 70s: Mel Blount, John Stallworth and Donnie Shell (all Hall of Famers), L.C. Greenwood, Frank Lewis, Dwight White, Ernie Holmes and Joe Gilliam.

“He was the authority, while working for the (Pittsburgh) Courier, on HBCU football,” says former NFL executive Bill Polian, also a Hall of Fame member. “He might well have been termed the ‘Scout-in-Chief of HBCU football.’ Bill Nunn helped create one of the greatest teams of all time.”

Nunn was a sports writer and editor — his father was managing editor — at the Pittsburgh Courier, one of the most influential Black publications at the time. He developed strong relationships with players and coaches at the vastly under-scouted HBCUs. In 1970, he resigned from the newspaper to join the Steelers as a scout, though he had done part-time work for the franchise for several years.

Make that “super scout” given his production; he also found Jack Lambert at Kent State, and the linebacker wound up in Canton, too.

“Bill meant everything to the Steelers organization,” current Pittsburgh general manager Kevin Colbert said. “It’s been documented, the players he was instrumental in bringing to the Steelers and the success they had. We as young scouts were fortunate to be around Bill and try and learn things they implemented when they put those teams together. There were a lot of lessons being taught to us.”

Nunn is the first African-American contributor in the Pro Football Hall of Fame.

“I think the heritage of Bill, he is in here already because he is in the Black College Football Hall of Fame,” said David Baker, president of the Canton shrine. “The Pittsburgh Steelers would turn over every stone to find the best talent, the people who were going to be Pittsburgh Steelers: Donnie Shell, LC Greenwood, Mel Blount. All of these guys came from Historically Black Colleges and Universities.”

The Courier began selecting an annual Black College All-America Team in 1950 and did so through 1974. A well-known tale around the NFL and college football dealt with that season, and Nunn’s role in getting Alabama A&M’s Stallworth to Pittsburgh.

Stallworth struggled in his 40-yard dash in wet conditions before several scouts at what now is known as a pro day. While the other scouts headed elsewhere, Nunn stayed behind, went back to time Stallworth on a dry track, and the results were substantially better.

Nunn also procured some game film of Stallworth, a rarity back then, which he used to help persuade the Steelers to draft the wide receiver in the fourth round. Stallworth became, well, a stalwart on those four championship teams.

“We had side conversations that no one ever knew about,” Shell told the Steelers’ website. “He was a confidant. If I had some issues, if I didn’t do well in practice, I would talk to Bill and it wouldn’t go any further than that. He would sit me down and say keep working hard and doing what you are doing, you will be fine. When you are young, that gave you encouragement to keep working hard. Nobody ever knew about that.

“I don’t know if he realized it or not, but just being around Bill, his professionalism, the way he carried himself in his life, it meant a lot to me and had a great effect on me. He never would have thought that. That is the way he was, unassuming. That was Bill. That is who he was. He made people gravitate to him. You wanted to be with him. You wanted to be in his presence to listen to some of the wisdom that he had.”