Broncos back in last place after another meltdown vs Chiefs 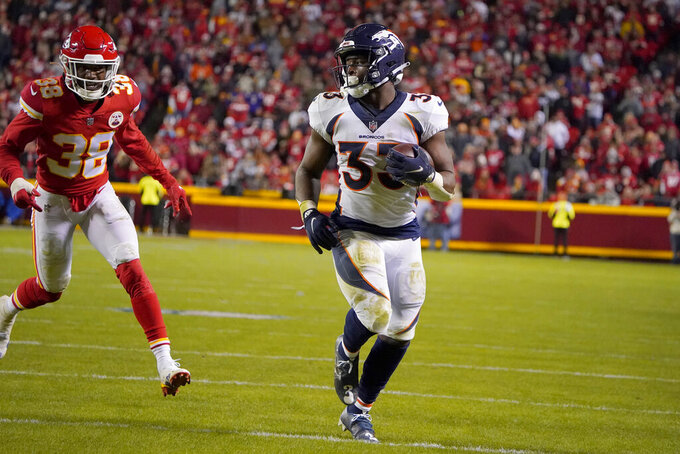 Denver Broncos running back Javonte Williams, right, runs past Kansas City Chiefs cornerback L'Jarius Sneed (38) on his way to a touchdown during the second half of an NFL football game Sunday, Dec. 5, 2021, in Kansas City, Mo. (AP Photo/Ed Zurga)

ENGLEWOOD, Colo. (AP) — With the AFC West lead so tantalizingly in reach, the Denver Broncos fumbled, bumbled and stumbled their way to another loss against Kansas City, plunging to their familiar whereabouts in the division's cellar instead.

As usual, coach Vic Fangio's defense was exceptional against Patrick Mahomes and company. And per usual, his offense was atrocious and his special teams abominable in their 22-9 loss.

“When you play a team like this, you have to get sevens (because) threes aren't enough,” Teddy Bridgewater said in the lead-up to the showdown Sunday night.

That's why the Broncos (6-6) went on fourth-and-2 at the Kansas City 8 late in the first half when a field goal would have cut their deficit to 10-6.

Rookie running back Javonte Williams, who had a monster game, was confused, however, lining up wrong and looking frantically toward the sideline for help that never came before taking the handoff and losing a yard.

“By the time that we knew there was confusion," Fangio explained, “it was too late to call a timeout."

“I thought we were in the gun, but we were under center,” Williams said of just about the only blemish on his career night in which he became the first rookie in franchise history to top 100 yards rushing and 75 yards receiving in a single game.

So, the Broncos were left with nothing to show for a 20-play drive that covered 83 yards and kept Kansas City's explosive offense on the sideline for more than 11 minutes.

That epitomized the Broncos' night of missed chances that featured three turnovers. Bridgewater threw two interceptions, including a pick-6, and rookie Caden Sterns ran into punt returner Deionte Spencer at the Denver 15-yard line for another costly giveaway.

Fangio always leaves blueprints for the real contenders to copy against the Chiefs, more well-rounded opponents with better offensive creativity and productivity, and sounder special teams discipline and execution.

Fangio found a way to limit Mahomes to 184 yards on 15-of-29 passing with no touchdowns and an interception, an effort that should have been enough for the Broncos to beat him for the first time in eight tries.

Instead, they extended their losing streak to the Chiefs to an even dozen.

Denver's defense has held Kansas City to an average of 22.6 points in five losses under Fangio. A whole lot of good that does when his offense has averaged a mere 10 points a game in those five defeats.

The theme coming out of Denver's locker room is that the Broncos are going to treat the rest of their games as playoff contests. Dreams of the postseason are all this team has had to hold on to ever since the slide began in 2016 with Peyton Manning's retirement that set in motion a carousel of quarterbacks and supporting staffs unable to put the Broncos back in contention.

“We are still in the hunt,” Fangio declared, “and we can take care of business.”

The ground game, and now that Williams has shown what he can do in the lead role, he should keep it even when Melvin Gordon (hip, shoulder) gets healthy. Fangio said he expects Gordon to return to practice this week. Williams scored Denver's only touchdown and his backup, Mike Boone, had 54 yards on five touches.

GM George Paton's first draft class featuring CB Pat Surtain II, who had his third interception in two weeks, and Williams, who drew praise not only for his carries and catches but for his blocking.

“I’m happy that he had a game like he had tonight,” Bridgewater said. "We have to do better around him. If he’s making plays like that, we’ve got to do better and all elevate our games, as well.”

Sterns running into Spencer wasn't the Broncos' only special teams meltdown. They started their long drive at their 3 because of Aaron Patrick's holding call. And Spencer should have fair caught a punt with 10 seconds left in the first half, giving Denver at least a chance of getting into field goal range.

Broncos oft-injured NT Mike Purcell was a surprise inactive with a thumb injury. “It was more opponent based,” said Fangio, explaining that the heavy dose of nickel defense meant Purcell wasn't going to play much anyway.

1 for 6 — Fangio is now 1 of 6 in coach's challenges this season and 4 of 14 as Broncos coach after failing to get an incompletion to Travis Kelce overturned. Kelce took two steps and was tucking the ball when Kyle Fuller knocked it out and Justin Simmons scooped it up.

“Since they called it incomplete on the field, they stayed with it," Fangio said. “I think if it had been called a fumble on the field, it would have stayed fumble.”

Hosting the no-longer-winless Lions (1-10-1), who have actually been to the playoffs more recently than Denver, earning an NFC wild-card berth in 2016.