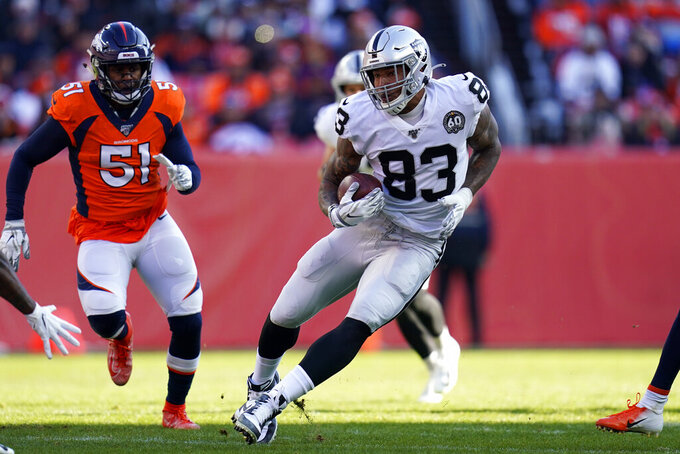 DENVER (AP) — Shelby Harris capped his breakout season with a knockdown that officially knocked out the Oakland Raiders.

The nose tackle who was cut three times by the Raiders before blossoming in Denver batted down Derek Carr's 2-point pass to Hunter Renfrow with 7 seconds left Sunday and the Broncos put at end to the Raiders' dim playoff hopes — and to Oakland's run as an NFL city with a 16-15 win.

Shelby Harris said he knew all he had time to do was get his hands up high.

The Raiders (7-9) nearly made the Broncos (7-9) pay dearly for Garett Bolles' 15th penalty of the season. His personal foul long after the whistle pushed Brandon McManus way back for a 57-yard field-goal attempt, which sailed wide, giving Oakland the ball at its 45-yard line with 1:41 remaining trailing by 7.

Carr hit Renfrow for the touchdown on second-and-goal from the 3 — the first time the Raiders reached the end zone in five red-zone trips — and coach Jon Gruden decided to go for the win instead of the tie.

"We lost our linebackers. We only had 1½ linebackers left," Gruden said. "We really didn't want to go to overtime. We were running out of men."

At the snap, he had an inkling it was the right call, too.

"We felt we're going to win that game right there with that route," Gruden said. "Doggone Shelby Harris batted it down."

Carr said had Harris not gotten his hand on the ball, Oakland wins.

“Oh, 100%,” Carr said. “Renfrow ran the perfect route and was wide open. I went to throw it and Harris moves and gets his hand on it.

“I'm sure someone will blame me for that one, but you've got to give Shelby credit for making that play,” Carr added. “It's just tough in that situation. Especially like you get this feeling inside when it opens up and you're like, ‘We have it. This is the win!' For the ball to get batted down, it hurts your heart.”

The Raiders had an outside shot of making the playoffs for just the second time since 2002, but they needed several things to go right, starting with a win. Instead, they ended their time in Oakland with another losing record as they head to Las Vegas in the new year.

“Definitely would have liked to win it," Renfrow said. “But it was good that we didn't stop fighting. We kind of knew we were out of the playoff race when Tennessee won, and so I think it was a great job of not only the offense, but the defense getting stops and just finishing.”

The Broncos posted their third consecutive losing season but they head into 2020 with renewed optimism thanks to rookie quarterback Drew Lock, who went 4-1 in his five starts. The Broncos finished 7-5 after a winless first month under first-year head coach Vic Fangio.

“Although 7-9 is a record that nobody's proud of and it's not the rich tradition that this franchise is used to, I do think it says something about the guys,” Fangio said.

Lock completed 17 of 28 passes for 177 yards and a 1-yard TD toss to fullback Andrew Beck, whose first career TD catch gave Denver a 10-3 halftime lead. The score was set up by safety Trey Marshall's recovery of Marcell Ateman's fumble.

“Overall, the last five games, I thought my audition went really well,” said Lock, adding he would speak soon with both his boss, John Elway, and Peyton Manning, for tips about handling the upcoming offseason.

Carr was 29 of 46 for 391 yards and the TD throw to Renfrow, who caught six passes for 102 yards to go with tight end Darren Waller's six catches for 107 yards.

The Broncos' top-rated red-zone defense showed up Sunday with four stops, none bigger than Von Miller 's stuff of fullback Alec Ingold on fourth-and-goal from a foot away in the first half after a TD catch by Renfrow was overturned on review.

That marked the Broncos' first goal-line stand since Oct. 22, 2017, against the Chargers.

The Raiders also stalled at the 20 (missed field goal) and the 5-yard line, which left them trailing 10-3 at halftime despite outgaining the Broncos 209-83 yards through the air.

“It was terrible,” Gruden said. “We had a great opening drive, thought we had Renfrow wide open for a look and we didn't convert that, and we missed a short field goal. We had a touchdown to Renfrow called back by our friend in New York. I thought we scored. I thought we were in on Ingold's play. That's a zilch. Then we had a drive where we settled for a field goal.

“Good defensive team. Fangio's good. They have good players. We left a lot out there. There were plays to be made and we didn't make them.”

It wasn't easy, but Phillip Lindsay gained 53 yards on 18 carries to top 1,000 yards rushing for the second straight season.

“I was told he's the only undrafted player in the history of the NFL to do that,” Fangio said. “That's a hell of an accomplishment. It's also not a very good accomplishment for all of the people that bypassed him in the draft.”

Lindsay said: “It was probably the toughest 1,000 yards I've ever had to get in my life (but) I got to showcase my toughness and my ability to be an every-down back.”

Raiders: Leading rusher Josh Jacobs was held out again with a shoulder injury and an illness. They lost MLB Will Compton to a concussion and WLB Nicholas Morrow was nicked up.

Broncos: Head into offseason for first time since 2014 not looking for a new head coach or a new starting quarterback.