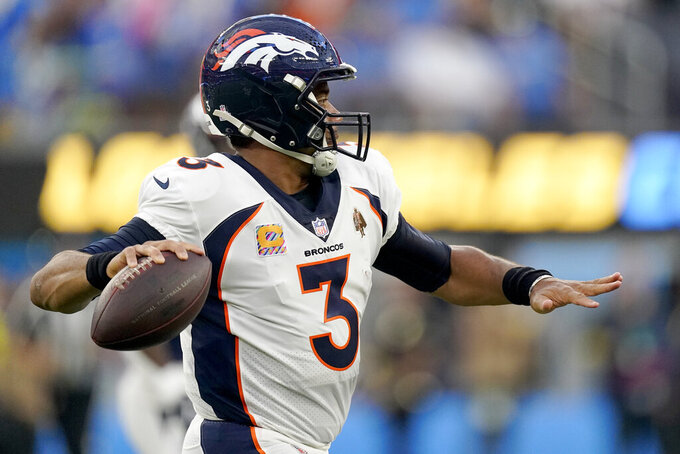 ENGLEWOOD, Colo. (AP) — Nathaniel Hackett defended his handling of the lead-up to his first year as head coach of the Denver Broncos on Tuesday.

Hackett said the rash of injuries and penalties and the offensive struggles under quarterback Russell Wilson have nothing to do with him taking it easy on the players in the summer.

“I think a lot of the injuries that we're having are kind of crazy from the standpoint of the amount of ACLs,” Hackett said after announcing that linebacker Aaron Patrick was lost for the season with a torn ACL after a sideline mishap in the Broncos' 19-16 loss to the Chargers on Monday night.

Patrick, who got a cleat stuck on a carpet and plowed into a sideline worker, is the fifth Broncos player to tear an ACL this season.

The Broncos (2-4) are allowing just 16.5 points per game, but they're last in the league with a 15.2-point scoring average behind Russell Wilson, whom Hackett said is day to day with a strained hamstring he sustained against the Chargers.

“I think from the standpoint of the offense getting in rhythm, I think we had a lot of great practices” last summer, Hackett said. “For whatever reason, there’s certain things that we’re missing, whether they’re pressing, that consistency is not there.”

Hackett didn't play his starters in the preseason and his players hardly hit or broke a sweat in training camp.

Absent were the staple 7-on-7 drills that helps quarterbacks build confidence and rapport with their receivers and the 1-on-1 pass rush drills where O-linemen are more comfortable tweaking their technique than during 11-on-11s.

General manager George Paton concurred with Hackett's approach that emphasized safety and science ahead of risk and ritual. Paton said it was a plan that Hackett detailed in his job interview.

The goal, both men said, was to finish strong even if they started slow, which is exactly what they've done.

Out of sync with most of his targets, Wilson has just five touchdown passes, putting him on pace for a career-low 14, and his 20 sacks have him on track for a career-high 57.

More than a dozen players have gone on IR so far and the Broncos lead the league with a whopping 54 penalties, putting them on pace for 153, which would be 70 more than they committed last year.

Wilson looked as if he had finally figured it all out Monday night when he completed 12 of his first 14 passes for 173 yards and a score, hitting nine different receivers during a 10-for-10 start.

Yet, even during that hot start, he had tight end Greg Dulcich wide open for a first down before the pocket collapsed as he held onto the ball too long, something that's become a disturbing pattern.

After driving the Broncos to the Chargers 9 in the closing seconds of the first half, Wilson reverted to the quarterback quandary he's become for the Broncos, misfiring three on short passes and bringing on his kicker for a field goal.

It only got worse in the second half and overtime when he completed just 3 of 11 passes for 15 yards. Add the lost yardage on a trio of sacks and the Broncos were a net minus-9 yards passing after the break.

For the second straight game, TV cameras caught a Broncos receiver displaying his anger. Last week, it was KJ Hamler who threw his helmet onto the ground after the Broncos lost to the Colts in overtime, and this time it was Jerry Jeudy complaining on the sideline late in the game.

“You want them to be frustrated to a certain extent," Hackett said, “because they want to win."

The offense, including Melvin Gordon, who didn't get a snap after running three times for 8 yards early on.

Besides Wilson and Patrick, CB Essang Bassey will miss time with a pulled hamstring.