Broncos waive Gordon after another fumble leads to a loss 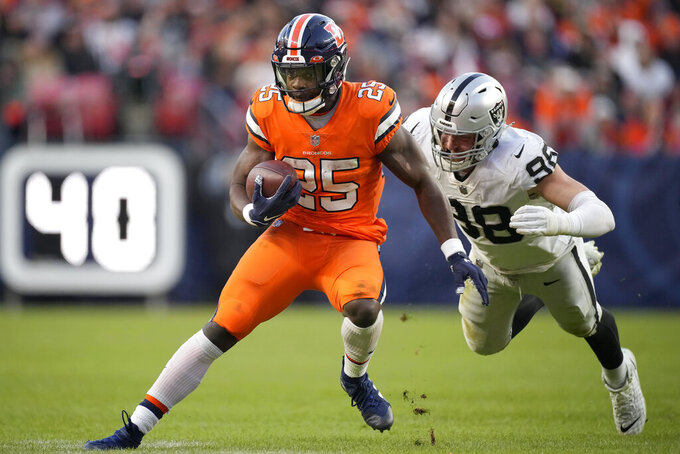 DENVER (AP) — Melvin Gordon's butterfingers finally cost him not just his starting job in Denver but his roster spot altogether.

The Broncos waived their veteran running back Monday, a day after his fumble at the goal line proved costly in their 22-16 overtime loss to the Los Vegas Raiders that sent them tumbling into the AFC West basement at 3-7.

Gordon, who has a penchant for fumbling in crucial situations in his career, burst up the middle on third-and-1 from the Raiders 3 in the waning seconds of the first half. He had the first down, but was still trying to get into the end zone when Raiders defensive end Maxx Crosby punched the ball from his arms.

Broncos guard Quinn Meinerz recovered the loose ball at the 7, and Brandon McManus trotted out for a 25-yard field goal on fourth-and-5 that Crosby blocked as the first half expired.

That squandered the Broncos' long drive that started at their 16 and they followed that letdown with their seventh scoreless third quarter of the season on their way to their sixth one-score loss.

Gordon had two touchdown runs this season to go with five fumbles, two of which he lost. That gave him 26 career fumbles, 18 of them recovered by opponents. Nobody in the NFL has more fumbles or lost fumbles than Gordon over the past decade.

He fumbled a dozen times in his two-plus seasons with the Broncos, losing nine of them. Three of his last seven fumbles were returned for touchdowns and two more came within a step of the goal line.

Gordon's fumble at Las Vegas in Week 4, which cornerback Amik Robertson returned for a 68-yard touchdown, changed the tenor of the game and jump-started the Raiders' 32-23 win on a day the Broncos lost rising star running back Javonte Williams to a season-ending knee injury.

Gordon's job status seemed in jeopardy then because TV cameras showed him crestfallen on the sideline and not interacting with his teammates the rest of that October afternoon. A day later, he “liked" a bunch of tweets suggesting the Broncos cut him loose.

Instead, coach Nathaniel Hackett met with Gordon to reassure him he was his starter.

This time, he met with him and wished him well.

“He's a true pro. He's done a lot of good stuff here with the Denver Broncos and scored some touchdowns for us this year, and we thought it was best for the team and we've moved on and I wished him the best of luck,” Hackett said Monday. “I think it's great for him to have a fresh start.”

Hackett said he would go forward with a rotation of Latavius Murray, Marlon Mack and practice squad running back Devine Ozigbo. Mike Boone is also working his way back from a high ankle sprain.