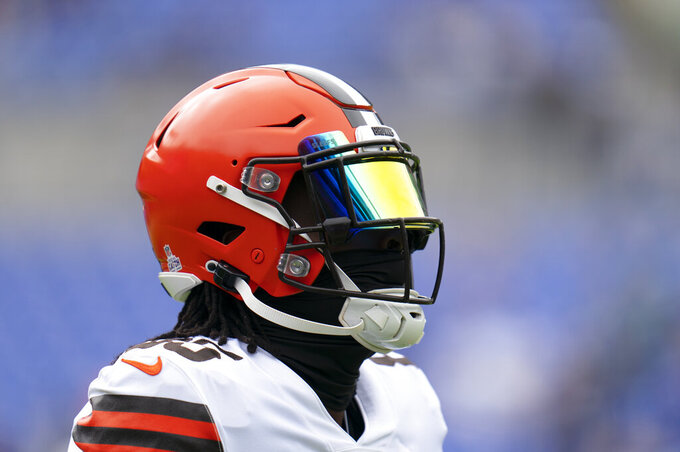 Njoku is tied for the team lead with 34 receptions. He got hurt during the second half of last week's loss at Baltimore. Njoku had seven catches for 71 yards before injuring his ankle while running in traffic after a shovel pass.

Ward has been in concussion protocol since sustaining a head injury in the fourth quarter against the Los Angeles Chargers on Oct. 9. He didn't practice this week. Ward has had at least three known concussions in his career.

Coach Kevin Stefanski was asked if Ward's injury could be long-term.

“With all of those, you have to treat them so specifically to the player, to the symptoms and those type of things and really treat it day by day,” he said. "You check in every day and make sure that the person is progressing appropriately before they move on to the next part of that protocol.”

Newsome, who starts on the opposite side from Ward, has been limited this week.

Rookie Martin Emerson Jr. is expected to make his third start in a row for Ward, with A.J. Green getting time in third-down packages as the Browns (2-5) try to slow down Bengals quarterback Joe Burrow, who will be without star receiver Ja'Marr Chase due to a hip injury.

Owusu-Koramoah had his best game last week, recording six tackles and forcing a fumble against Baltimore, but the Browns dropped their fourth straight. Stefanski didn't specify when Owusu-Koramoah got hurt, saying he came in during the week with lingering effects.