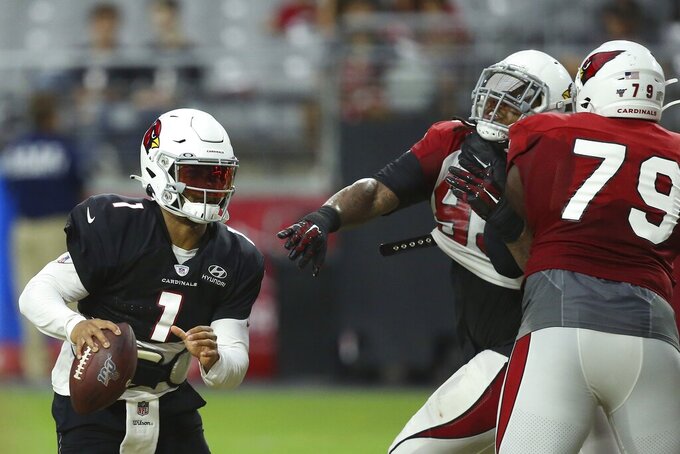 TEMPE, Ariz. (AP) — The Arizona Cardinals have released defensive end Darius Philon, a day after Maricopa County jail records indicate he was arrested and booked into jail on suspicion of aggravated assault with a deadly instrument.

The Cardinals announced the move Saturday in a one-sentence statement.

A Phoenix police spokeswoman, Sgt. Maggie Cox, confirmed Saturday that Philon had been arrested, but declined to provide further information, referring a reporter to court documents that were not immediately available Saturday.

According to TMZ, Philon was taken to a Maricopa County jail Friday on charges from an incident in May outside a Phoenix-area strip club. A court video of Philon's initial court appearance posted by KPNX-TV showed that a judge set bond for Philon and imposed conditions that included allowing Philon to travel out of state for work.

Phillip Noland, an attorney who represented Philon during the brief court appearance, did not immediately respond to a request by The Associated Press for comment.

The 25-year-old Philon was a projected starter after signing in the offseason as a free agent. He started the Cardinals' preseason opener Thursday night against the Los Angeles Chargers and played briefly, recording an assist on a tackle. The team had Friday off and reconvened for training camp Saturday without him.

"We're aware of the situation and the serious allegations," Cardinals head coach Kliff Kingsbury said before Philon was released. "It's been reported to the league (NFL), so we will allow that process from a league perspective and a legal standpoint to move forward."

The Cardinals signed Philon to a two-year, $10 million contract in March. The former sixth-round draft pick out of Arkansas spent his first five NFL seasons with the Chargers, starting 19 of 54 career games with 9 1/2 career sacks.

Kingsbury said rookie Zach Allen, a third-round pick out of Boston College, will take over as the starter at Philon's position.

NOTES: Safety Josh Shaw suffered a shoulder injury against Los Angeles and is expected to miss a week or two, Kingsbury said. LB Haason Reddick, a former first-round pick who is on the physically-unable-to-perform list after arthroscopic knee surgery, is still expected to return around the time of the first regular season game.