Carr, Garoppolo excel in prove-it years while some struggle 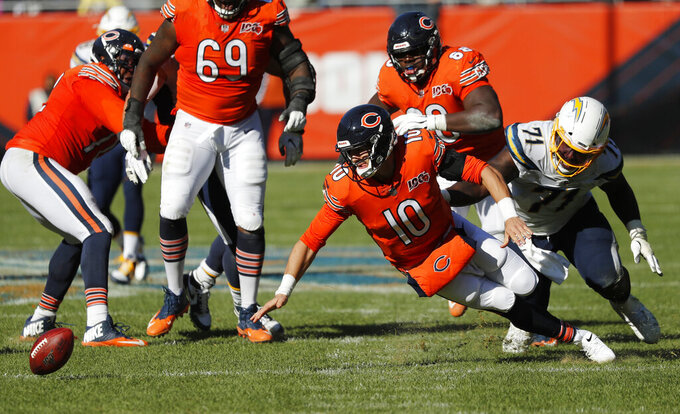 ALAMEDA, Calif. (AP) — Derek Carr has silenced the questions of his long-term viability as the starting quarterback for the Raiders by looking once again like the quarterback who was one of the top young passers in the league back in 2016.

Jimmy Garoppolo is proving why the San Francisco 49ers invested so heavily in him after only a handful of NFL starts by leading the NFL's only remaining undefeated team.

While Carr and Garoppolo have stepped up their performances in what were viewed as prove-it seasons, that hasn't been the case for other quarterbacks who came into the year in similar scenarios.

Tennessee's Marcus Mariota and Cincinnati's Andy Dalton have already been benched and seem poised to be looking for a new job next season, while Mitchell Trubisky appears close to playing himself out of a job in Chicago in just his third season.

Jameis Winston has once again displayed the type of up-and-down performances in Tampa Bay that led to the Buccaneers deciding to let him play out his fifth year option instead of getting a long-term contract.

The Raiders are happy with their situation with Carr, who is leading one of the league's most efficient offenses following two disappointing season.

Carr is operating with the same play-caller in back-to-back seasons for just the second time in his six-year career. He believes it's no coincidence that those have been his two best seasons, with him leading the Raiders to 12 wins in his second season under coordinator Bill Musgrave in 2016 and now ranking as one of the top quarterbacks this season at the halfway point.

Carr is posting his highest career marks in completion percentage (71.2, yards per attempt (7.9) and passer rating (105.1). He has been at his best in key spots with his 140.1 passer rating on third down ranking highest in the league in 25 years.

"I think he's a coach on the field instead of a player on the field," Gruden said. "Learning a new offense last year, he was playing, and we had two rookie tackles. We had a lot of issues, a lot of injuries, a lot of problems last year. I don't want to reiterate those, but he was playing the best he could play and he played pretty good. But, now he's coaching. He sees it before it happens."

Mariota and Dalton both struggled this season in their first years under new systems and have been benched.

Mariota, the second overall pick in 2015, has gone through three head coaches and five play-callers and has failed to build on a promising start to his career. He completed less than 60% of his passes this season and got benched for Ryan Tannehill after going 7 for 18 for 63 yards and two interceptions in a loss at Denver last month.

With Mariota set to become a free agent next year, it appears as if he will need to find a new home if he ever wants to live up to his draft billing.

"That's solely on my shoulders," he said. "I had an opportunity to play, and I didn't make the most of it. I'm going to learn and grow from it. This is an opportunity for me to grow as a person and as a player."

Dalton got benched after eight-plus seasons as starter in Cincinnati with the Bengals looking for a change after an 0-8 start. Dalton led Cincinnati to the playoffs his first five seasons but the team never won a playoff game in that stretch and he has struggled the past few seasons as the offensive line deteriorated and top receiver A.J. Green missed a lot of time with injuries.

Dalton has one year left on his contract but the Bengals can get out of it with no dead money if they decide to go another direction.

"If this is the end here, I don't know," Dalton said. "I don't know what the future holds, but this is not how I envisioned it."

Trubisky figured to be on safer ground after taking big steps forward under coach Matt Nagy in his second year in the NFL. But Trubisky has regressed badly from the start of the season and ranks 29th out of 32 qualifying quarterbacks with an 80 passer rating.

Making matters worse is the fact that the Bears went all-in, trading two first-round draft picks last season for edge rusher Khalil Mack and now will have a hard time finding a replacement in next year's draft if they decide to move on from the 2017 No. 2 overall pick.

"There is a lot of really simple things that we did last year that we do in practice that on game day we are coming up short," he said. "And that's why you have this crappy feeling, and that's where the frustration comes. Losing sucks."

The questions about Garoppolo heading into the year were as much about his durability as his performance. He went down with a season-ending knee injury in Week 3 last season and had made only 10 career starts in his first five seasons, while suffering two major injuries.

He had some rough moments in training camp and the preseason, only intensifying the criticism that was only slightly quieted by San Francisco's fast start behind a dominant defense and running game.

But Garoppolo delivered the best performance last week in a 28-25 win at Arizona when the defense was gassed and the running game struggled to get going.

He threw for 317 yards, four TDs and no interceptions, delivering several big passes on third and fourth down for San Francisco's second four-touchdown game in the past 16 years.

"We all know Jimmy can throw it and get his numbers," coach Kyle Shanahan said. "He's gotten it before. We haven't needed it this year, but he's done it before. I thought the most impressive thing was the amount of times we threw, how many plays he made and that we had no turnovers with it."

That's been the problem with Winston, who makes some of the most impressive throws as well as the most bone-headed. He has thrown for 2,407 yards and 16 touchdowns at the midpoint of the season. But he also has 12 interceptions and four lost fumbles, giving him 92 turnovers in five seasons — 16 more than the next highest player.

But the good might be enough to earn him a sixth year in Tampa Bay while some of these other passes could be looking for work.