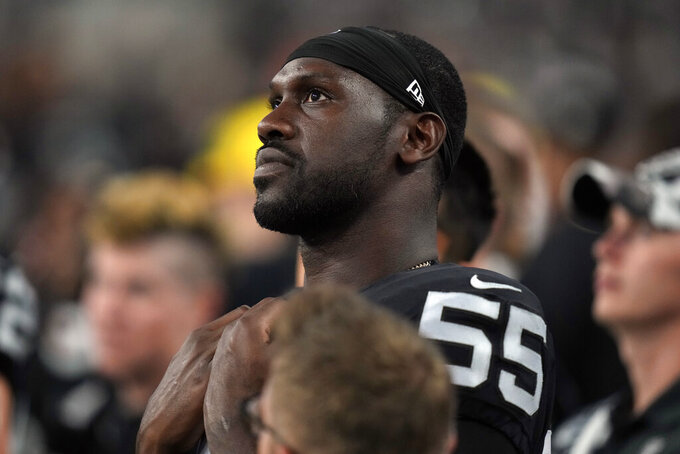 HENDERSON, Nev. (AP) — Las Vegas Raiders defensive end Chandler Jones has had a big impact on his teammates since being signed in March.

On the field, on the sidelines, at practice, in meetings, in their personal lives — Jones is, as they say, a vibe.

“I almost can’t wait to see Chan in the morning, because you know what you’re going to get,” receiver Davante Adams said. “He’s got an infectious type of personality. We joke around all the time, and he’s a great guy just from a vibe standpoint. Then you get him on the field and then you talk about a guy ... just the way he goes about his business, the type of examples that he sets, the type of leader that he is.”

Jones brought 10 years of experience with him, including the past six with the Arizona Cardinals, who visit Las Vegas this Sunday.

“We have a ton of respect for him,” Arizona coach Kliff Kingsbury said. “I think he’s obviously a freak when you talk physicality. A special, special player in that regard. But he’s always thinking about the next move, the next play, and how he’s going to beat a guy.”

Which is why Kingsbury had one message for Jones when the two were texting ahead of Sunday’s game.

“Don’t hold it against me when we chip you and edge you with the tight end and back every single play,” Kingsbury said, describing his text. “We’re going to try to handle him, but they’ve got two Hall of Fame rushers and we understand that, so we’ve got to have a good plan.”

Quite the compliment for Jones and fourth-year pro Maxx Crosby, who plays on the opposite end of the line.

But that’s the type of respect Jones has earned wherever he’s gone.

Second-year defensive end Malcolm Koonce said Jones has made it easier to see things thanks to the simplest explanations during meetings.

“It’s like the little things that you have never really noticed,” Koonce said. “He’s a character, he’s a free spirit. All the time at practice he be in his own world, he be powering up. He’s a fun guy to watch. You can tell that he comes in every day and he enjoys what he does.”

Whether it’s providing Adams with that daily dose of positive mindset or naturally assuming some of the leadership responsibility from his co-captains, Jones has made his presence known by being himself.

“Chandler taught me no matter how high you get in this lifetime, stay humble; be you,” second-year cornerback Nate Hobbs said. “I see him and I see a human being. Not nobody on a pedestal, not a man who’s got paid over $100 million over his career, not a guy who’s a rah-rah guy — he’s just a human being. He comes here, he does his job, he leads by example, and not by words. I think those are the best leaders. I see a real genuine man.”

It’s how he was raised, and he said his humility stems from having his dream job.

That, and building camaraderie with his new teammates, has kept a smile on his face since joining the Raiders.

“To have the opportunity to play, it’s just humbling in itself,” said Jones, whose 107 1/2 sacks rank No. 1 since he entered the league in 2012. “As long as I’ve been in the league, it was a little different going to a new team, because I haven’t done it in a while. But you kind of get that first day of school feeling, you don’t want to say or do the wrong things.

"But going through camp, learning new guys, their names, just asking about them, their families, their friends. It’s just the camaraderie, networking. I enjoy learning a new group of guys.”

There's nothing he needs to learn about former teammate Kyler Murray, and the Cardinals' star quarterback knows what he’s up against.

“He’s a student of the game, he loves it,” Murray said. “He’s like a Zen master when it comes to the art of the pass rush, all the different ways to get to the quarterback. He loves to educate other up-and-coming pass rushers. I got to see a little of that at the Pro Bowl. He just loves it. It’s hard not to respect that.”