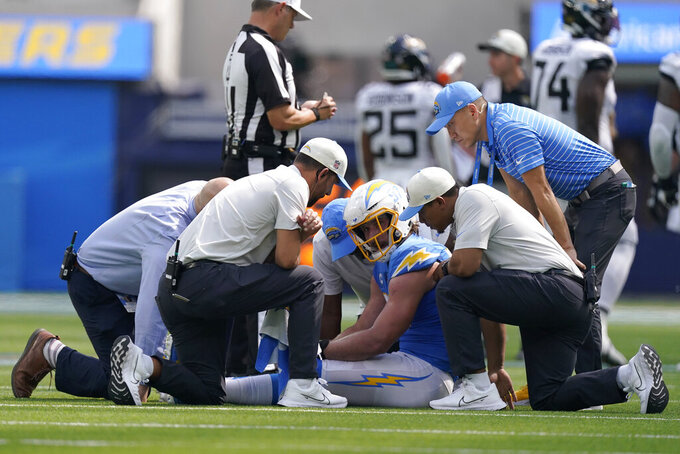 Los Angeles Chargers linebacker Joey Bosa, middle, is checked on by trainers during the first half of an NFL football game against the Jacksonville Jaguars in Inglewood, Calif., Sunday, Sept. 25, 2022. (AP Photo/Mark J. Terrill)

If the group is going to continue to make improvements, it will be without him for a while.

Bosa was placed on injured reserve with a torn groin on Wednesday. He suffered the injury during the first quarter of last Sunday’s 38-10 loss to the Jacksonville Jaguars.

The outside linebacker will undergo surgery and coach Brandon Staley said that he is hopeful Bosa can return at some point later in the season.

“He’s in a really good frame of mind. It’s never easy when you have an injury like that, because he was playing so well, but got good news on that front is that it wouldn’t be a season-ender,” Staley said.

Bosa, who is in his seventh season, was expected to team up with Khalil Mack to form one of the top pass rushing duos in the league.

During the first two games, things had gone according to plan as they combined for 5 1/2 sacks, 20 quarterback pressures and 13 hurries.

Bosa said leading into the Jacksonville game: "I think it’s just the beginning for us. We’re still getting used to rushing together and being out there together. I think it’s just going to get better over time.”

The Chargers were held to zero sacks, five pressures and three hurries against the Jaguars. Mack had one pressure and no hurries.

At least the Chargers — who have dropped two straight after winning their opener — still have Mack, but he is likely to see more double teams.

“That’s just a movie script. That’s not the NFL," Staley said about his level of disappointment of losing Bosa so soon into the season, especially after trading for Mack.

“Those guys were playing so well together, so that part is tough. The good news is that we do have Khalil Mack. That’s the thing about building a team, you want to build a team that can withstand the NFL because that’s part of it.”

Bosa, a four-time Pro Bowl selection, missed only one game last season. He was out for nine games in 2018 because of a foot injury.

“It’s a tough loss for our defense, for our team. Joey means a lot to us," safety Derwin James said. "He’s a guy that we count on and we’re definitely going to miss him out there, but it’s on us to have his back and hold things down until he gets situated.”

Chris Rumph II is expected to start in Bosa's place Sunday at Houston (0-2-1). Rumph was drafted in the fourth round last year and has shown steady signs of improvement. He was in for 18 snaps the first two games before seeing action on 42 of a possible 75 defensive plays against the Jaguars.

“We all want Joey back, but I look at it as an opportunity now to establish myself and show the coaches they can count on me when things like this happen,” Rumph said.

“Guys are gonna get hurt. The standard does not drop at all.”

Kyle Van Noy, who has versatility at inside and outside linebacker, could also see more snaps as an edge rusher.

Bosa is the third player this week to go on injured reserv e. Wide receiver Jalen Guyton (knee) and offensive tackle Rashawn Slater (biceps) were lost for the season with injuries against the Jaguars.

Staley also announced rookie Jamaree Salyer would be the starting left tackle in place of Slater.

Salyer was drafted in the sixth round and was mainly at guard during training camp, but he played both tackle spots at the University of Georgia. He started 11 games at left tackle last season when the Bulldogs won the national championship.

For all the bad news about injuries, the Chargers did get some encouraging news on Wednesday. Quarterback Justin Herbert (ribs) did not come out of the Jacksonville game with any setbacks while tight end Donald Parham (hamstring), center Corey Linsley (knee), wide receiver Keenan Allen (hamstring) and cornerback J.C. Jackson (ankle) were limited in practice after being inactive last Sunday.